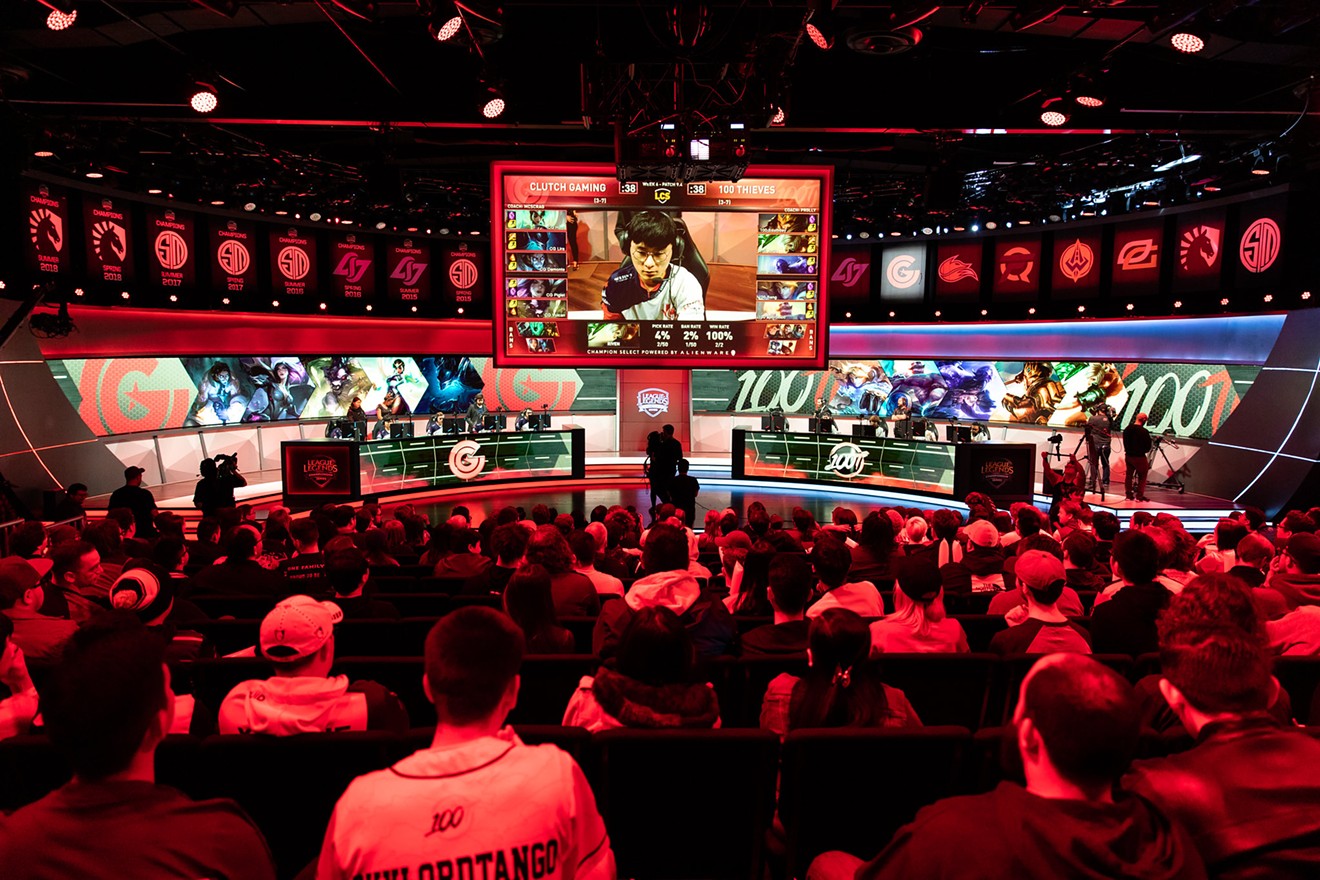 View from the audience during the 2019 LCS Spring Split, Clutch Gaming vs 100 Thieves Photo by Sandra Chen
With their in-house esports franchise, Clutch Gaming, Tilman Fertitta and the Rockets hope to capitalize on a rapidly growing global market, while leading the industry's growth in Houston.

In 2019 the global esports industry is expected to top $1 billion for the first time. After decades of failed leagues, bad investments and cultural obscurity, the world of professional video gaming has somehow shot into the mainstream.

While domestically the industry has struggled to escape the shadows of cultural irrelevance, overseas esports have been wildly popular for decades — particularly in cities like Seoul, Berlin and Stockholm, the foremost hubs of professional gaming. However, in recent years cities like L.A. and San Francisco have led an American esports renaissance, largely on the back of one game: League of Legends.

This week Clutch Gaming players have been flown back to Houston from their respective off-season homes to attend a Clutch Gaming meet and greet at Comicpalooza.

"Going for League of Legends was a moonshot," says Sebastian Park, VP of esports for the Rockets. "It's the biggest game in esports with the most established league [and] the creation of the franchise system. It just seemed like a great combination for us."

Why a moonshot? In 2017 the Rockets paid a cool $13 million to become one of three new franchise owners in the restructured and newly franchised League of Legends Champions Series  The LCS is the North American branch of professional leagues owned and operated by Riot Games, the developer behind League of Legends.

From left to right: Huni, Lira, Damonte, Piglet, Vulcan
Photo by Sandra Chen
Since 2009 the online battle arena game has been one of the most popular video games in the world, and by far the most viewed professional game in esports. Along with titles like Fortnite, Overwatch, Rocket League and DOTA 2, and with the partnership of streaming platforms like Twitch and YouTube, its popularity has helped skyrocket esports into the global zeitgeist.

Park, who had previously managed two professional teams on the West Coast, was recruited by Fertitta in 2016 to oversee his franchise's esports division. It was Parks' suggestion that led to the team's acquisition of an LCS franchise. The Rockets see their multi-million dollar buy-in as an ultimately long term investment in a still nascent industry. A strategy that is, not coincidentally, reflective of Houston's growing esports scene.

From the development of esports departments at both UH and Rice, to the popularity of the city's professional Overwatch team, the Houston Outlaws, Houston is emerging as an early industry adopter outside California — a reality that is as much an opportunity for Clutch Gaming as it is a challenge.

"Houston's a big city," says Park, "one of the challenges we have is finding ways to service all the different neighborhoods." As with traditional sports, the key to success is generating viewership, something commonly achieved through officially sponsored viewing events called watch parties. While Clutch Gaming hosted several watch parties last year, and earlier this year during its spring tournament, Park admits the sheer size of the Houston area presents a unique challenge in terms of reaching its audience.

Another challenge? The complexity of the game. Unlike more commercially popular games like Fortnight and Call of Duty — fast paced shooters with easy to follow game play — battle arena games like League of Legends are strategy based. Matches are played in a large scale arena, with two teams of five starting at each end. The core objective: to destroy the opposing team's home base. League matches can take up to an hour, and like football or basketball, each player has a specific role to play. Throw in the game's dozens of special items and hundred of characters with unique abilities, and even with expert commentary League of Legends game play can be extremely confusing to a novice viewer.

Clutch gaming head coach Brandan McGee (right) talks to LCS broadcaster Pastrytime (left)
Photo by Sandra Chen
"Yes it's a barrier, but it's also a moat." Park draws parallels between League of Legends and football. "Who really knows what defensive or offensive pass interference really looks like? Once you get a sense of how many guys should be on the line or what pass interference looks like, you get more invested in football. Similar to League of Legends." The young esports veteran and Rockets exec sees the game's complexity as his team's best asset for fan retention.

Clutch Gaming's players are currently enjoying their off-season after a disappointing outcome in the 2019 LCS Spring Split (in League of Legends lingo, split mean tournament). The league's seasons are divided into a spring and a summer split, followed by playoffs and a league championship at the end of the year. For professional esports athletes, off-seasons mean heavy training regiments both at the computer and in the gym, as well as occasional team appearances.

For team officials like Park and head coach Brendan McGee (mscrag), the off-season is a time to focus on making key trades and acquisitions in advance of the upcoming summer split. While Clutch Gaming showed early potential in their first tournament, clinching a playoff spot in the 2018 Spring Split, this March they made an early exit, finishing second to last with a record of 5-13. The result was disappointing, but not unusual for a new organization still finding it's footing in one of the industry's most competitive and well established leagues.

While that footing gets found, the team is open to fan engagement, questions and even suggestions. Park encourages anyone with an interest in esports, questions about the team or ideas for their development to reach out via twitter. "We're constantly trying to figure out better ways to engage the audience," he says.

If you have questions for Sebastian Park or the Clutch Gaming organization, want to keep up with their matches, watch parties or team news, follow both on twitter at https://twitter.com/SebPark  and https://twitter.com/ClutchGaming
KEEP THE HOUSTON PRESS FREE... Since we started the Houston Press, it has been defined as the free, independent voice of Houston, and we'd like to keep it that way. With local media under siege, it's more important than ever for us to rally support behind funding our local journalism. You can help by participating in our "I Support" program, allowing us to keep offering readers access to our incisive coverage of local news, food and culture with no paywalls.
Make a one-time donation today for as little as $1.