Mayor Turner Will Fast-Track The Removal of Confederate Monuments 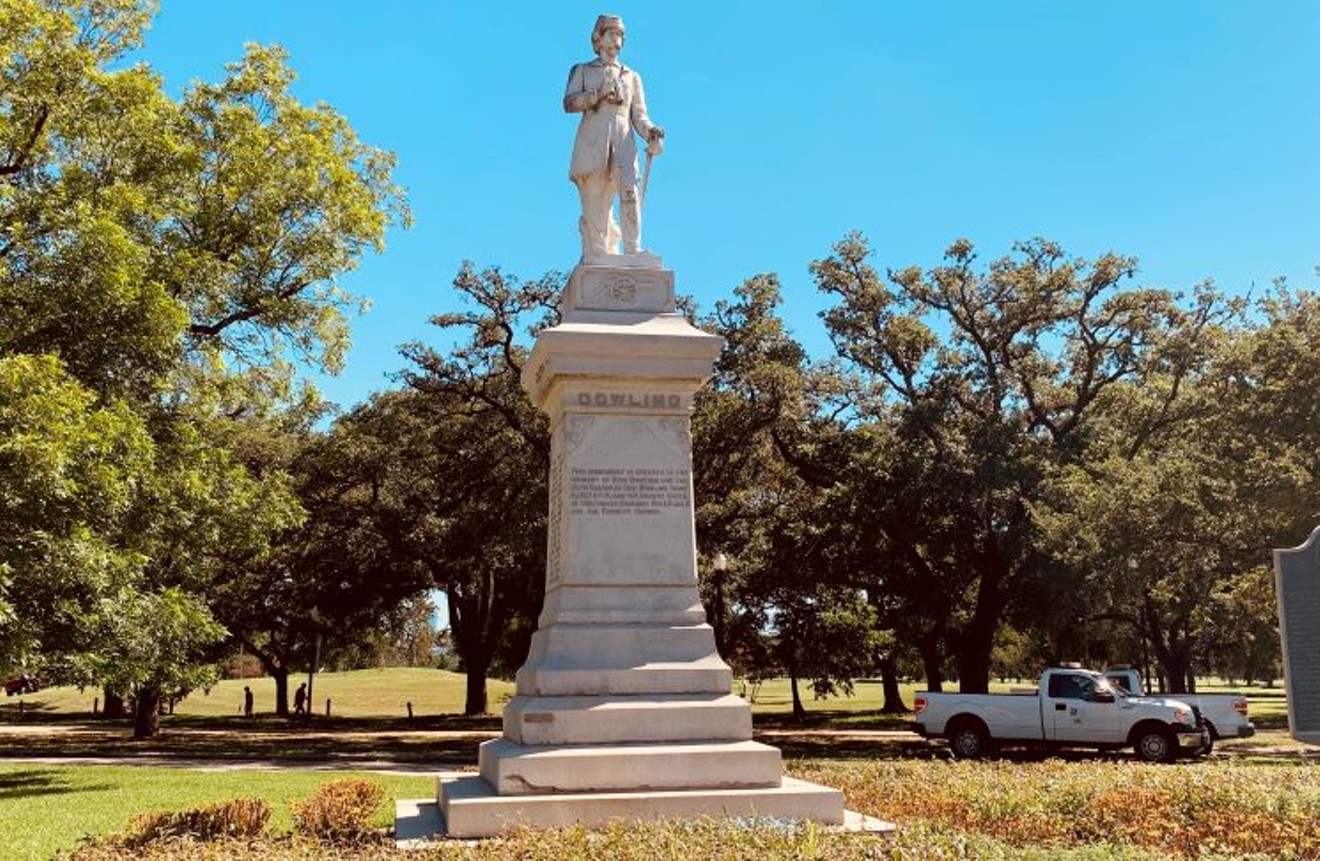 Dick Dowling will be leaving us. Photo by Kate McLean

Mayor Sylvester Turner announced Thursday the intended removal of two confederate statues will be expedited to happen before Juneteeth, the observance on June 19 of the day in 1865 when slaves in Texas were read the Emancipation Proclamation.

"Our plan for relocating confederate statues from public parks to locations more relevant to modern times preserves history and provides an opportunity for our city to heal," Turner stated in a press release.

Both the statues of Richard "Dick" Dowling in Hermann Park and the Spirit of the Confederacy in Sam Houston Park, aren't bound for the quarry, however.  Turner, who created the City of Houston Confederate Items Task Force in 2017, was advised by a collection of historians, community leaders, and department directors that it would be better to relocate these statues instead. The move won't happen at the expense of taxpayers.

The Houston Endowment has provided a grant to transfer the Spirit of the Confederacy to the Houston Museum of African American Culture. John Guess, CEO Emeritus of the HMAAC, stated in the release: "We have an opportunity to learn from our history, the good and the bad, to truly forge one nation."

The statue of Richard "Dick" Dowling, will likely be moved to the Sabine Pass Battleground State Historic Site in Port Arthur.  Irish-born Dowling received accolades for his command in the Confederate victory at Sabine Pass in 1863.  This statue, introduced in 1905, was commissioned thanks to the fundraising efforts of the United Confederate Veterans, as well as George Hermann, whose statue is located nearby.

"While we have been working on a plan for some time, I have decided to move forward now considering the events of the past several weeks," Turner stated in a press release.

The announcement of the statues' quick removal follows Turner's signing an executive order limiting the use of deadly force by the Houston Police Department. Turner announced his intention to do so Tuesday at the funeral for George Floyd, who died while in the custody of Minneapolis police.

The order will require more emphasis on de-escalation techniques as well as ban neck restraints and chokeholds, that is unless it's "objectively necessary." The order also forbids an officer placing weight on the neck of a suspect, which is believed how Floyd lost his life two-and-a-half weeks ago, along with new "duty to intercede" rules. Three officers stood idly by while Floyd was restrained.

In addition, the order prohibits an officer shooting at a moving vehicle, again, unless it's "objectively reasonable," and prohibits "no knock warrants" without HPD Chief of Police approval.

Another change Texas will see, spearheaded by Rep. Garnet Coleman (D-Houston), is that the Texas Commission on Law Enforcement, an agency that regulates all law enforcement in the state, has agreed it will now make implicit bias training mandatory for all officers.

The national conversation to remove confederate symbolism in the form of flags, statues, and other images emerged in the aftermath of the Charleston, SC church massacre in 2015, in which nine African Americans were killed while attending a Bible study.

The task force started by Mayor Turner was established to review confederate symbolson Houston public property and to offer recommendations about what should be done with them.

Two murals located in the Julia Ideson building as well as the two statues were flagged as "specific items for consideration," by the task force according to a final report given in March 2018.  While ultimately the decision rests with the mayor, the task force recommended the murals, both depicting homes of Robert E. Lee and former president of the confederacy Jefferson Davis, remain but that signage be added to give context to the "time and reason for which they were commissioned and displayed."

Both statues, which will be removed from Houston public property starting next week, might end up in temporary storage for the time being.
KEEP THE HOUSTON PRESS FREE... Since we started the Houston Press, it has been defined as the free, independent voice of Houston, and we'd like to keep it that way. With local media under siege, it's more important than ever for us to rally support behind funding our local journalism. You can help by participating in our "I Support" program, allowing us to keep offering readers access to our incisive coverage of local news, food and culture with no paywalls.
Make a one-time donation today for as little as $1.