Tropical Storm Ida on a B-Line for Louisiana 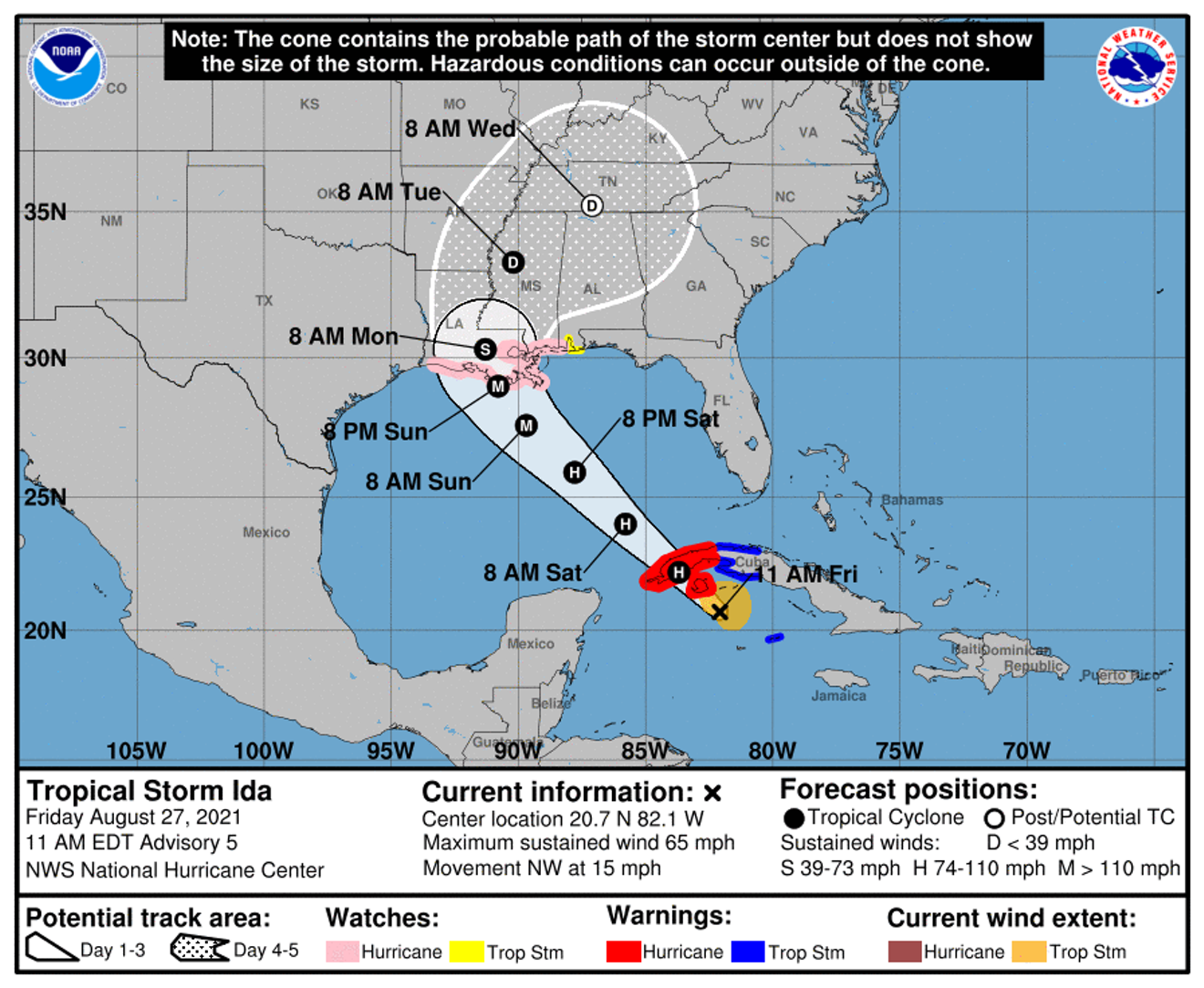 Soon-to-be Hurricane Ida is heading for Louisiana this weekend. National Hurricane Center
The tropical depression we discussed yesterday is now Tropical Storm Ida churning away in the Caribbean on its way to the Gulf of Mexico. The National Hurricane Center now believes Ida will reach major hurricane strength (category 3 or higher) before making landfall somewhere along the Louisiana coastline Sunday evening.

In fact, the NHC believes Ida will reach hurricane strength before crossing the western end of Cuba sometime Friday night. Once it reaches the Gulf of Mexico, it unfortunately faces absolute optimal conditions for further intensification as it moves northwest at a fairly rapid pace.

Not only are Gulf waters warm, but wind shear, which can inhibit the growth of hurricanes will be low throughout the forecast period. In addition, there is a very warm area of water just southeast of Louisiana. This "eddy" occurs in the Gulf each summer. Crossing that could lead to rapid intensification of Ida as it approaches landfall.

In 2005, two storms, Hurricane Katrina and Hurricane Rita, both crossed a similar eddy as they traversed the Gulf leading Rita to briefly reach category 5 status before weakening as it approached land.

People along the Louisiana coast line, particularly those in the central and eastern part of the state including New Orleans, need to prepare now for a landfall in just a couple days. The storm will have a rather large wind field meaning areas many miles from the center will experience hurricane force winds. The entire coastline heading east will get huge amounts of rainfall as well, but the storm should clear the area quickly.

For Houston, the result of Ida will likely be much warmer temperatures this weekend. The western side of storms tends to draw in warm, dry air and this should be no exception.

And while our area may have dodged a bullet, we are just now entering the peak of hurricane season with roughly four weeks left for Texas before things die down until next year, so be vigilant.
KEEP THE HOUSTON PRESS FREE... Since we started the Houston Press, it has been defined as the free, independent voice of Houston, and we'd like to keep it that way. With local media under siege, it's more important than ever for us to rally support behind funding our local journalism. You can help by participating in our "I Support" program, allowing us to keep offering readers access to our incisive coverage of local news, food and culture with no paywalls.
Make a one-time donation today for as little as $1.