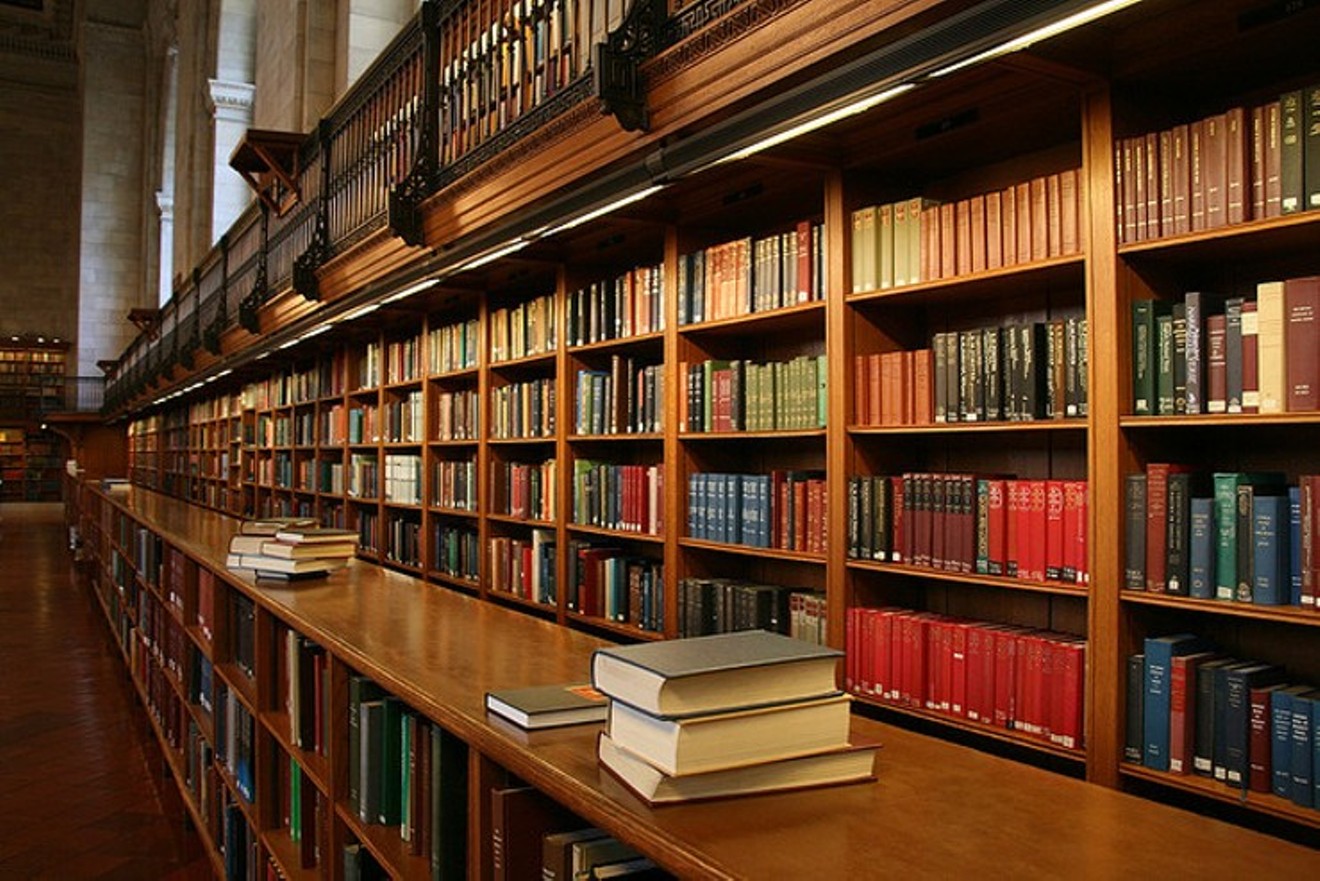 Not cracking a book at the Houston Public Library anytime soon. Photo by Flickr/Viva Vivanista
Update 9 a.m. 3-16-30: Governor Abbot has announced he has waived the State of Texas Assessments of Academic Readiness (STAAR) testing requirements for the 2019-2020 school year.  He is also asking that the Department of Education waive federal testing requirements for this school year. There is a real possibility that students in the Houston area could miss the rest of the regular school year.

Well it's Monday morning, it's a new day and the Houston Public Library has closed up shop. The main downtown library and all of its branches are shuttered because of the coronavirus. They'll let us know when they open their doors again. Update 4:30 p.m. 3-17-20: It was just announced that all Houston Public Library locatiosn will be closed through the end of the month of March.

It is an understandable effort to prevent transmission of the virus, Practical. Trying to avoid a spike in cases.  And yet at the same time, so, well sad. Kids are off school and not many people want to sit in a movie theater and group gatherings are discouraged — and now they can't go to the library either.

The announcement made late Sunday reminded one and all that the HPL offers "many free online resources and digital services [that] are always available 24/7 with your MY Link Library Card at www.houstonlibrary.org, including e-books and e-audiobooks, streaming TV, movie and music services, online classes and tutoring, and databases." Not only is that not the same, but it's also not accessible for some people who don't own the devices needed to use e-books for instance.


In other news, Gov. Abbott waived regulations to make sure students in work-study programs whose campuses have closed (so they can't do their work-study) will continued to be paid.

The governor also Sunday "waived state laws that prohibit trucks from the alcohol industry from delivering supplies to grocery stores. This will provide grocers with another private-sector option to keep their shelves stocked."

These two waivers followed his Saturday action directing the Texas Medical Board and the Texas Board of Nursing "to fast-track the temporary licensing of out-of-state physicians, physician assistants, certain retired physicians, nurses, and other license types to assist in Texas' response to COVID-19."

Out-of-state physicians will be able to get a Texas limited emergency license or hospital-to-hostpiral credentialing through this action. The medical group is also urging retired physicians who have been on official retired status for less than two years to apply to become active again.

And pulling out all the stops, Houston Mayor Sylvestor Turner, certain council members, and representatives from H-E-B, Kroger and Randalls will be on hand for an 11 a.m. press conference Monday to appeal to local residents to stop acting like idiots by stockpiling groceries and supplies.

Boys &  Girls Clubs of Greater Houston announced late Sunday that it is suspending programming starting Monday with no end date in sight. According to a press release they realize that "so many other entities are cancelling and closing," and are exploring "alternative ways to provide programming and services" for their members.

The Houston Latino Film Festival to be held March 19-22 has been postponed because of coronavirus. All tickets will be honored for admission fo rthe rescheduled festival sometime later this year.

FotoFest which previously postponed its public programs, Sunday announced the temporary closure of its Biennial 2020 exhibitions African Cosmologies at Silver Street Studios and Winter Street Studios, and Ten by Ten at the Silos at Sawyer Yards.

There will be no jury trials and no jury duty in the City of Houston Municipal Courts through March 31. Their detailed notice:


NO Jury Trials. If you are a DEFENDANT scheduled for a JURY TRIAL during this period, you do not have to appear. You must reschedule your jury trial setting in person no later than Monday, April 6, 2020 until 9:00p.m., to receive a new jury trial date. All jury trials will resume Wednesday, April 1, 2020 unless further notification is provided. It is important to note that if an individual fails to reset their case(s) during the reset period (3/16/2020 through 4/6/2020), an arrest warrant may be issued.

NO Jury Duty. If you are a Juror and have been scheduled for Jury Duty, you do not have to appear during this period. You do not need to reschedule your jury service.

Arraignments, Trials by Judge, Parking Adjudication Hearings and all other proceedings. Individuals who are scheduled for any other court settings are expected to appear in court for their scheduled setting.

Old Settlers Music Festival will be rescheduled for the fall.
KEEP THE HOUSTON PRESS FREE... Since we started the Houston Press, it has been defined as the free, independent voice of Houston, and we'd like to keep it that way. With local media under siege, it's more important than ever for us to rally support behind funding our local journalism. You can help by participating in our "I Support" program, allowing us to keep offering readers access to our incisive coverage of local news, food and culture with no paywalls.
Make a one-time donation today for as little as $1.