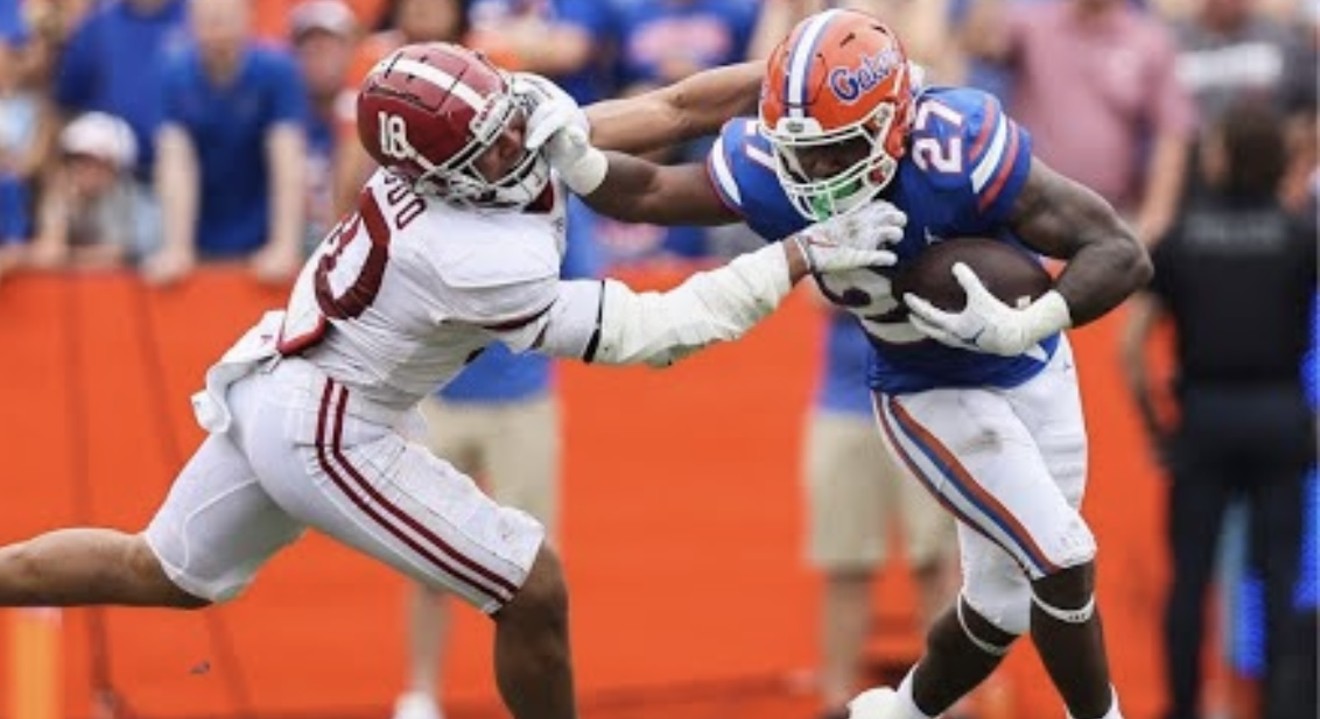 Dameon Pierce is going to be a beast on and off the field. Screen grab from YouTube
Hey, let's send people home for the long weekend on a high note, shall we?

But I bring you good news today, Houstonians! Tidings of great joy upon you, as the clouds have broken and it would appear that the Houston Texans have selected a more than competent running back in the draft a couple weeks ago. Not only that, but it would also appear they have brought in one of the most vibrant and fun personalities that we've seen in a Houston athlete in quite some time.


It’s the energy for us! @IRep229 pic.twitter.com/mZJcW7ZDMA

A good time AND a long time!?  How can you not like this guy?! Of course, it is essential that he actually be able to tote the rock, so I'll let you be the judge on that one. Here are Pierce's highlights from his final season at the University of Florida in 2021:
Not bad, not bad at all.

But that's just the beginning. What I learned, after doing extensive internet research on Pierce is that he brings it in a press conference atmosphere, as well. Let's go on a bit of a journey here, as we get to know the man who will undoubtedly become a crowd favorite, Dameon Pierce.

Let's start with this press conference from his senior year at Florida, where he grabs a reporter's iPhone and brings it up to the podium with him. It appears this particular reporter had another reporter named Cassidy on FaceTime, and Pierce wanted to give Cassidy the experience of what it looks like to do a presser from Pierce's first person point of view:
Good stuff! Now, how about this one, where a reporter (named "Edgar," evidently) seemed to try to get Pierce to bite on a "gotcha" question about Alabama, and he sniffed it out immediately!
Now, it's all well and good if Pierce were just some comedy hound, who was trying to be the life of the party all the time, but one thing I learned in my research about Pierce — he freaking loves to play football! To wit, his Florida team his senior year was relegated to playing in a lower level bowl game called the Gasparilla Bowl.

I have no clue where that game is played, nor what a "Gasparilla" is. However, I do know it's a bowl game that a lot of kids in Pierce's situation, with a pro career looming, would have skipped to avoid injury. Pierce is the opposite of that. He wanted to play because he made a commitment to Florida and his teammates. Behold, the loyal one, Dameon Pierce!
From the bowl game, we now move to the Senior Bowl, where Pierce showed enough for the Texans to jump on him at the 107th overall pick. Here is an impromptu interview Pierce did with an aspiring scout. The best parts — first, the part where he makes the interviewer introduce himself (people skills!), and second, where he gives an OUTSTANDING answer on what NFL teams look for in running backs. Enjoy this one....
We learned last week that Pierce will wear jersey number 31 this season, which should officially put to rest any chance that David Johnson (the now former number 31, and walking poor return from the DeAndre Hopkins trade) returns to the Texans in 2022. This is great news, for it is the dawning of a new era — ALL HAIL, THE AGE OF PIERCE!