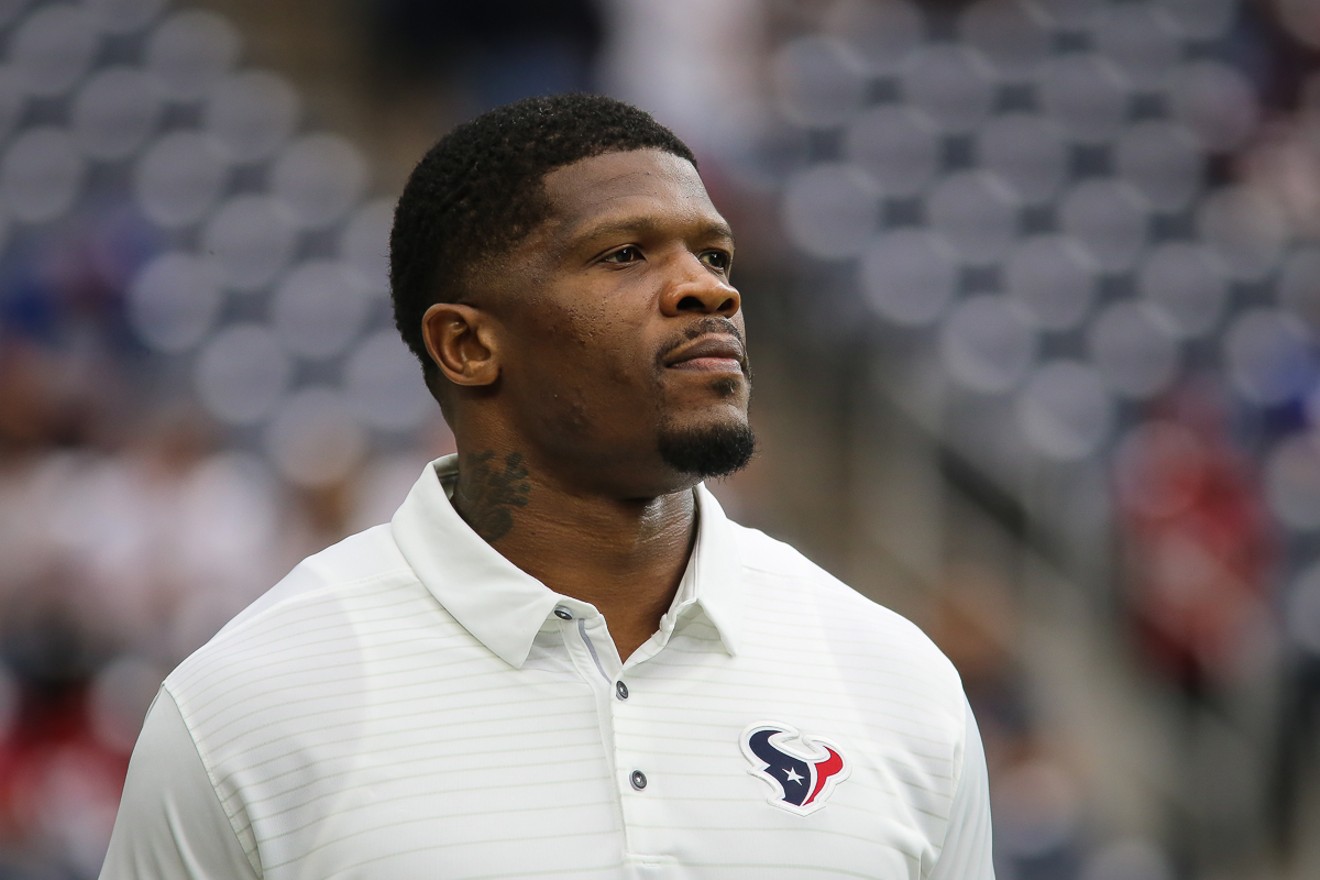 Andre Johnson is back in the building over at NRG Stadium. Photo by Eric Sauseda
We knew, toward the end of Andre Johnson's NFL career, a 14 year journey that was Hall of Fame level for a dozen of those seasons here in Houston and then ended somewhat sadly with a season and a half in Indianapolis and Tennessee, that Johnson was going to make Houston his long-term home. He was building a palatial estate for his retirement years, and seemed to understand the degree of equity he carried in this town.

Upon retirement, Johnson actually had been far more visible than I think many anticipated he would be, given his uber-understated personality and demeanor in growing his resume as a Texans legend from 2003 through 2014. He was a frequent guest of ours on the Texans pregame show (a VERY public appearance every home Sunday, as the show takes place smack dab in the middle of Bid Plaza... oh, and Dre drew MONSTER crowds), he did some Texans ambassador work, and he was inducted as the first and still only member of the team's new Ring of Honor.

Johnson had also spent a lot of time around the team, flying to West Virginia for parts of training camp, and helping out around practice. If there was a post-career path Johnson appeared to be taking, it was in some sort of role with the Texans. Now, with news first reported by John McClain of the Houston Chronicle on Friday, the journey for Johnson has officially begun:

The Texans have hired former WR Andre Johnson as a special adviser to coach Bill O'Brien. Johnson, who's been retired for 2 years, will have a lot of duties in his newly created position. He's the team's all-time leading receiver and the only member of the team's Ring of Honor.


Because Andre Johnson is going to work with Bill O’Brien and Brian Gaine, he’ll learn about both departments - scouting and personnel. He’ll have different responsibilities.

Good for Andre, good for the Texans. I'm happy about this, as I am a fan of all parties involved, and I am a fan of organizations taking care of their former players in some way in retirement, as I have had many conversations with former players about just how difficult, and sometimes life threatening, that transition can be.

That's actually a good place to begin with my four thoughts on Andre Johnson's news on Friday, specifically:

Andre Johnson is the fourth former Texan to be hired by O'Brien this offseason:
Johnson joins former linebacker Brian Cushing (assistant strength and conditioning), former quarterback T.J. Yates (offensive assistant), and former linebacker Akeem Dent (defensive assistant) as former O'Brien Era (and in the case of everyone except Dent, former Kubiak Era) players. The NFL taking care of its retired players has been a hot button topic for a long time, and usually it centers around players far less well off physically than the four O'Brien hires, but this is one more way that the NFL can subtly take care of at least a small portion of its players. If they show an interest in coaching or personnel, identify them and hire them as shortly after retirement as possible, so there is no wallowing in the vacancy of retirement. I'm not saying treat players like charity cases, but giving them priority in entry level positions, and letting them continue to be around the game in some way can be beneficial for both sides, and hardly bank-breaking to these multi-billion dollar enterprises.

What exactly does Andre Johnson want to do long-term?
The answer is almost assuredly that he doesn't quite know yet. We don't even know WHEN being part of the Texans staff was something he was even considering. Johnson will be working for both O'Brien and Gaine, so he will likely get a taste of what it's like as an assistant coach (and likely even lower on the ladder), and a taste of the grind that scouts go through, which is probably a far less familiar area to him, and one with ultimately, far more travel and time away from the family. I have no idea which one will appeal to Johnson more, as it's probably as much a choice on lifestyle as it is skillset, but I think he has the respect, demeanor, and football acumen to excel at either one.

Good to see both sides forgive and forget over the Texans' releasing Johnson after 2014.
Things weren't always as cordial between the two sides, Johnson and the Texans, as they are now. His release from the team after the 2014 season, when DeAndre Hopkins had clearly taken the baton as the team's number one wide receiver, was contentious, at least on Johnson's side:

Andre Johnson couldn't believe what he heard next. O'Brien told him he'd only start certain games next season. That he'd only catch around 40 passes — less than half his career average. Johnson's role, apparently, was shrinking.

The receiver shook his head. Then he laughed. It's all he could do.

"You should trade me or release me," Johnson told O'Brien. "Because if that's going to be how it is, you're going to have a player who's miserable."


Now, as it turns out, O'Brien was right. Johnson caught 41 passes for the Colts in 2015. He was out of the game less than a season later, in 2016. So now, the two of them, O'Brien and Johnson, are back together. NFL players and coaches, by and large, have a much shorter "grudge span" than fans and media think they do.

... oh, and over Johnson's comments on Arian Foster's podcast.
To wit, despite Johnson's claiming, on Arian Foster's podcast, that he thought of skipping the Ring of Honor ceremony, because of the late Bob McNair's "inmates running the prison" comment, among other things he and Foster chuckled at on the podcast, the Texans are happily bringing him back. The bottom line is that it's good to see everyone involved not let a few slick patches in the overall relationship let things get sideways for the long haul.