Taylor's offense was stuck in mud in the second half for the second straight week. Photo by Jack Gorman
When the Houston Texans were turning the Tennessee Titans over five times last week, just like they'd done to the Miami Dolphins the week before, then we could overlook the fact that the Texans' final six drives of the game were a total of just 18 plays for a total of 7 yards. After all, the Texans won.

Well, we found out on Sunday, in this return home to NRG Stadium, exactly what it looks like for the Texans when they're not forcing massive amounts of turnovers. Even a statistically poor defense like that of the New York Jets can help steal a win on the road. In the second half of Sunday's 21-14 loss to the Jets, the Texans had five drives, 19 plays, and generated just 45 yards. That's anemic, it's awful, and it's unacceptable.

On Sunday, there were winners and losers beyond the scoreboard, here are a few of them:

Rookie Nico Collins getting some targets was a welcomed sight.
Photo by Jack Gorman
4. Rookies on offense
As the season winds down, it is going to be more and more important for the Texans to figure out what they have with some of the young players in the building. On offense, I find it encouraging that rookies WR Nico Collins and TE Brevin Jordan are getting more and more snaps, and targets at crucial times during the game. Jordan had his second career touchdown early in the second quarter, and Collins had a couple catches in the first half before the offense went into quicksand in the second half. It's the little things at this stage of a lost season, but I am optimistic about Collins and Jordan.

3. Tytus Howard's move back to tackle
The team was awful again offensively on Sunday, so without having rewatched the game yet, it's hard to imagine anybody playing super well on offense, especially along the offensive line. However, the fact that Howard was moved from left guard to left tackle is a positive for his career trajectory. He'd spent the last two seasons as the team's starting right tackle, and was serviceable enough. His move to guard has been a disaster. Perhaps Howard getting in six games worth of snaps as the left tackle will get him back on track, and certainly make him more worthy of his fifth year option being exercised. 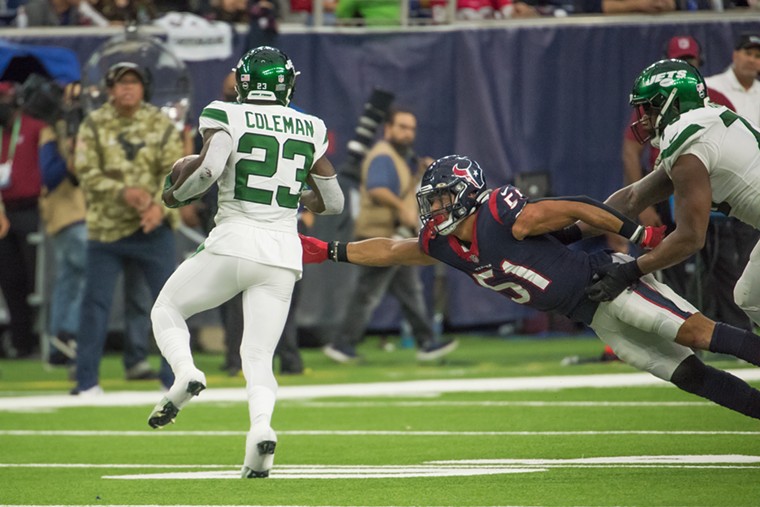 Kevin Coleman led the Jets with 16 carries for 67 yards.
Photo by Jack Gorman
2. Jets running game
Credit Mike Lafleur, the Jets' offensive coordinator. Early in the game, a rusty Zach Wilson was really struggling, so LaFleur started to lean on the Jets' running game, repeatedly pounding the edges of the Texans defense with Tevin Coleman, Ty Johnson, and Austin Walter. "WHO?!?" you might be saying. EXACTLY. The Jets were without their stud rookie RB Michael Carter, and it didn't matter. The Jets found great success running the football, and that took some of the heat off Wilson. The Jets' running backs finished with 31 carries for 147 yards. For what it's worth, the Texans' running backs finished with 22 carries for 66 yards. Woof.

1. Robert Saleh
Back when the Texans were searching for a head coach in January, it was widely hoped for, among Texans fans, that Saleh, the defensive coordinator for the 49ers the last few seasons and a former Texans assistant during the Kubiak Era, would be among the highly considered candidates. not only was he not strongly considered, he didn't even get an interview. While I'm guessing Saleh is not a major grudge holder (he seems very well adjusted for a football lifer), it had to feel good completely coaching circles around this Texans staff once the Jets fell behind 14-3.

4. Bill O'Brien and Doug Marrone
The Alabama Crimson Tide were incredibly fortunate to emerge victorious over Auburn this weekend in the Iton Bowl. For 59 minutes and change, the Bama offense had been held out of the end zone, but they were able to put together a 97 yard drive in under two minutes to force overtime, and then won by a final of 24-22 after four overtime periods.  So maybe the win for the Tide masks the extreme hatred for O'Brien (the team's IOC) and Marrone (the team's offensive line coach, and best friend of O'Brien), but boy it was rough for most of the day on social media for both coaches:

“Bill O’Brien” and “Doug Marrone” columns on my Tweetdeck are 🔥🔥 pic.twitter.com/B9JFWVW8hQ

O'Brien's name has been mentioned for some prominent college openings, including LSU. If this is how O'Brien handles an NRG Stadium crowd, though, I don't think he would do well in Death Valley:

3. Justin Reid
It seems like every week, there is a "HOLY BLEEP" name on the Texans' inactive list. (Ironically, the most newsworthy name on that list each week is Deshaun Watson, but we know the deal with that.) This week it was safety Justin Reid, who's been one for eh team's more impactful players this season, and whose benching was definitely not due to the quality of his play. This was confirmed by Aaron Wilson with this report before the game on Sunday:


Justin Reid had a "disagreement" with the coaching staff, per a league source, in advance of being a healthy scratch today. David Culley is maintaining consistency in how he handles individual player situations.https://t.co/lsstCGYC2A

Shortly thereafter, Mark Berman of FOX 26 actually spoke to Reid, and here was his side of the story:


#Texans safety Justin Reid (@JustinqReid) on being inactive today for disciplinary reasons: “I’m actually really shocked at (Coach David) Culley’s decision to make me inactive. I couldn’t believe it.” Justin didn’t want to go into any details yet about what happened other than.. pic.twitter.com/H9WzKczHtM

I'm not sure what to make of all this, other than I am guessing Justin Reid leaves here in free agency after the season, for sure.

That's a total of 53 plays for 97 yards. That's embarrassing. There's a lot wrong with this team offensively, but it falls at the feet of Tim Kelly. He is in charge of the offense. He needs to be held accountable.

1. Ross Blacklock
Perhaps the best thing to happen to Blacklock is the presence of David Johnson, who is widely viewed as the anger-inducing face of the horrific DeAndre Hopkins trade. Johnson's lackluster running skills (and believe me, I am being kind in that description) make many Texans fans forget that the second round pick that came back for Hopkins was used to select Blacklock, who couldn't get on the field as a rookie last season, and who had back to back bone headed penalties in the third quarter — a leverage foul on a Jets made field goal that gave them a second chance at a touchdown, then an offsides penalty on 1st and goal on a play where the Texans sacked Zach Wilson. This came after a game last week in which Blacklock lined up in the neutral zone twice in the win over the Titans. Blacklock is improving as a player, but not to the point where he is worth these stupid penalties.