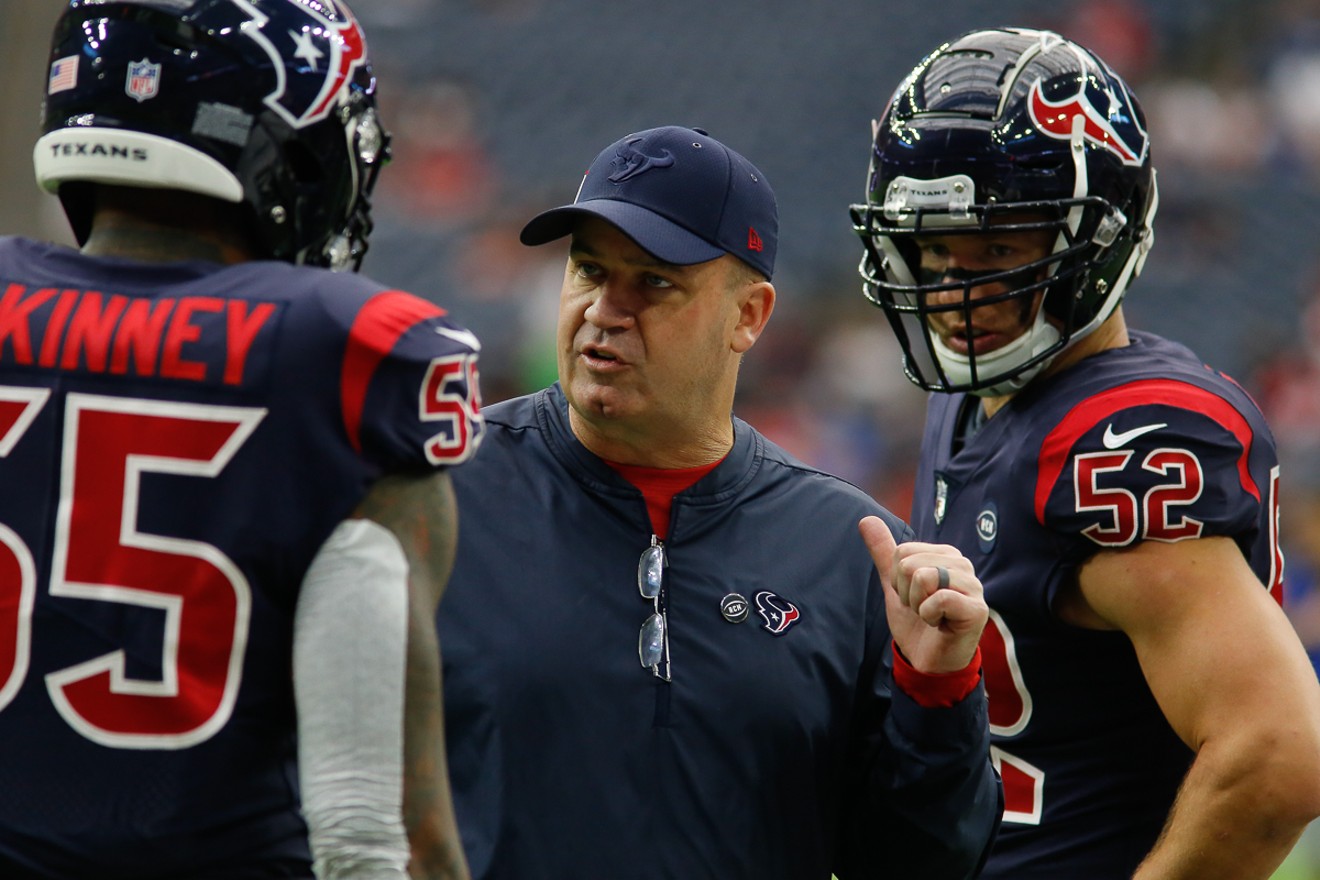 Bill O'Brien's 2019 gauntlet has now been released, and it's pretty damn tough. Photo by Eric Sauseda
Since the end of the 2018 regular season, we've known who the Texans' opponents would be in 2019, and we knew where they would be playing each of them, but we didn't know exactly when and in what order. Well, that was unveiled on Wednesday night, and without further ado, here you go:

So, on Tuesday, I begged the NFL schedule maker to consider five things when putting the Texans' schedule together. Let's see how accommodating they were:

Give the Patriots to the Texans early in the season again
This may sound counterintuitive, what with the Texans bowing down to the Patriots on or before Week 3 in each of the last three seasons, but it's not like catching the Pats late in the season is super ideal either. Also, this time the game is at home, and this time the Patriots are dealing with REAL problems in the offseason — free agency defections, Gronk's retiring, their owner getting pinched for visiting a sex parlor massage, among other things. Maybe not the opening weekend, but I wouldn't mind seeing the Patriots in September again.


RESULT: Not only did they push the Patriots game into December, but they put it on national television in a Sunday night game. I don't like that at all.

Please, no visit to New Orleans in prime time
The less gassed up the drunk Cajun crowd can be for a game in the Superdome, the better. A nice noon start on a Sunday buried in the middle of the schedule would benefit the Texans greatly for what will surely could one of the more fun inter-conference matchups of the season, if the Texans' offense takes another step forward in 2019. A healthy Will Fuller and Keke Coutee will help greatly. The Saints playing at home in prime time has always been a problem for road teams.


RESULT: They open the season in New Orleans on Monday Night Football. Let's just move on.

No trip to Baltimore or Kansas City in December
Cold weather sucks, for anybody, but it really sucks for a team whose offense is probably going to need to score 31 points on the regular just to compete for a division title. Last I checked, the weather in Baltimore and Kansas City is really awful in December, not to mention that those are two of the hardest places for a road team to play even when it's 65 and sunny.


RESULT: They did okay here, scheduling the Kansas City road game in Week 6, and putting the Baltimore game in a fairly manageable Week 11 spot, coming off of the bye week following the trip to London to play the Jags.

Schedule the road game with the Chargers reasonably
The Texans don't get too many trips to the West Coast on their schedule, but the last couple times they have, the league hasn't done them any favors. Back in 2014, the Texans had to travel to Oakland in Week 2 (a win in Bill O'Brien's second game as Texans head coach), and then turn around and travel to New York to face the Giants in Week 3, a 30-17 loss. Then, in 2017, the Texans had trips to Seattle and Los Angeles sandwiched around a division home game against the Colts. That whole sequence was a debacle, but to be fair, the Colts and Rams games came right after Deshaun Watson tore his ACL, so that team was seriously debilitated. Still, had Watson been healthy, and the Texans went from 3-4 to 3-6, we'd have been talking about the schedule being set up for failure.

RESULT: They were very accommodating here, with the trip to Los Angeles taking place early in the season in Week 3 in between manageable home games against the Jaguars and Panthers. Good job here.

Season Finale request — home versus the Titans, please
In the four seasons where the Texans have been relevant under Bill O'Brien, Week 17 has mattered, whether it's been to clinch a division, or to stay in the hunt for a first round bye. So let's assume that this Texans team will at least be in the mix for the postseason. They will need a win in Week 17 for SOMETHING, so why not pick the easiest possible matchup? The home game against Tennessee might be not only their easiest division game, but easiest game overall. Under Bill O'Brien, the Texans are 5-0 at home versus Tennessee, with the five games having a combined score of 168-73 (average score of 34-15).

Here are a few other observations on a schedule that is one of the more difficult ones in recent memory for the Texans:

The quarterback gauntlet early in the season is absurd
Go look at the first seven games of the season, and then remind yourself that cornerback is a position of need for the Texans... and then try not to vomit. The Texans' first seven opposing starting quarterbacks are Brees, Foles, Rivers, Newton, Ryan, Mahomes, and Luck. If you're keeping track at home, The worst three of those seven quarterbacks are the 2015 MVP, the 2016 MVP, and the 2017 Super Bowl MVP. Deshaun Watson better be ready to take another big leap forward in 2019, because he's going to find himself in some serious shootouts.

The final month of the season sets up for a late season surge
As difficult as the early season portion of the schedule lays out, the final month of the season should set the Texans up nicely to either make a run at a playoff spot, or if the season is going really well (better than I expect it to), a bye in the wild card round of the playoffs. As good as the early season opposing quarterbacks are, getting Joe Flacco, Jameis Winston, and Marcus Mariota (twice) is a gift from the football gods. Bill O'Brien is 11-5 in the final four games of the season in the four years under him in which the Texans have finished over .500 (2014, 2015, 2016, 2018).