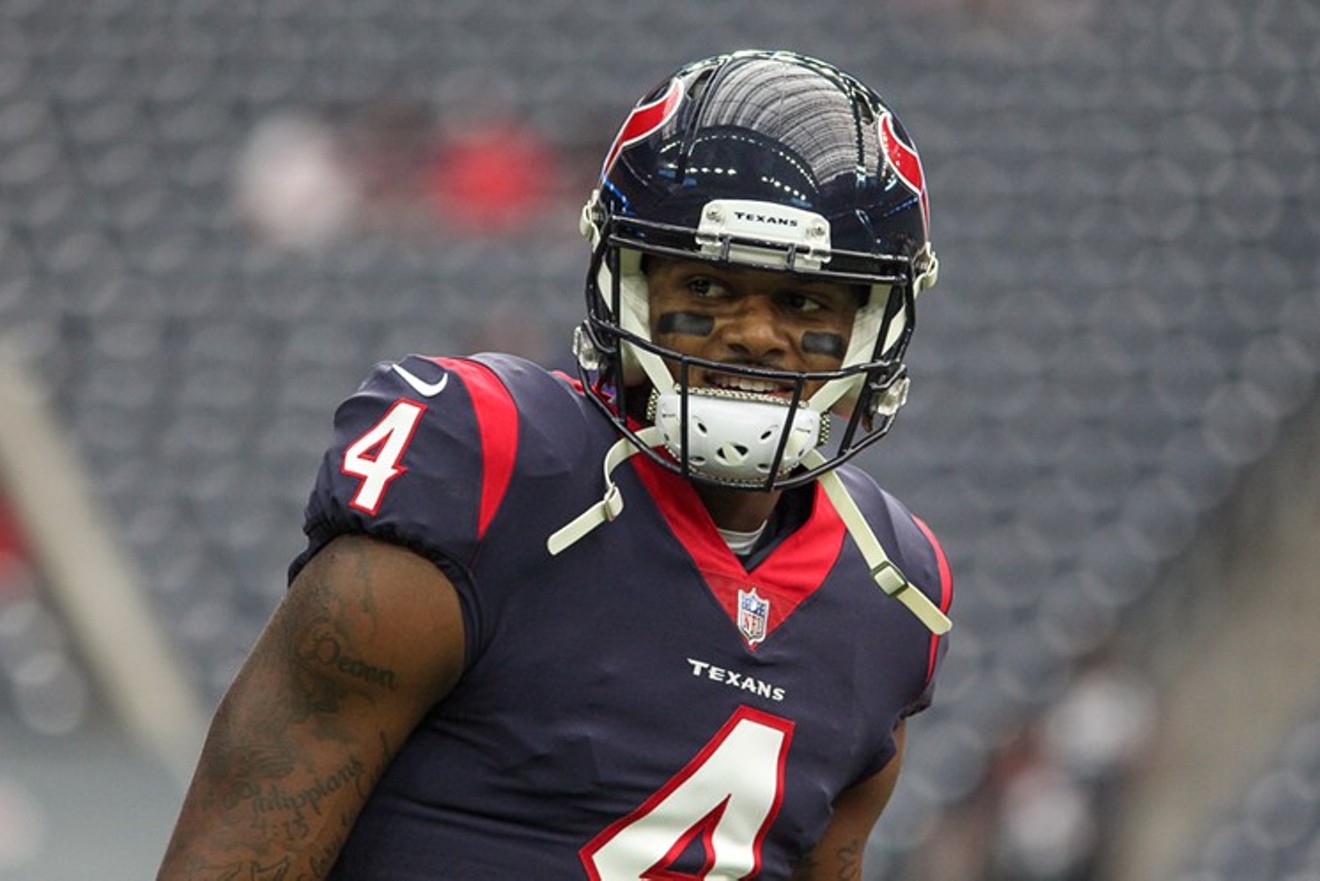 The star of the show? Photo by Eric Sauseda
For people whose lives revolve around the National Football League — yes, I am raising my hand — our long nightmare is finally over. Starting this morning, at NRG Stadium, there will be players in uniforms and helmets trying to win a job in the NFL and/or preparing for the upcoming 2019 season. It's been a couple hundred days since we last saw the Texans in a competitive football game (and I'm using the term "competitive" loosely, since the Colts whacked the Texans 21-7 in the wild card round of the playoffs), so I'm cool with some practices sans pads as an appetizer.

So as the hitting will begin soon enough, here are five burning questions surrounding the Houston Texans as training camp for this pivotal (in the career of Bill O'Brien, at least) 2019 season commences:

What will the power brokers be doing?
As most of Houston knows, the Texans are currently operating without a general manager. The departed Brian Gaine has been replaced with a multi-person combination, led by head coach Bill O'Brien, EVP of Team Development Jack Easterby, and senior VP of football administration Chris Olsen. I would expect Easterby and Chairman/CEO Cal McNair to be at practice every day, so I am intrigued to see what the interactions are like among Easterby, McNair, players, and coaches. Every conversation and every bit of body language will be scrutinized and over-analyzed. Should be fun.

What will the offensive line look like?
For the third straight preseason, the Texans enter training camp with question marks and sources of pain along the offensive line. The problem with that is this is the third straight preseason that they enter training camp with Deshaun Watson at quarterback.Watson was sacked 62 times last year, so the Texans' response to that was to draft two tackles and bring in oft-injured vet Matt Kalil. At some point, they either need the right bodies to fix this thing, or offensive line coach Mike Devlin needs to develop these guys. I'm done saying "the offensive line will get better because it can't get worse," because that's what I said before the 2018 season, and it there was no improvement between 2017 and 2018.

How big a topic will Jadeveon Clowney's absence be?
Presumably, on Thursday after practice, BIll O'Brien is going to meet with the media, and within two questions, tops, he will be asked about Jadeveon Clowney, who is holding out while under the franchise tag. To be clear, Clowney is not under contract right now. Until he signs his franchise tender for one year at a guaranteed $15.9 million, he can sit at home and incur no fines nor any punishment. In Clowney's absence, expect Whitney Mercilus to get some much desired reps at his familiar outside linebacker spot, which is great news for a guy going into the final year of his deal.

How soon until we see J.J. Watt and DeAndre Hopkins?
As we covered here earlier this week, Watt and Hopkins will open training camp on the Physically Unable to Perform (PUP) list. As Ian Rapoport of the NFL Network outlined in this video, the two of them should be back sooner rather than later, maybe even by this weekend:

With more teams reporting to camp -- #Bills, #Jaguars, #Titans, #Bears, #Packers, #Vikings, #Giants have their rookies arrive for meetings today -- we find out which players are on the PUP list. And #Texans WR DeAndre Hopkins (ankle) and DE JJ Watt (knee) will have short stays. pic.twitter.com/rpMlNBuKBY


So, thankfully, there doesn't appear to be much to see here. Watt and Hopkins, the two best football players on the team, should be fine.

Will this feel like Deshaun Watson's team?
It sure felt like Watson's team during the regular season, when he led the team to fourth quarter and overtime wins on a seemingly weekly basis. It sure seemed like Watson's team during OTA's and minicamp, when he was conducting his business and interacting with teammates like a ten-year veteran. Now, with the other three players in this team's de facto "Four Horsemen" out either because of the PUP list (Watt, Hopkins) or holdout (Clowney), Watson is the star of the show when things kick off today. Get used to it.