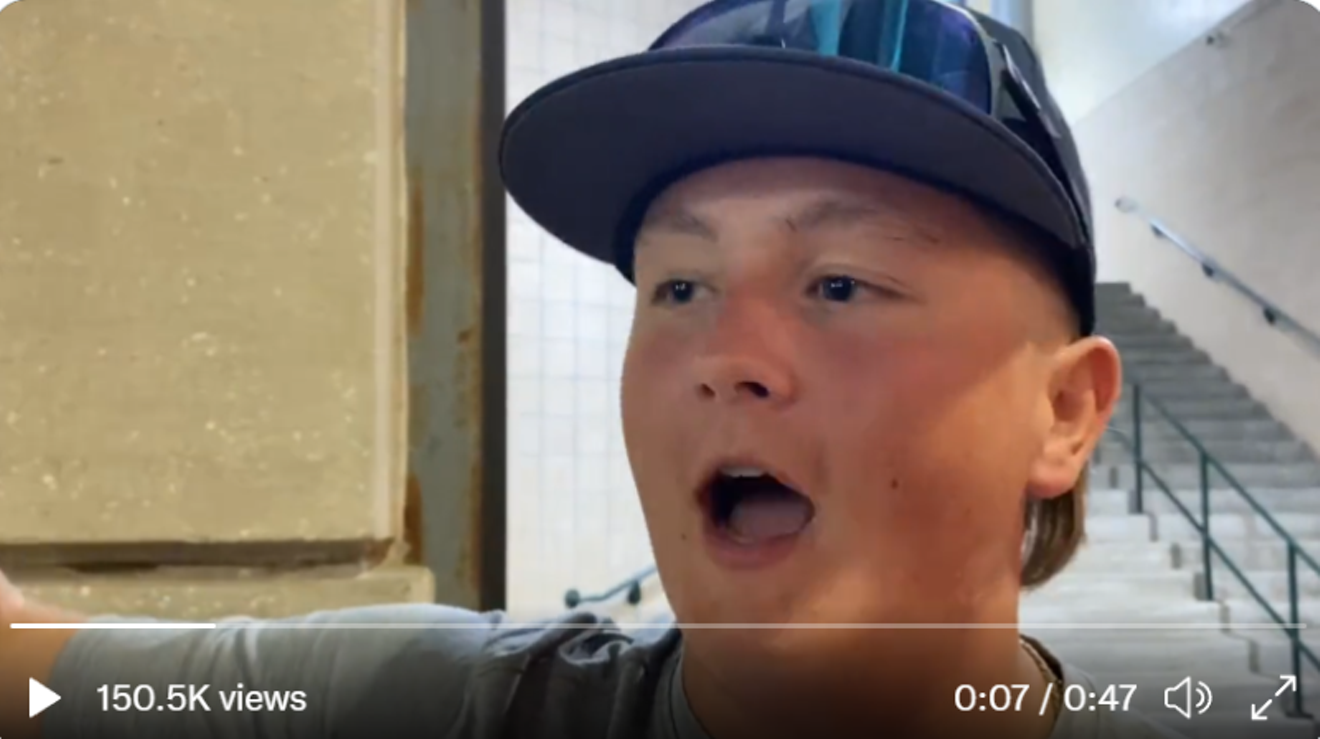 A big catch followed by some savvy horse trading. Screenshot
The Houston Astros had an off day on Monday, so throughout the day yesterday and into Tuesday morning, the Astros' ecosystem was still buzzing about one thing from Sunday night. No, it wasn't the Astros winning the game against the White Sox to take the three game series. No, it wasn't the news that Yordan Alvarez's hand injury isn't nearly as bad as initially feared.

YES, the big news was still Corpus Christi high school student and baseball player, Ryland Freeman, and his massive haul that he received from the Astros in exchange for the ball hit by Astros DH J.J. Matijevic on Matijevic's first career home run on Sunday night. Freeman caught the ball and promptly became a television sensation on the ESPN broadcast.

In case you missed it, here was the home run:

Here was the summary, on television, of the deal that Freeman negotiated for the ball:


According to ESPN Ryland Freeman caught JJ Matijevic’s home run ball and the @astros traded him a bunch of stuff for the baseball. It was JJ’s first Major League hit. pic.twitter.com/ojwmmKOgZW

And also, let's add in that Freeman's initial request included an autographed Justin Verlander jersey, a request the team denied. Well, social media and the spread of info, even into an MLB dugout, being what it is, Verlander quickly found out about the snubbed request, and went ahead and autographed a jersey for the youngster:


16-year-old Rylan Freeman of Corpus got a signed Justin Verlander jersey for coming up with J.J. Matijevic’s first career homer. Verlander signed it “Nice catch.” Freeman, a pitcher on a high school team that won the 3A state title this month, idolizes Verlander. pic.twitter.com/9Eq1zcjXmu

More from 16-year-old Rylan Freeman of Corpus Christi on getting a signed Justin Verlander jersey for coming up with J.J. Matijevic’s first career homer.

“I flipped out,” he said pic.twitter.com/wm9QLuu7tv

All in all, a pretty good night for Freeman, especially when you consider that he will probably receive at least three or four more pieces of memorabilia when he visits Minute Maid Park to cash in his six-ticket prize later this summer. Honestly, on the broadcast, it reached a point where I was half expecting Karl Ravech to tell us that Freeman had just pilfered another first round pick from the Browns for Deshaun Watson. The kid was that shrewd!

It does beg the question "What are some creative requests that you might make, if the Astros came out to your seat to try to make a deal with you for a home run ball that you caught?" I had a few ideas:

Three future appearances from Orbit at a party of my choosing
This is probably a little specific, likely only appealing greatly to an Astro fan with young children, but I can tell you that when my three kids were, say, ages 4, 4, and 3 — yes, I had three kids within 16 months of each other — then the ability to bring in Orbit for each of their birthday parties would make me Father of the Year. Beyond that, it might be kind of funny, if you don't have kids, to bring Orbit along on a bachelor party or a day trip to the Golden Nugget in Lake Charles. It would certainly make for some excellent viral video.

Appearing in one H-E-B commercial of my choice
With the Texans' star power all ether willingly leaving town (J.J. Watt) or being shipped out of town (DeAndre Hopkins, Deshaun Watson, hell even Justin Reid) over the last couple years, we are left with the Astros having essentially an exclusive on H-E-B commercials. So why not tell the Astros to get the good folks from H-E-B on the horn and get you a spot in the next great H-E-B ad? That would far exceed any bit of memorabilia, especially since, who knows, maybe it jump starts a burgeoning acting career!
Bottomless concessions stand gift card for one season
Astros tickets are not cheap. We all know this. But the silent killer at Minute Maid Park is the cost of food and drink. At 10 dollars for a hot dog, 6 dollars for a soft pretzel, and 13 dollars for a can of domestic beer, it adds up quickly. So why not get super practical with your request, and have Jim Crane and company pay for your vittles and liquid refreshment for a full season? It might even make me more likely to purchase more of the non-silent killer — game tickets! Win-win!

Diamond Club parking access for one season
You know what else is a silent, super expensive killer? Parking! So how about requesting, not just FREE parking, but the best possible parking that you can find anywhere near Minute Maid Park — the Diamond Club parking lot, which sits right next to the stadium, about 50 feet from the entrance to the stadium. Not only will you save a ton of money, but you feel like a total baller getting out of your car as fans walk by you on their way in. You guaranteed a lot of "Who is THAT guy, and why is such a baller?" looks from the ham and eggers walking in from Lots B and C.