How the "Lastros" Got the Last Laugh at Baseball's Biggest Game 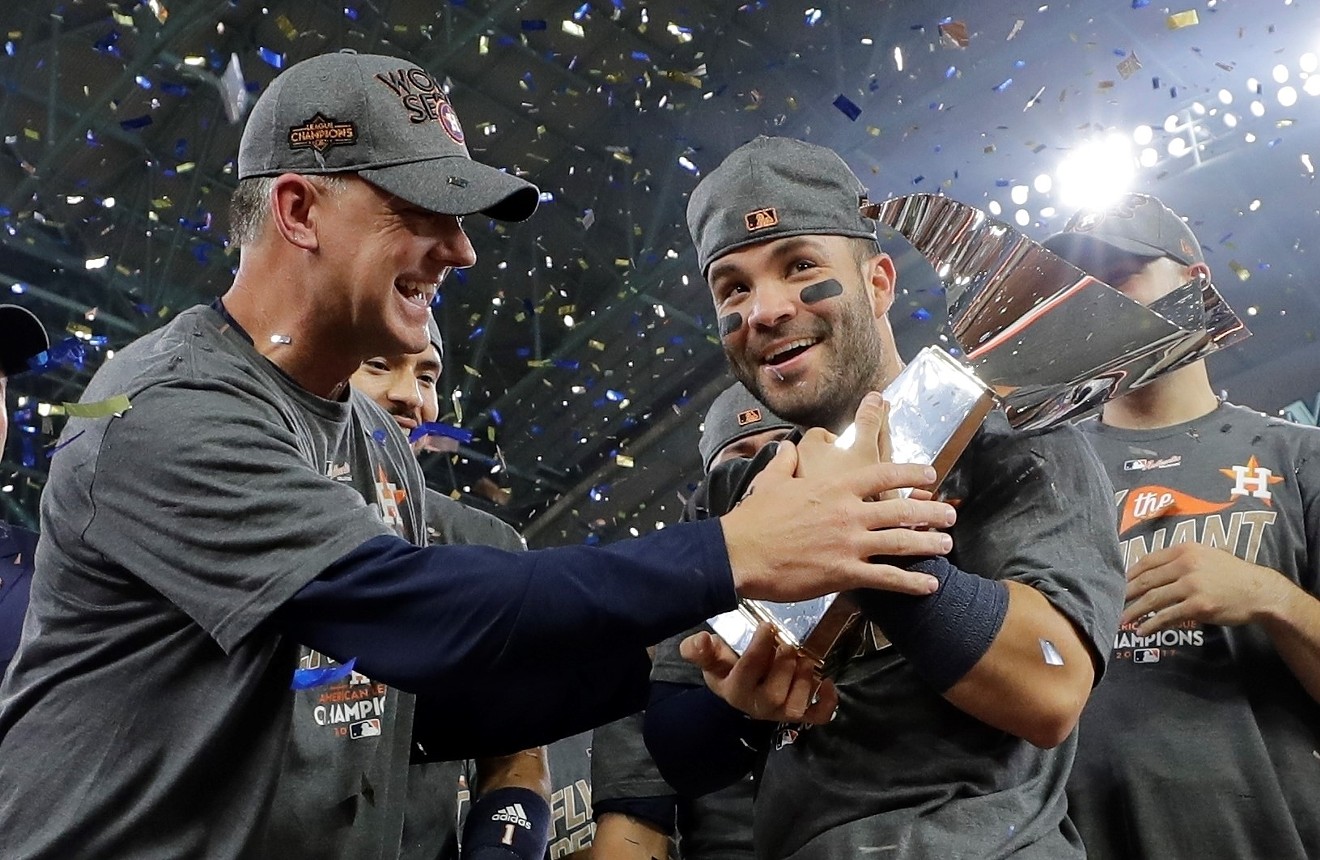 Astros second baseman Jose Altuve hugs the American League Championship trophy with manager A.J. Hinch after they won the pennant over the New York Yankees. Photo by the Associated Press/Courtesy of Triumph Books
Liftoff! The Tank, The Storm, and the Astros’ Improbable Ascent to Baseball Immortality
By Brian T. Smith
256 pp.
$25.95
Triumph Books

The tale of the Houston Astros storybook 2017 season that culminated in a World Series win seems like it came from…well…a storybook.

After all, it hadn’t been that long since the much-derided “Lastros” chalked up three consecutive 100-losing game seasons in 2011-2013. At the same time, club management were in what could charitably be called a “rebuilding” phase for the team.

Book cover
But there they all were on the evening of November 1 on the field at Dodger Stadium after Game 7, hoisting the Commissioner’s Trophy and celebrating. Players like Carlos Correa, Jose Altuve, Alex Bregman, Justin Verlander, Dallas Keuchel, and Series MVP George Springer; coach A.J. Hinch; owner Jim Crane; president of business operations Reid Ryan; and GM Jeff Luhnow, who many credited with building this winning team with a combination of patience, statistics, trades, and drafts.

Interestingly, Liftoff! is the second recent book on the team’s championship season by a Houston Chronicle columnist. But while the narrative of Joe Holley’s Hurricane Season intertwines the Astros’ season of victory with the city’s devastation and recovery from Hurricane Harvey, sports columnist Smith sticks to the baseball.

Early chapters are particularly insightful as Smith summarizes how the Astros got to 2017 after some difficult years and a number of personnel changes. Taking the reader through the 2017 season, playoffs, and championship series, he expertly evolves the story with then-contemporary quotes from players and managers along with his own sharp observations. And stats. Lots of stats.

Throughout, Smith sprinkles in plenty of anecdotes, which serve to humanize the team. Like how the locker room “Club Astros” evolved from some simple pre- or post-game pump up music to a virtual nightclub featuring lights, fog machines, and bass heavy sound systems pouring out bass-heavy rap and EDM. Or how Carlos Beltran, worried sick about his family in Puerto Rico after the devastation of Hurricane Maria, is stunned when owner Crane sends his 100-seat plane to the island to pick up any relatives or friends to bring to America, including Beltran’s parents.

And while Smith does seem to rush the narrative and game reportage when the book gets to the World Series itself, Liftoff! is a concise and timely look at the improbable story of how the “Lastros” had the last laugh not too long ago.
KEEP THE HOUSTON PRESS FREE... Since we started the Houston Press, it has been defined as the free, independent voice of Houston, and we'd like to keep it that way. With local media under siege, it's more important than ever for us to rally support behind funding our local journalism. You can help by participating in our "I Support" program, allowing us to keep offering readers access to our incisive coverage of local news, food and culture with no paywalls.
Make a one-time donation today for as little as $1.