Opinion: The Time-Tested Practice of Using Transphobia to Seize Power 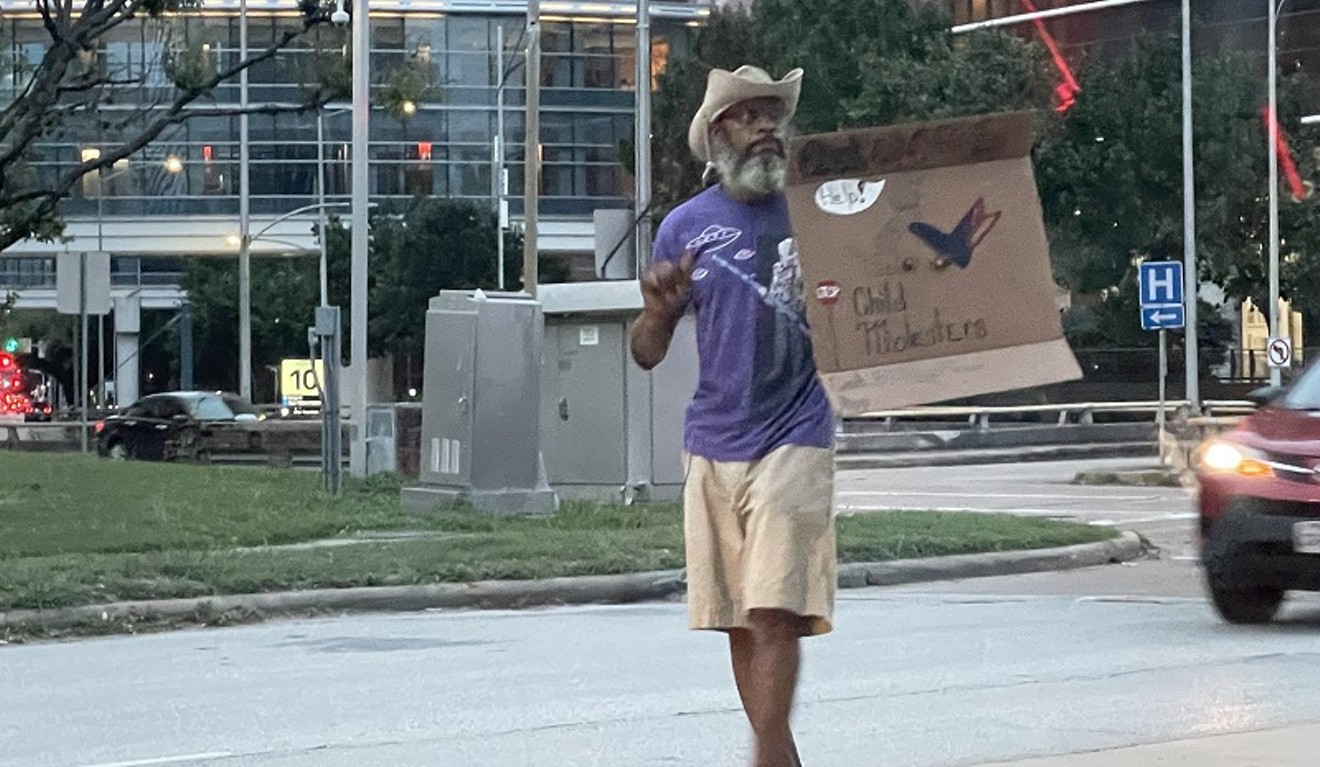 A QAnon supporter on Holcombe. Photo by Jef Rouner
When Joe Biden was finally certified as president earlier this year, I literally began shaking with relief. However, the American Experiment is actually in more danger now than it’s ever been and avoiding a total fascist collapse will require monumental resources of resolve and action. It will also mean looking to the recent attack on trans rights as proof that doom is imminent.

Former President Donald Trump took Godwin’s Law behind the supply shed and had it shot nearly as soon as he assumed office. Whether you want to directly compare him to Adolf Hitler is largely a matter of personal taste, but more and more experts on fascism have come to agree that the political movement launched by Trump falls under that category. As Trump is still the titular head of the Republican Party and few prominent members of it contest his position, that makes the overall conservative sphere at least fascist-adjacent.

So, let’s have a historical look at when things in fascist Germany went to scheisse. In January of 1933, Hitler was appointed chancellor of the country by President Paul von Hindenburg. Von Hindenburg was an old man in poor health by then, but he had won a second term backed by centrists and liberals specifically because he was seen as the once chance to stop Hitler’s rise to power. The Nazis never won a majority of votes, but between their populism and the splintered resistance to German fascism, they were able to pressure Hitler’s appointment to chancellor.

The parallels for 2021 are clear. Biden is far further left than Von Hindenburg, but he is still seen mostly as a centrist Trumpsbane. There is less than zero chance that Biden would appoint Trump to a cabinet position or anything else that would put Trump in the line of succession, but his party is toying with the idea of making him Speaker of the House should they win control back of the lower chamber next year. Trump lurks in the wings, beaten but not gone.

Two fires helped change Hitler from underling to Fuhrer. The first was the Reichstag Fire in early 1933, where a young Dutch communist confessed to arson of the house of parliament. Hitler used the incident to convince Von Hindenburg that there needed to be emergency law and order powers to combat the leftist scourge, and those were granted.

The Nazis used those powers to justify the second fire that May, the attack on the Institut für Sexualwissenschaft (Institute of Sexology). Founded by Magnus Hirschfeld, who was both gay and Jewish, the institute specialized in the scientific exploration of LGBT identities and especially the rising transgender population. All the famous images of Nazi book burnings come from the assault on the institute where tens of thousands of medical records and images were torched in the streets. Joseph Goebbels gave a speech at the burning, calling the authors of the works “intellectual filth.” The loss of the medical knowledge in that fire set the advancement of trans people worldwide back decades.

It’s important to pause here and contextualize what happened at the Hirschfeld fire. LGBT people were not the first targets of Nazi aggression. Fascists had been fighting communists in the streets for years by then. Nazis, including Goebbels in his speech, specifically linked the research down at the institute to the Jews, their favorite target.

However, the attack on the institute was one of the earliest attempts to use state authority to rid the Reich of “filth.” German fascism was obsessed with the ideas that the country was full of elements that made it impure, and that the resulting weakness was what had cost the country victory in World War I. Specifically, these groups were considered to be intentionally undermining the German identity, rotting it from the inside.

Hypermasculinity and women as brood mares for the state were intrinsically part of the Nazi message. There was no room in that for queer people and certainly none for gender non-conforming ones. “Female impersonators” were frequently rounded up and sent to camps.

Why? Because they were also easy to pick on. The Weimar Republic was a fantastically progressive place, and the blossoming acceptance of trans people was damn near revolutionary and even a pop culture phenomenon. However, it was no utopia, and all that acceptance actually made it easier for the Nazis to round people up starting in 1933. Many of the names came from Hirschfeld’s office records, where hundreds had sought help with gender affirming treatment and surgeries. The German public was not united in trans acceptance. As Matthew H. Birkhold puts it in Paris Review, “trans people were seen as especially dangerous, capable of corrupting youth and devastating birth rates.”

Back in 2021, fighting trans people is definitely a top five priority for the Republican Party. In this year alone, Texas State Sen. Charles Perry (R-Lubbock) tried to pass a bill that would criminalize gender-affirming care for trans youths despite it being universally agreed on by medical authorities that this is the best way to prevent suicide in that population. Another favorite of the Texas legislature and Governor Greg Abbott is an obnoxious bill to prevent trans youth from participating in sports under anything other than the gender assigned at birth. That bill is apparently so important that it’s been added to yet another special session of the 87th Texas Legislature.

Transphobia has been standard issue Republican tactic for years now, particularly when it comes to framing “the left” as deviants and child molesters. Fights over the rights of trans people to use the appropriate bathroom are often couched in terms of danger for young girls from trans assaulters despite there being no evidence that this ever happens. Lately, the conspiracy theory is that young girls are being targeted by sinister transgender media influencers to abandon “traditional” femininity as a kind of mass hysteria, a load of nonsense pushed by people like author Abigail Shrier and podcaster Heather Heying. This is often conflated with typical fascist fears over declining birth rates.

And of course, transphobia is rampant in the QAnon community. YouTubers like Blair White and posters on sites like greatawakening.win regularly use trans people as proof for their Satanic cabal conspiracies. Of all the groups in the crosshairs of American fascism, trans people are close to the center just based on sheer volume and number of legal attempts to persecute them.

It is imperative that we not allow that to happen. We cannot be like the moderate and conservative Germans of the early 1930s and stand idly by while trans people are oppressed, hoping that the fascism will stop there because it never, ever does. The complete takeover by the Nazis in Germany could not have been accomplished without liberals and centrists willing to appease the fascist minority, and Trumpism requires the same dark bargain.

I’ve talked with otherwise equality-minded individuals who nonetheless have “concerns” about the increased prominence of trans people. They speak about unfairness in sports, the eradication of womanhood as a unique biological identity, the loss of pregnancy as the realm of the female, and other vaporous, unscientific bigotries. There’s a seed in the hearts of these liberals and leftists where they would clearly be down with some subjugation of trans people.

That willingness to compromise on essential rights is like a crack that fascists can pour water into and wait for a freeze to expand. It allows them moments to seem reasonable and bipartisan, and while everyone is congratulating themselves on how they worked together, the rights of whole groups of people get stripped. The next step, too, will seem reasonable. And the next. And the next.

Demonizing trans people as subversive predators gave the Nazis the chance to test run what it would be like to burn books in the streets, and it went swimmingly. Doing the same for trans people in America lets Republicans see how comfortable we’d be with marginalizing groups in new ways. We cannot become cool with that. It is a moral necessity that we confront our own prejudices about trans people openly and honestly, leaving the bigotries programmed into us since birth at the door.

We should do that because it’s the right thing to do, but also because fascism will happily use our reticence to fight for trans people to acclimate us to not fighting for dissidents, ethnic minorities, and women. We are standing in the streets, Hirschfeld’s books piled in front of us. Are we going to let them strike the match?

The 2022 midterms are looming, including all the top statewide offices for Texas. These elections are almost universally a backlash against the President of the United States’ party in a sort of “well, we can’t let them go too far” mindset. That attitude can easily be harnessed to push a fascist backlash into power just years after its supposed defeat, and shared transphobia is likely to be a potent catalyst, just as it was to push the Nazis into the power that would darken the world. The very fate of the nation may well hinge on whether America can accept trans people as full human beings deserving of rights and respect. If we let them fall, there is no telling who will go next.
KEEP THE HOUSTON PRESS FREE... Since we started the Houston Press, it has been defined as the free, independent voice of Houston, and we'd like to keep it that way. With local media under siege, it's more important than ever for us to rally support behind funding our local journalism. You can help by participating in our "I Support" program, allowing us to keep offering readers access to our incisive coverage of local news, food and culture with no paywalls.
Make a one-time donation today for as little as $1.