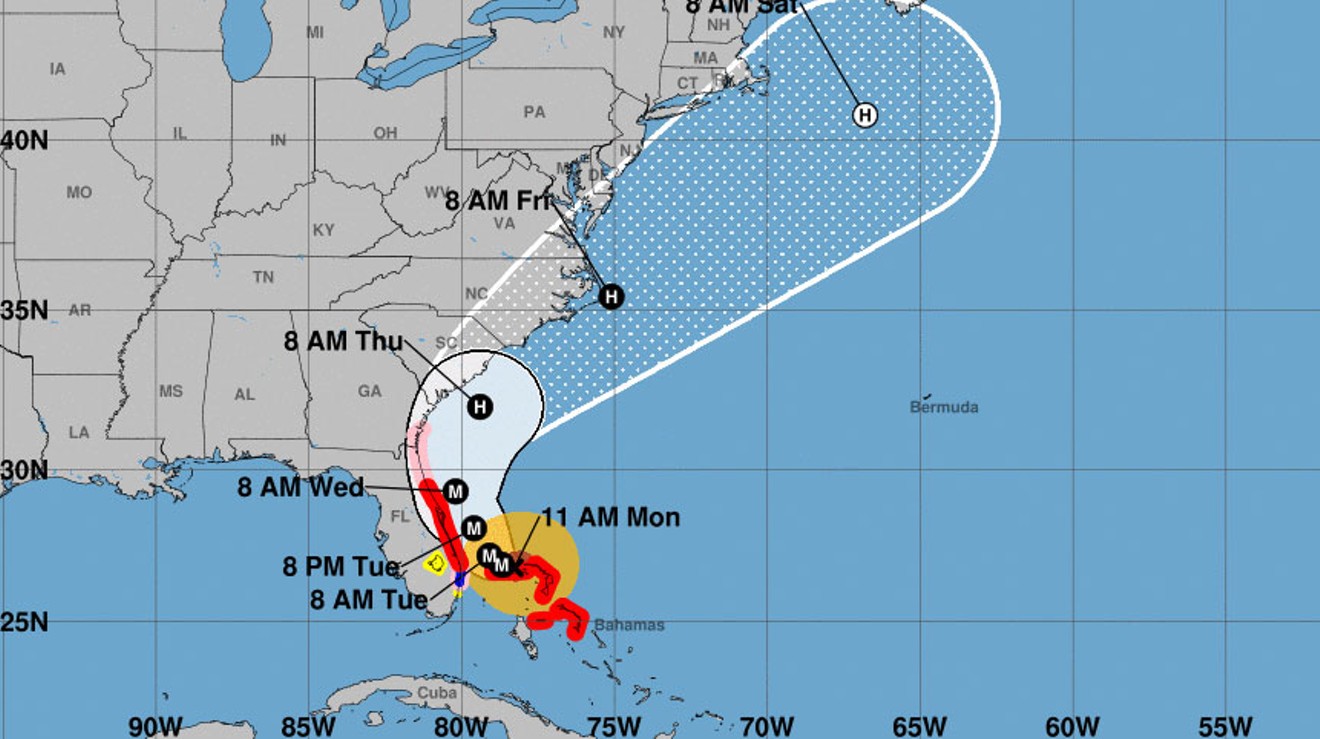 Major Hurricane Dorian is forecast to just scrape the Florida coastline in a very close call. National Hurricane Center
Hurricane Dorian has spent the last 36 hours devastating the northern Bahaman islands with winds in excess of 180 mph and gusts more than 200 mph. Its slow pace across these islands will likely reveal massive flooding and terrible damage from excessive winds over hours and hours of time.

For the U.S. coastline, after days of speculation and worry, there is a glimmer of hope. Thanks to a trough of low pressure digging down out of the midwest and eroding high pressure over the Atlantic, forecast models are in good agreement that Dorian will begin a northward and, ultimately, northeasterly turn just missing a landfall with Florida and possibly the entire eastern seaboard altogether.

To illustrate just how close the storm will pass, forecasts are calling for the eye to be just about 60 miles off the Florida coastline as it moves north. For Houstonians, that's about the distance between Houston and Galveston. While this should produce extremely high tides and storm surge along coastal communities, the amount of rainfall will be greatly lessened (Florida should remain on the dry side of the storm) and the worst winds should remain offshore.

"Should" is the operative word here. Just a wobble to the east and Dorian could make landfall instead of staying out to sea. Floridians aren't out of the woods yet. And areas along the Outer Banks of the Carolinas should additionally get a very close brush if not a direct hit as well.

It is also likely that Dorian is undergoing an eyewall replacement cycle and is moving through cooler water that it has pulled up while moving so slowly. The combination of those factors is serving to weaken the hurricane a bit. It is still expected to be a major hurricane as it skirts the Florida coastline, but not the intense category five storm we've seen over the weekend.

Dorian will continue to move relatively slowly and probably won't clear the U.S. coastline until the end of the week, so we still have a ways to go here. But, it appears a worst-case-scenario may be averted for Florida for now.
KEEP THE HOUSTON PRESS FREE... Since we started the Houston Press, it has been defined as the free, independent voice of Houston, and we'd like to keep it that way. With local media under siege, it's more important than ever for us to rally support behind funding our local journalism. You can help by participating in our "I Support" program, allowing us to keep offering readers access to our incisive coverage of local news, food and culture with no paywalls.
Make a one-time donation today for as little as $1.