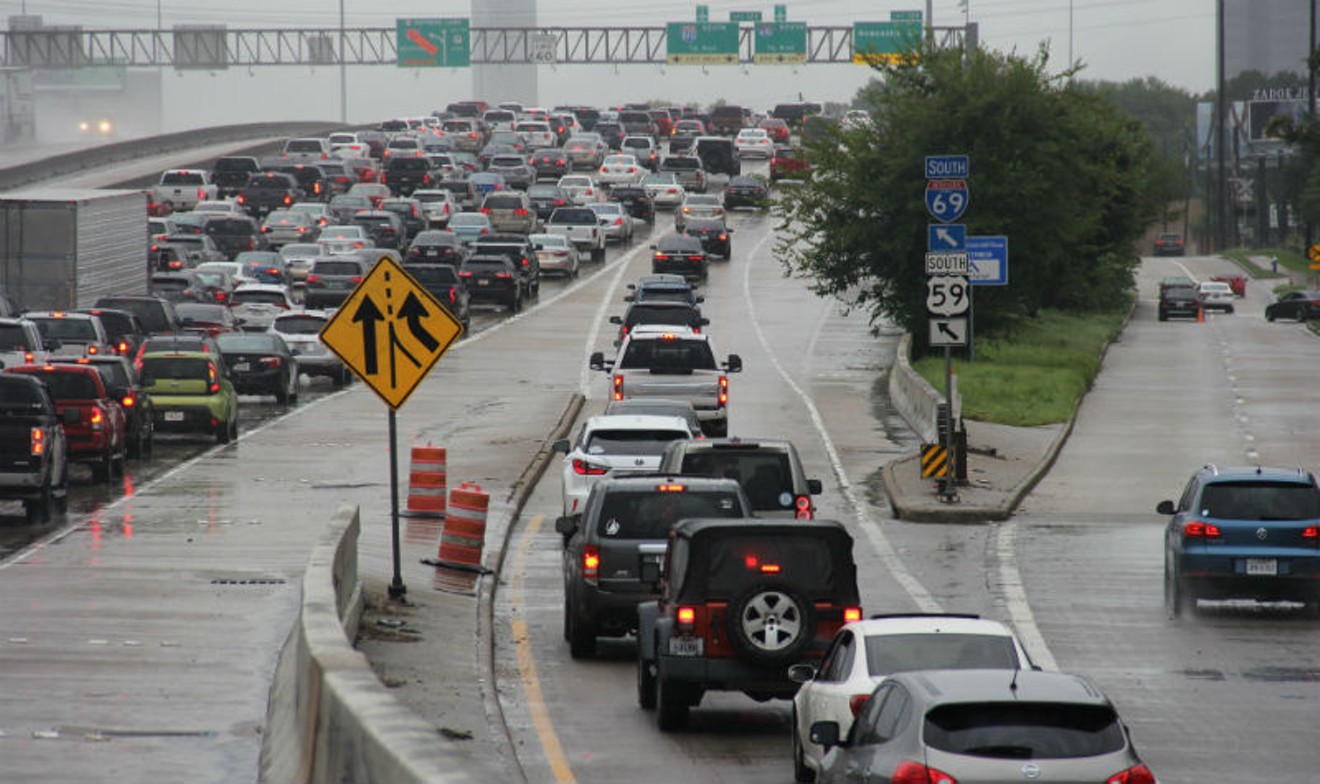 The meeting of 59 and 610 was not a good place to be Thursday. Photo by Doogie Roux
Tropical Storm Imelda inundated the city of Houston and surrounding parts of southeast Texas this week with some areas receiving 20, 30, even 40 inches of rain over a 48-hour period. Places like Winnie and New Caney saw flooding on par with or higher than rates during Hurricane Harvey. That now gives our area four major floods in five years and, for many, it came as somewhat of a surprise.

Now that we have moved past the rainfall and have begun to dry out, we can assess not only the damage, but what this storm has taught us about the weather in Houston.

Rainfall rates and duration are as important as rainfall totals.

Most places can handle an hour or two of rain falling at 1 to 2 inches per hour with few problems. But there were parts of Houston that saw several straight hours with 6 to 7 inches falling per hour. When you do the math, it is easy to see how certain areas can wind up with 15 or 20 inches of rain.

While these types of rainfall rates are abnormal, particularly over long stretches of time, during normal Texas thunderstorms, it isn't all that surprising for a tropical system like Imelda.

A tip-toe approach back into the fray.
Photo by Doogie Roux

How bad it was depends on where you were.

Houston is over 600 square miles. The entire region is more than twice that. In some cases, a distance of just 20 or 30 miles was the difference between modest rainfall and flooding conditions. If you live in Katy, you may have wondered what all the fuss was about. This is the reality of life in Houston and it is partly why these storms can be so difficult to predict (more on that in a second).

Unlike Hurricane Harvey, Imelda's impacts were not felt to the same degree simply because the effects were not nearly as widespread. But, that is cold comfort for people who lived in the hardest hit areas and a reminder that being prepared during hurricane season is critical for all of southeast Texas.

A few days out, forecasters began to become concerned about the possibility of very heavy rainfall in and around the Houston area. Some even posted forecast models on social media showing rainfall totals of 20-plus inches across central Harris County.

But, just two days before Tropical Storm Imelda made landfall, the National Weather Service wasn't even sure it would reach tropical storm status. While forecast tracking has gotten very, very good, storm intensity and precipitation modeling still has a ways to go. It's particularly difficult when it comes to trying to pinpoint where rain might fall. It's why it is best to be prepared regardless of the forecast.

Bayous rose all over the area. This one's at Scott and North MacGregor.
Photo by Doogie Roux
Don't sleep on the tropics during hurricane season.

During news casts, we heard many people say, "We didn't even hear about this storm." That may be because it happened relatively quickly. Only people really following the weather may have heard that there was a "blob" of tropical weather heading our way that could give us increased rain chances the middle of the week. It wasn't until early this week that the potential for flooding began to emerge and it wasn't until a few hours before landfall that Imelda was even classified as a tropical depression.

This, and an extremely active Atlantic Basic, comes on the heels of what felt to many was a relatively quiet hurricane season overall with the notable exception of Hurricane Dorian. The lesson here is do not let your guard down when it comes to tropical weather in Texas until at least October, and pay attention to weather forecasts all summer long.

The waters on South Rice between Hidalgo and West Alabama
Photo by Elizabeth Benavides
KEEP THE HOUSTON PRESS FREE... Since we started the Houston Press, it has been defined as the free, independent voice of Houston, and we'd like to keep it that way. With local media under siege, it's more important than ever for us to rally support behind funding our local journalism. You can help by participating in our "I Support" program, allowing us to keep offering readers access to our incisive coverage of local news, food and culture with no paywalls.
Make a one-time donation today for as little as $1.