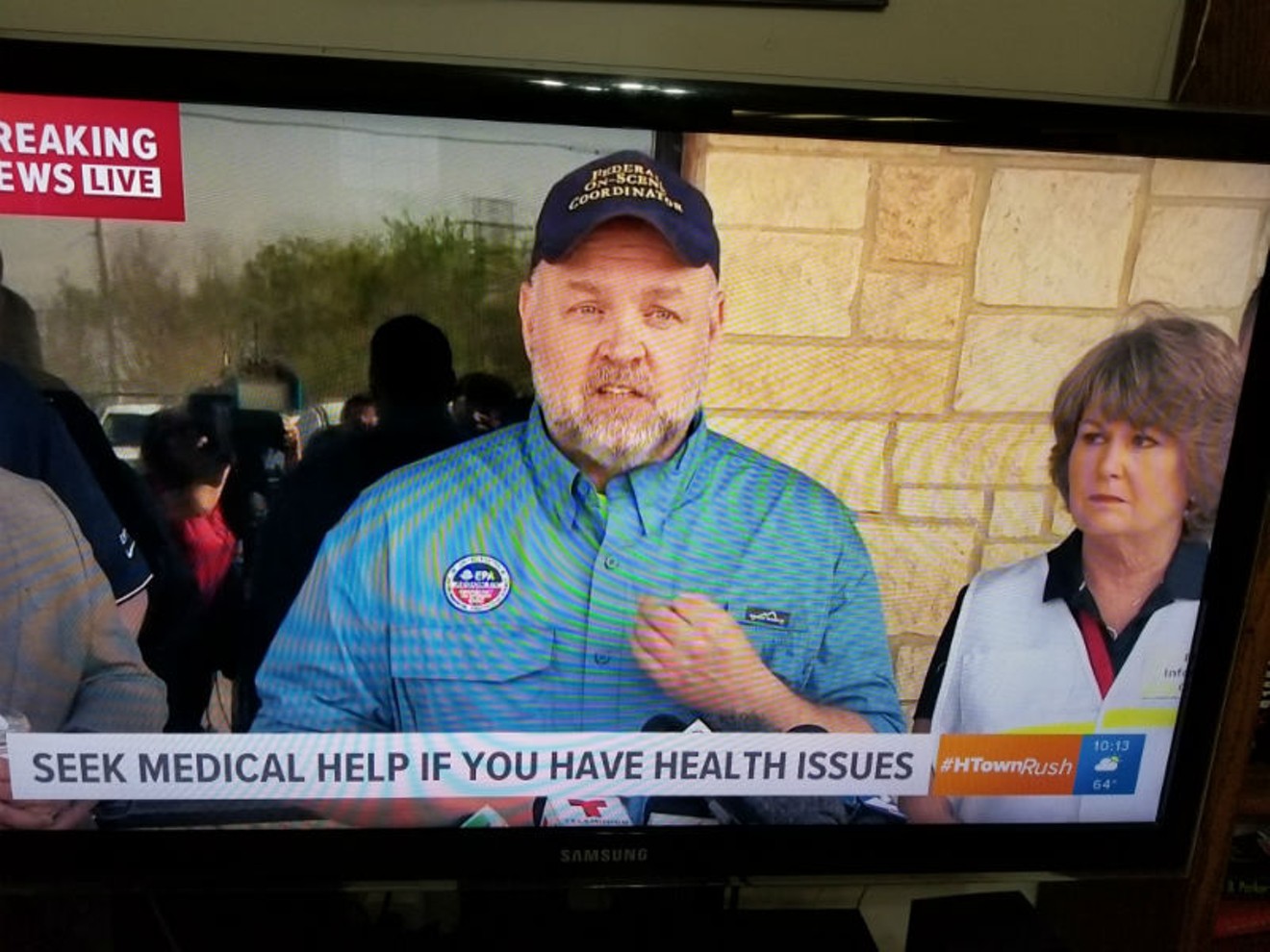 Next up: Finish emptying that tank. Screen shot from Channel 11 News
Update 4:50 p.m. Houston ISD has just released this statement: "With reports of the Deer Park industrial fire re-igniting this afternoon, all on-campus activities for east area HISD campuses this weekend have been cancelled. Also, sporting events have been rescheduled at alternate locations."

Update 4:30 p.m. Friday: ITC has just reported that tanks on the west side of the containment area have re-ignited.

Update 2:50 p.m. Friday: Workers were at the ITC site still trying to determine exactly how much and what chemicals had been released in the partial breech, according to a representative at the ITC media center.

Specifically, the U.S. Coast Guard has closed the ship channel from Tucker Bayou to Crystal Bay and while ITC cannot issue a shelter-in-place order it was recommending that the neighborhood including the San Jacinto monument and the Battleship Texas consider doing so.

The partial breach occurred at the tank farm's secondary containment wall on the north side near the now notorious tank 80-7.

"We're taking additional measures in an effort to contain the release," the ITC statement said. "We are coordinating with federal, state and local officials to resolve the issue as soon as possible."

As a result, the office was urging nearby neighbors to shelter in place and because of this, the part of the Houston Ship Channel near Tucker Bayou was closed.

Original story:
ITC will be attempting to remove the last 20,000 gallons  barrels of benzene from one tank on its Deer Park facility — an action that will take an estimated 8-12 hours officials said at a 10 a.m. press conference.

The danger is, of course, that just as happened the other day, the covering foam might be displaced and allow some of the dangerous chemical vapors to escape. Overnight Wednesday this happened at the Intercontinental Terminals plant because of a change in the direction of the wind; this time, it would be because of the disruption in the material caused by the pumping action, officials said.

Despite this, Jerry Mouton, Jr., the mayor of Deer Park said no shelter in place order had been released today. He said they are standing by, however, if one is needed. In response to a question he said that every individual Deer Park resident should do whatever makes him or her feel safest but at no time have city officials felt this fire and subsequent release of chemical vapors required a call for a general evacuation. "There is no scenario that we have even considered evacuating," he said.

Expected results of water analysis in the area were not forthcoming. ITC spokeswoman Alice Richardson said they have been busy with other things, concentrating on air quality.  She said water results would be released later today. "This incident is a huge incident and we're all trying to do a lot of things and our main concern is the health of everyone right now, the air part of it The Coast Guard is here ; they're monitoring the waters with boats in the water. We have booms out. We just not have had time to go to the next step."

Mouton said it usually takes three or more days to get water test results back.

"There's always a possibility of another shelter in place," Mouton said. "We're trying our best to avoid that. I don't want more shelters in place. We're at a high status of preparedness in the city of Deer Park."
KEEP THE HOUSTON PRESS FREE... Since we started the Houston Press, it has been defined as the free, independent voice of Houston, and we'd like to keep it that way. With local media under siege, it's more important than ever for us to rally support behind funding our local journalism. You can help by participating in our "I Support" program, allowing us to keep offering readers access to our incisive coverage of local news, food and culture with no paywalls.
Make a one-time donation today for as little as $1.