There is No Evidence Ivermectin Helped Fight COVID in Peru

Pennsylvania Commonwealth microbiologist Jared Seiders analyzes a PCR run inside the extraction lab at the Pennsylvania Department of Health Bureau of Laboratories on Friday, March 6, 2020. Photo by Governor Tom Wolf via Flickr
The news regarding ivermectin over the last couple of weeks has been mostly about how Americans are taking deworming medication meant for livestock. While many reports of it leading to explosive diarrhea are hoaxes and trolling, what’s not funny is that in Texas poison control calls related to the drug are up nearly 600 percent.

As amusing as it might be to point out the group most likely to refer to others as sheeple is buying an anti-parasite drug meant for farm animals instead of getting vaccinated, it does detract from the larger problem. Many doctors and media personalities are insistent that ivermectin (the one used for humans) has been an outright miracle in other countries. Graphs showing remarkable results are touted, bolstering the idea that the rest of the world is onto something we and our vaccine-centric care plans are missing.

The main problem is that there is no evidence that ivermectin is actually doing anything in other countries.

The main source of these claims from the ivermectin-advocacy group Front Line COVID-19 Critical Care, specifically Dr. Pierre Kory, who testified in front of Congress in December about how ivermectin was shown in studies to be incredibly effective. There are some significant problems with this. One, the Australian study that launched interest in the drug was done on lab cultures using many times the safe amount of the drug that could be put in the human body. Two, a promising trial done in Egypt by Dr. Ahmed Elgazzar of Benha University that formed the backbone of many meta-analyses was later pulled from publication after it was discovered large parts of the study were plagiarized and in error.

Studies have continued to be done, but the majority of the ones that are cited as proof of efficacy are poorly designed and rate high for possible bias in peer review. Trials that are rigorously designed, such as the recent one by McMaster University and conducted in Brazil, show no benefit. Simply put, the fantastic results from the small studies do not replicate in large ones with greater scrutiny and accountability for bias.

This has not stopped the FLCCC from pushing the matter further. The example that I’ve run into most in my hate mail is Peru, so let’s look at that. 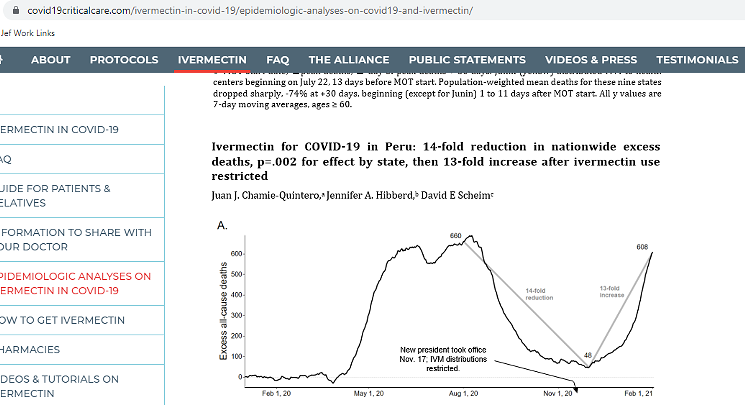 This chart implies things that it does not backup.
Screencap from Covid19CriticalCare.com
On the FLCCC website there is a graph of excess all-causes deaths in Peru starting in February 2020 and ending February 2021. The focus of the graph is on a dip in November 2020 when President Manuel Marino took office from Martin Vizcarra. Put a pin in those names because we’ll come back to them in a second. Shortly after Marino restricted the use of ivermectin, deaths spiked in Peru just about as high as they had been.

Here are some things to understand about the Peru data. First, the death rate has been especially high in Peru due to a number of factors including dense populations and a poor healthcare system. Vaccination has been slow to Peru, and the rest of the global south, partially because of the Bill and Melinda Gates Foundation’s drive to make sure that none of the vaccines become patent-free. This has wildly slowed down the availability of vaccinations to poorer countries thanks to the influence the foundation holds on world health initiatives.

On top of that, former President Vizcarra was involved in scandal where he and his cronies stole vaccines from a Chinese company that were supposed to be used in clinical trials for their own use. This further hampered vaccination efforts due to lost public trust.

Like a lot of countries eager for the vaccines but unable to acquire them, Peru approved ivermectin as a possible treatment. However, even the region’s own health officials made it clear that there was little evidence it would do any good.

“It is a product that does not have scientific validation in the treatment of the coronavirus,” said Marcelo Navajas, health minister of nearby Bolivia, in a press conference on May 12.

Around that time, Peru approved ivermectin. Its supposed impact was not immediately felt. Daily deaths from COVID were 454 on 8 May 2020 when the approval was given, and they would continue to rise throughout the summer. For three months, deaths stayed above 500 per day, and only began dropping below where they started in September. If ivermectin is so amazing, why did it take nearly four months to have any significant impact?

One of the primary fallacies that ivermectin advocates use is assuming that just because ivermectin is approved for treatment by governments then it’s being widely used. In truth, it’s virtually impossible to tell how much ivermectin was actually being taken by Peruvians. A huge black market for the drug sprang up, meaning that solid numbers are hard to come by. We simply do not know how much ivermectin was used, or in what doses, so its efficacy can not be determined just by looking at graphs of deaths. Even if we could, the graphs themselves show that nothing much happened for months.

It is something of a mystery exactly why deaths in Peru plummeted from September 2020 to the end of the year. The first lockdown in the country was over, and a second one would not start until January. It could be that the early oxygen shortages that led to people being turned away at hospitals were resolved and so more patients benefited from care. There's also the possibility the numbers reported are inaccurate, particularly as the Vizcarra government came under fire for bribery allegations that led to the president's impeachment. In such circumstances, it's best to look to the studies on the drug rather than reading the entrails of the reported deaths.

There have been studies in Peru, but they have the same problem many other ivermectin studies have in that they are badly designed and rife with bias. Looking at the studies that have been done, a majority of them rank high for bias based on missing data that skewed the outcomes. Analysis of the results do show vaunted claims like 85 percent reduction in mortality, but the certainty of the evidence is in question because of poor execution.

It's not enough to say "this one patient took ivermectin and got better," or even that a hundred did. A study has to show that the ivermectin was responsible for a better outcome, and most of the ones done so far simply don't meet that threshold. Only more clinical data done with proper controls will show if ivermectin has any benefit, though so far, no such study has.

The giant uptick in deaths in Peru starting in the winter of 2020 has a much more reasonable possible cause than the new government cancelling the use of ivermectin: the Lambda variant. First discovered in the country in August of 2020, the much more contagious variant spread like wildfire in Peru, and by April 2021 it accounted for more than 80 percent of cases reported.

The appearance of this more virulent strain of the virus is not mentioned in the FLCCC data, which instead implies the entirety of the blame belongs on stopping the use of ivermectin. That’s if use even did stop. As noted before, there is a very large black market in Peru.

Nor does the FLCCC seem interested in a much more telling piece of data. In May 2021, average daily deaths from COVID plummeted in Peru without the reintroduction of ivermectin. The country had begun receiving Pfizer-BioNTech in March and April, and as the summer went on the government announced major donations of millions of vaccines. Though Peru still lags behind in terms of vaccinated population, millions have received inoculations now. As such, the daily deaths in the country are now as low as they’ve been since the pandemic began. The evidence that vaccines are responsible for Peru's current low rate of death from COVID is far more impressive than any for ivermectin, and yet that never seems to come up.

It must be stated, again, that only the same level of robust, double-blind, randomized controlled trials that the vaccines have received will prove ivermectin is effective. Merely looking at a graph of deaths and assuming the drug was responsible for a dip without any exploitation of other possible factors is not going to cut it.

The FLCCC continues to preach the ivermectin gospel despite this, and the way they frame their data is often misleading. It’s led people to think that ivermectin has been a miracle in foreign lands when there is simply no proof that this is true. In doing so, it’s set back vaccination efforts in this country as people claim ivermectin is a serviceable alternative.

These claims are why people are taking horse medicine right now, and it’s not nearly as funny as it appears to be.
KEEP THE HOUSTON PRESS FREE... Since we started the Houston Press, it has been defined as the free, independent voice of Houston, and we'd like to keep it that way. With local media under siege, it's more important than ever for us to rally support behind funding our local journalism. You can help by participating in our "I Support" program, allowing us to keep offering readers access to our incisive coverage of local news, food and culture with no paywalls.
Make a one-time donation today for as little as $1.