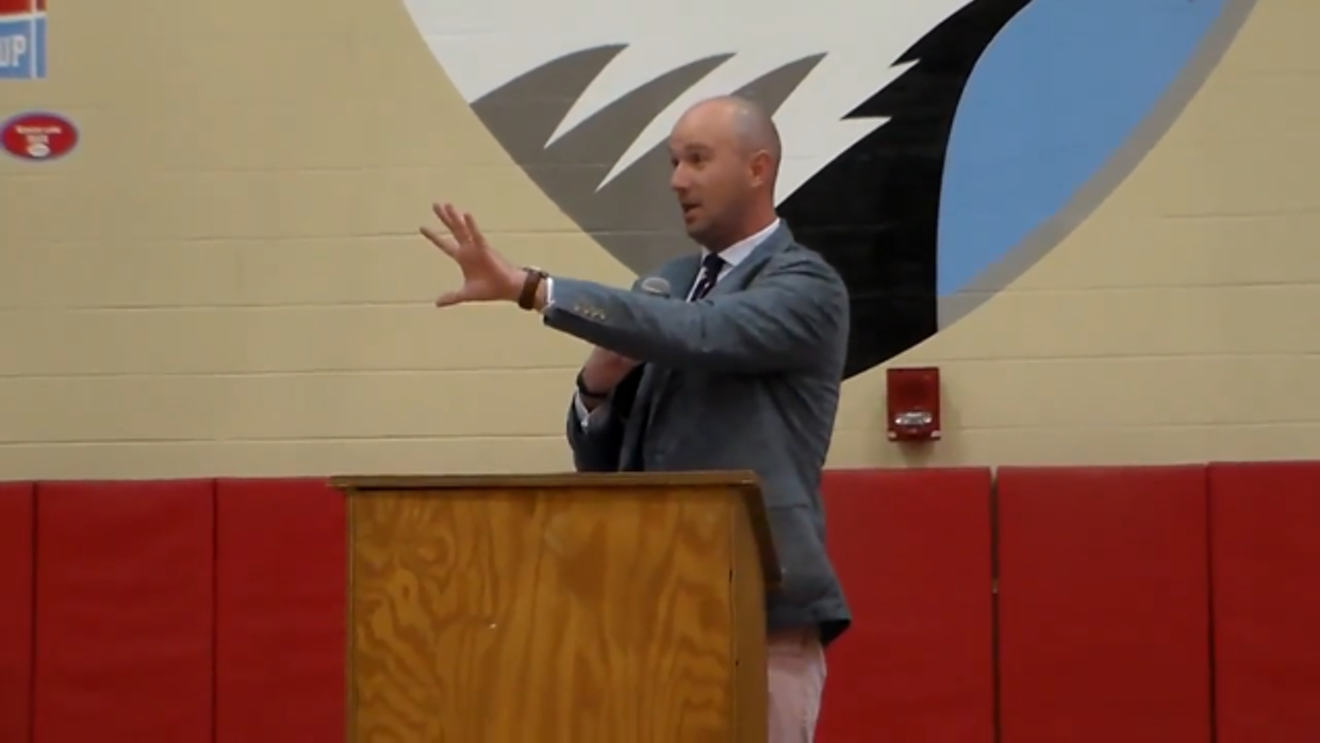 Jack Easterby is running out of allies inside NRG Stadium. Screen grab from YouTube
While actual good football teams prepare for something the Houston Texans have never had the pleasure of preparing for before, a conference title game, the drama from inside NRG Stadium continues to take center stage. Deshaun Watson's anger toward the organization doesn't appear to be going away anytime soon, as the latest news has him ignoring the Texans' phone calls (which makes it awfully difficult to give input on a new head coach):


"Deshaun Watson is not returning calls from the organization. ... The Texans have very little control here."

So, let's go from bad to worse — for the second time in less than two months, Greg Bishop and Jenny Vrentas of SI.com have put out a piece outlining the strife, dysfunction, eye rolling, and general chaos being caused behind the scenes, according to numerous sources, by Texans' EVP of Football Operations (and a former team chaplain in New England), Jack Easterby.

Let's get right into it. Here are the most disturbing items ascertained from the latest exposé on Easterby:

Easterby allegedly lied about wrangling up the list of sources from the first SI.com Easterby piece
Let's start with the worst one first, and the item in the story that SHOULD have the Texans' Human Resources department investigating exactly what is going on here. Here goes:

“According to three sources, Easterby told multiple people inside the building that he had sued, or planned to sue, SI for defamation, and had therefore been provided with a list identifying all sources for that story. That is untrue: SI has not been notified of any lawsuit nor disclosed the identity of any of its sources.

“Multiple people who have worked with Easterby also say that he has told people in both Houston and New England, including the McNairs, that the Kraft family, which owns the Patriots, is behind the negative press about him. Some of these people also say he has spread a story that the Krafts are investors in SI or had directly funded SI’s reporting. That is also untrue: SI has no financial relationship with the Krafts or any of their business ventures, including the Patriots. The Krafts declined SI’s interview requests for that story. Easterby denies telling colleagues that the Kraft family has an ownership stake in SI, and McNair says he does not believe SI is funded by the Kraft family.”


The fact that this alleged list of sources from inside the stadium does not exist makes it pretty easy to connect the dots — it appears as though Easterby was trying to frighten people into, minimally, walking on more eggshells than they already are over there, or possibly get them to fess up about being a source for SI.com's first Easterby piece. Either way, the team needs to investigate and see if one of its highest executives is trying to intimidate employees by lying to them.

Easterby was actually giving the team a rambling pep talk the night before the season finale
As if the Texans weren't already in a bad enough mood heading into the season finale against the Titans, what with them having gone 4-11 coming into that game, but they apparently had to listen to Easterby, a guy who never played or coached a minute of football, give a meandering speech the night before the game:

Easterby delivered a speech that was described in multiple direct accounts as a lengthy missive intended to be rousing. The discourse centered almost entirely on Deshaun Watson, the Texans’ star quarterback at the end of a historically great—if wasted—season. Easterby, those sources said, was effusive in his praise for the quarterback, but to the dismay of many, he did not extend the same attention to: J.J. Watt, the team leader and greatest player in franchise history, who was on the verge of completing only his second healthy season in the past five years; the turmoil that engulfed the organization; the midseason firing of coach Bill O’Brien; or the future of a franchise seeking new leadership.

Easterby, in answering emailed questions from Sports Illustrated via a team spokesperson, described it as a “brief intro speech” and that “afterward, I was thanked by many players and coaches for my words.” But multiple players texted their representatives that night to describe a meandering address unlike any they’d heard. Others, one source said, left the meeting “pissed off,” believing Easterby’s only intention was to curry favor with the quarterback. Watson, if anything, was embarrassed by the show, two sources said.

And we wonder why Deshaun Watson reportedly wants the hell outta here. Yeesh.

It appears Hannah McNair, Cal's wife, may have angrily slipped into the DM's of some passionate fans
This is a story from Week 15 of this past season, in which Ronnie Baker, a Texans fan, and some friends were in Indianapolis for the Texans 27-20 loss to the Colts. At that game, Baker brought in a couple of banners that read “Jack Easterby Chaplain or Charlatan” and “Jack Easterby Is A Snake FIRE HIM.” Security attempted a couple of times to confiscate them, including trying to take them from Baker's friend, Ashley Reidy, who refused to hand them over. From there, the story takes an interesting turn on social media:

Reidy is a Houston native whose father was a season-ticket holder for the Oilers; she has owned Texans season tickets since 2003, the franchise’s second season. And, through a family connection, she’s an acquaintance of Hannah McNair. They followed each other on Instagram.

She suspected Hannah had asked security to confiscate Baker’s banners when he got up, though her theory drew more of an eye roll when she told her husband. But Monday morning, Reidy had a direct message from Hannah’s now-deleted Instagram account: “I saw y’all on Sunday. Do you feel proud of yourself and your new friends? Y’all have zero basis for your charades. Easy to act that way when you know nothing.” And then she saw she had been blocked. (A Texans spokesperson did not respond to questions about Hannah’s Instagram account or any interactions she had with fans through social media.)

If this is all true, it's not a great look, if you're the first lady of football in Houston.

In Mexico, Watson was hoping to process his deep frustration, unhappy with the direction of the franchise that signed him to that nine-figure deal. He had moved quickly past the 2020 offseason trade of his favorite target and close friend, All-Pro wideout DeAndre Hopkins, the same source said. Of course, Hopkins’s departure greatly impacted the Texans’ offense. But Watson still put up MVP-caliber numbers, finishing the year with a career-high 4,823 passing yards and throwing for 33 touchdowns against only seven interceptions. As he and Watt, two of the most respected players in the NFL, walked off the field following the 41–38 Week 17 loss to the Titans, the final indignity in a 4–12 season, Inside the NFL cameras caught a dejected Watt telling the quarterback, “I'm sorry, we wasted one of your years.” Many players, according to the same sources, felt the same way as Watt—and support Watson’s doing what’s best for himself moving forward.

This part of the story was really disturbing because it shows that, basically, if the rest of the guys on the team could pull a power play and possibly get moved out of Houston, they would. Mark my words, if Jack Easterby remains in his role, and Deshaun Watson is traded, you, Texan fans, are rooting for the new wave Cincinnati Bengals. This will be viewed as a joke of an organization going forward.

On Tuesday, Johnson, the lone member of the franchise’s Ring of Honor, posted on Twitter that Watson should stand his ground, writing that “nothing good has happened” since Easterby’s hire. When Watson saw the tweet, the first for a person of Johnson’s significance to name Easterby directly, he laughed. Asked why he might find a tweet that heavy in sentiment funny, one of the people close to Watson says, “He just wants out.” Then Watson watched the Houston Rockets play Tuesday night—when he posed for a photo with Johnson, which Johnson posted to his Instagram page, reiterating the “stand your ground” message from hours earlier. Only this time, Watson was in the frame.


Mentally preparing for life in Houston without Deshaun Watson is not fun.