If so, you may want to check online adoption services run by a San Antonio woman named Jennalee Ryan, who once adopted, and then un-adopted, a boy who turned out to be a little too gay for her household.

Ryan, the subject of a 2007 Houston Press feature about her troubled and vague adoption facilitation/advertising companies, now connects prospective parents with attorneys in California who allegedly specialize in adoption — including a lawyer who is one of her biological sons, whose relationship to Ryan is not disclosed on any of her myriad websites.

So, you ask, what's the problem — or is there even one at all? That's the thing: Adoption advertising laws vary widely among states, and prospective parents should probably educate themselves on their state's laws before spending any money on services that may not be allowed to advertise in the first place. In Texas, for example, only state-licensed agencies can place children, or "provide or obtain a child for adoption."

A layperson might think that posting a picture of an infant under a green, all-caps "AVAILABLE" listing, along with a $28,000 price tag, would qualify as advertising, but Ryan's companies are careful to couch their services in vague terms. They also technically only match prospective parents with attorneys, not directly with the birth mothers, and the sites are full of disclaimers stating they are "not a state licensed adoption agency nor attorney, therefore will not give legal advice nor assist in the placement of a child." (There is also a Spanish-language version of the site.) 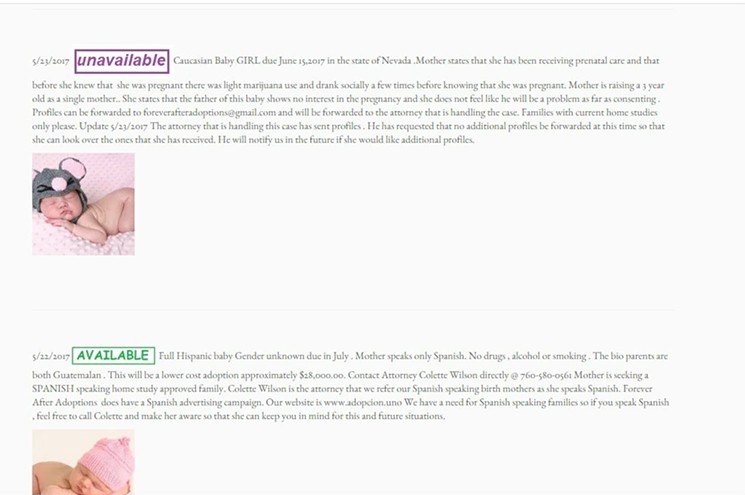 We can't wait until next month's catalog.
Screenshot, Foreverafteradoptions.com
A woman who contacted Ryan for a potential adoption (she asked that her name not be used) told the Press that Ryan said she wasn't a facilitator, and "that she just handles the website and advertising for birth mothers. But if she finds you a match, the match fee is $12,800. And that's the definition of a facilitator — charging a fee to find birth mothers."

The woman said she was referred to San Diego attorney Quincy Braxton, without being told that Braxton — who was admitted to the California bar in December 2016 — was Ryan's son. (Braxton did not respond to requests for comment.)

She says she was told that she was going to be matched with a birth mother in Tennessee. On top of the $12,800 match fee, there was a $4,000 "referral fee" for Braxton.

The woman said in an email that:


"There were two separate times when we were supposed to have a scheduled conference call with the birth mother, 'Bethany,' and Quincy. Both times the call was going to have to be 'rescheduled.' I asked Quincy for the redacted forms the birth mother had filled out upon intake, and for proof of pregnancy. He said he would email them but never did."


We left messages for Ryan via email and with a woman who answered the phone at Forever Ever After Adoptions. Subsequent calls to that company were automatically forwarded to voicemail for a different phone number.

Ryan built a successful adoption referral business — the first incarnation of A Silver Spoon Adoption — in California in the late '90s, but it shuttered after she filed for bankruptcy in 2000. She moved to San Antonio in 2005 and launched The Abraham Center of Life, a company that she called "the world's first human embryo bank." The center's goal was to facilitate the creation and sale of frozen embryos, but it never got off the ground.

She had five biological children and adopted three more over the years, but ultimately placed two of those with other parents. As we wrote in 2007:

"While she had adopted two boys and a girl (all as infants) over the years, she later gave up the girl and one boy. By the time that boy, who we'll call Max, was four, Ryan decided he was gay. She loved Max, but told the Press that, because her other boys were traditional "macho" males, she was afraid they would taunt, or possibly hurt, Max.

According to Ryan, the four-year-old flamed so brightly that "he'd take a towel and put it on his head like it was hair, and then he'd start lip-synching to Britney Spears." The...household was just not a safe place for Max. She eventually placed him with a gay couple from L.A.

In the case of the girl, who we'll call Sandra, Ryan said she was born to a young Hindu woman who did not want to confront her parents. After Ryan's failed attempts to place Sandra in a good home, she eventually adopted the child herself.

Ryan says she told the birth mom, "Listen, I'm always going to feel like this is your child." "I'd never felt like it was mine."

The three kept in regular contact, and, about five years later, mother and daughter were reunited."

On the now-defunct "A Aabagails Silver Spoon Adoptions" site, Ryan was credited with creating "the concept which is currently referred to as 'adoption facilitating.'" Yet the site also stated that the company was merely in the advertising, not facilitating, business.

But hey, prospective parents may want to give it a shot. A new baby was added June 16.