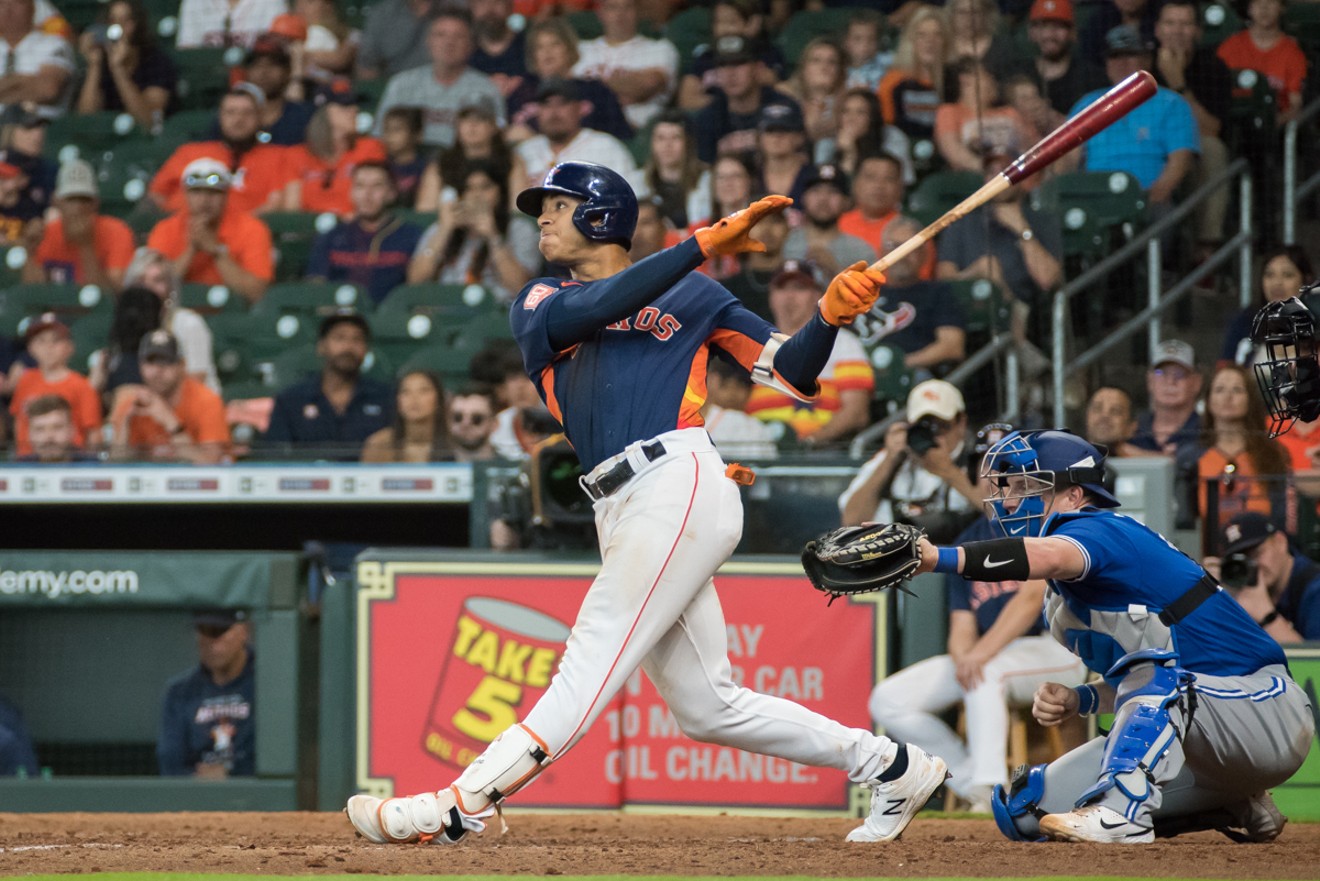 Jeremy Pena has been one of the best shortstops in baseball this season. Photo by Jack Gorman
The biggest Astros storyline of the offseason coming off of 2021 and heading into 2022 was the future of shortstop Carlos Correa. You could split the Astro faithful right down the middle, as for every fan that wanted Jim Crane to #PayTheMan (to the tune of a ten year deal for over $300 million) there was a fan who wanted Crane to let Correa walk, and find an alternative shortstop solution.

With a best and final offer of five years for $160 million to Correa, and with Crane and GM James Click not willing to play in the muck of a "slew of one year deals disguised as a multi-year contract" like the Minnesota Twins would, the Astros opted to move on from one of the most popular players in franchise history, and a former number one overall draft pick.

From there, the team could have identified alternative, cheaper-than-Correa veteran free agent solutions like Trevor Story, who was still available when the team finalized its determination to move on from Correa. Instead, they went with the solution I am guessing they were going with all along — minor league shortstop Jeremy Pena.

To say that Pena has moved seamlessly into the vacuum left behind from Correa would be a massive understatement. Thus far, this season, not only has Pena exceeded what Correa has done in Minnesota, he's been superior to pretty much all of the veteran shortstops tussling for nine figure deals on the open market this past winter. (We will get to those numbers in just a second, I promise.)

Hell, even H-E-B has quickly fallen out of love with Correa, and slid Pena into the corny (and I mean "corny" as a compliment) ads they run during the Astros games:

Shout out to Lance McCullers getting some H-E-B run, as well. Get well, Lance!

So I say "Good for you, Pena!" It's not easy replacing a player as touted, as elite defensively, as solid offensively, and as big a culture bastion as Correa, and Pena has done so with a sublime combination of productivity and maturity.

Just how good do the Astros look in making this decision to choose Pena (and his $700,000 salary) over Correa? Well, let's compare the basic numbers of Pena's situation to that of Correa and Correa's free agent shortstop brethren. First, here is where we are with Pena, including his OPS (on base plus slugging percentages), WAR (Wins Above Replacement, a cumulative stat measuring awesomeness, pretty much) and current contract. Stats are as of Monday morning:

JEREMY PENA, Houston Astros
.851 OPS, 2.2 WAR, Contract: league minimum, $700,000
Some really solid numbers for a guy who had played all of 30 games above A-ball in his entire career before joining the big leagues this spring. It also must be mentioned here that the Astros have Pena under team control for five more seasons, two more at league minimum, and three more where he is arbitration eligible before free agency. If he continues to play like this, Pena will definitely be a candidate for an early contract extension, friendly for both sides, from Crane in the next couple years.

CARLOS CORREA, Minnesota Twins
.731 OPS, 0.7 WAR, Contract: 3 yrs / $105.3 million (includes player opt-outs after each season)
Correa got off to a very slow start, but was beginning to pick up steam until he got beaned on the hand, and had to spend time on the IL, including missing the series against his former team earlier this month. Correa is now healthy again, with a presumed goal of playing well enough to opt out after this season and see if that elusive 10 year deal exists anywhere.

COREY SEAGER, Texas Rangers
.746 OPS, 1.0 WAR, Contract: 10 yrs / $325 million
MARCUS SEMIEN, Texas Rangers
.476 OPS, 0.0 WAR, Contract: 7 yrs / $175 million
The Rangers forked out half a billion dollars to these two within mere hours of each other, essentially marrying themselves to a middle infield of Seager and Semien into the mid-30's for each guy. The Rangers are a better baseball team than they were before the signings, but that's not saying much. They're still mediocre overall. Seager has been fine, but Semien has been a disaster. It's early, but this sequence of decisions by the Rangers is not a great advertisement for rebuilding through spending.

TREVOR STORY, Boston Red Sox
.748 OPS, 0.8 WAR, Contract: 6 yrs / $140 million
Like Semien, Story has had to change positions to second base, and he started the season slowly. A three home run game this past week kind of skews his numbers a bit, but the concern for Red Sox fans will be "How does Story hit over time outside of Coors Field?"

JAVY BAEZ, Detroit Tigers
.575 OPS, 0.4 WAR, Contract: 6 yrs / $140 million
Baez is another one that, like Semien, has been a mess, so far. Reportedly, the Tigers offered Correa a 10 year deal, but it was for "only" $275 million, so Correa balked at it. They went with the fallback plan of Baez. This is why they're the Tigers.

SUMMARY
I'll net this out very simply — so far, Pena has the highest OPS on this list, has almost as many Wins Above Replacement as the other five guys combined, and he is also younger than everyone on this least by at least three calendar years. And he makes 2 percent — literally, TWO PERCENT — of what Correa commands in annual salary. Score one for the team of Crane and Click!