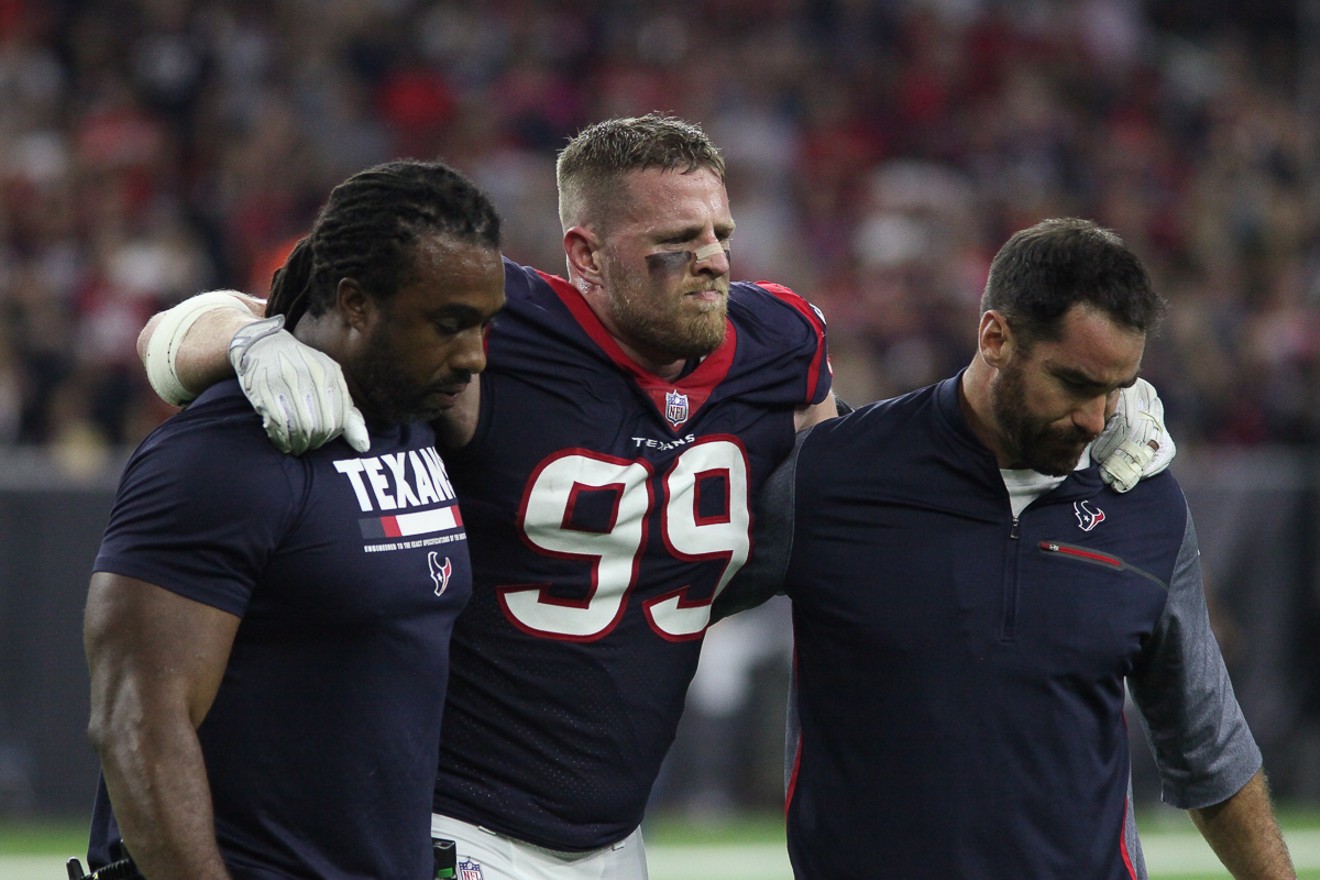 J.J. Watt may add more hardware to his shelves in 2018, if he wins Comeback Player of the Year. Photo by Eric Sauseda
There's never a bad time to win an award. Awards are cool, and we all love trophies. Most awards are the result of good old fashioned hard work and netting a result better than your peers. However, certain awards come with a necessary path that can be downright painful, mentally and physically. Such is the NFL's Comeback Player of the Year Award, which by its mere name — COMEBACK player — indicates that some sort of devastation occurred in the life of the recipient.

In the NFL, and with this award, the devastation is nearly always medical, so the winner has oftentimes made it all the way (or close to all the way) back from some sort of catastrophic injury, which, by definition, makes about half of the Texans' roster eligible for this award in 2018.

As we all know, every roster has headliners, and even the Texans' 2017 injury list has its headliners, and given the fact that winning Comeback Player of the Year probably requires at least a degree of star power, there are really two key Texans that have a chance to win this award — quarterback Deshaun Watson and defensive end J.J. Watt. In fact, Pro Football Focus made them the No. 1 and 2 candidates for the award in a recent post, in which they had this to say about each:

"With two season-ending injuries in a row, J.J. Watt has become somewhat forgotten with the emergence of Aaron Donald as the NFL’s premier defensive player over the past two seasons, but let’s not forget that from 2012 to 2015, Watt produced PFF grades of 95.0 or higher across all four seasons, including a ridiculous 99.5 PFF grade in 2013. Utterly dominant as a pass-rusher, Watt has racked up 87 sacks, 159 hits, 211 hurries and 46 batted passes in his career so far. He looked dominant once again over the first four games of the 2017 season, and while he didn’t register a sack, he did manage to register a hit, hurry or batted pass on 13.6 percent of his pass-rushing snaps. The big question with Watt is how good he can be coming off back-to-back season-ending injuries. If he’s even 95 percent of the J.J. Watt of old, the rest of the NFL better watch out."


"Texans fans have many reasons for optimism, with another key player returning from injury in starting quarterback Deshaun Watson. Watson recovered from a brutal performance in the season opener to deliver plenty of big plays for the Texans. One eye-popping stat from last season was that Watson led the NFL with 11 touchdown passes off play action, despite playing only half a season due to the injury. A note of caution though, while that stat is eye-popping, success from play action is rarely a stable metric season-to-season, so we shouldn’t expect quite a dominant stat line in 2018. Keeping pressure away from Watson will be key as he returns, both to protect him from injury, and also because in his limited time on the field, he led the league with a 124.1 NFL passer rating on plays when he was kept clean. With Watson and Watt back on the field, the Texans will feel confident that they can reclaim the AFC South crown."

For the record, the other three players in the top five for the award, according to PFF, were Arizona RB David Johnson, Giants WR Odell Beckham, Jr., and Packers QB Aaron Rodgers.

Here is the thing, and I say this with all due respect to Watson, Johnson, Beckham, Rodgers, and any other player injured in 2017 — if J.J. Watt can just be upright and walking at the end of the 2018 season, he is winning this award. Deshaun Watson could throw for 4,500 yards and 40 touchdowns, and if Watson is merely playing football at a reasonable fraction of Peak Watt performance, the award belongs to J.J.

I have two reasons for this take. First, Watt's injury comeback saga has been a process that goes back over two years, back to the 30-0 playoff loss to the Chiefs in early 2016, when Watt was helped from the field with a shredded groin. Since then, he's had two back surgeries in 2016, and a broken leg in 2017. Watt has spent far more time rehabbing injuries than game planning for the next opponent these last two years. When it comes to medical issues, no star player has dealt with more than J.J. Watt the last two years.

Second, It's J.J. FREAKING WATT, which is to say that the voters will be one billion percent sentimental in making the Comeback Player of the Year award the next touchy-feely piece of recognition that Watt gets for being an exemplary human being. J.J. Watt's work ethic is the most workmanlike of all the work ethics!

So in this week where sports gambling was finally made available to each state in our country (should they choose to partake), go ahead and plunk a sawbuck down on J.J. Watt to win Comeback Player of the Year, if it's available to you.

And thank me later.