Four Thoughts on the Miraculous Return of J.J. Watt 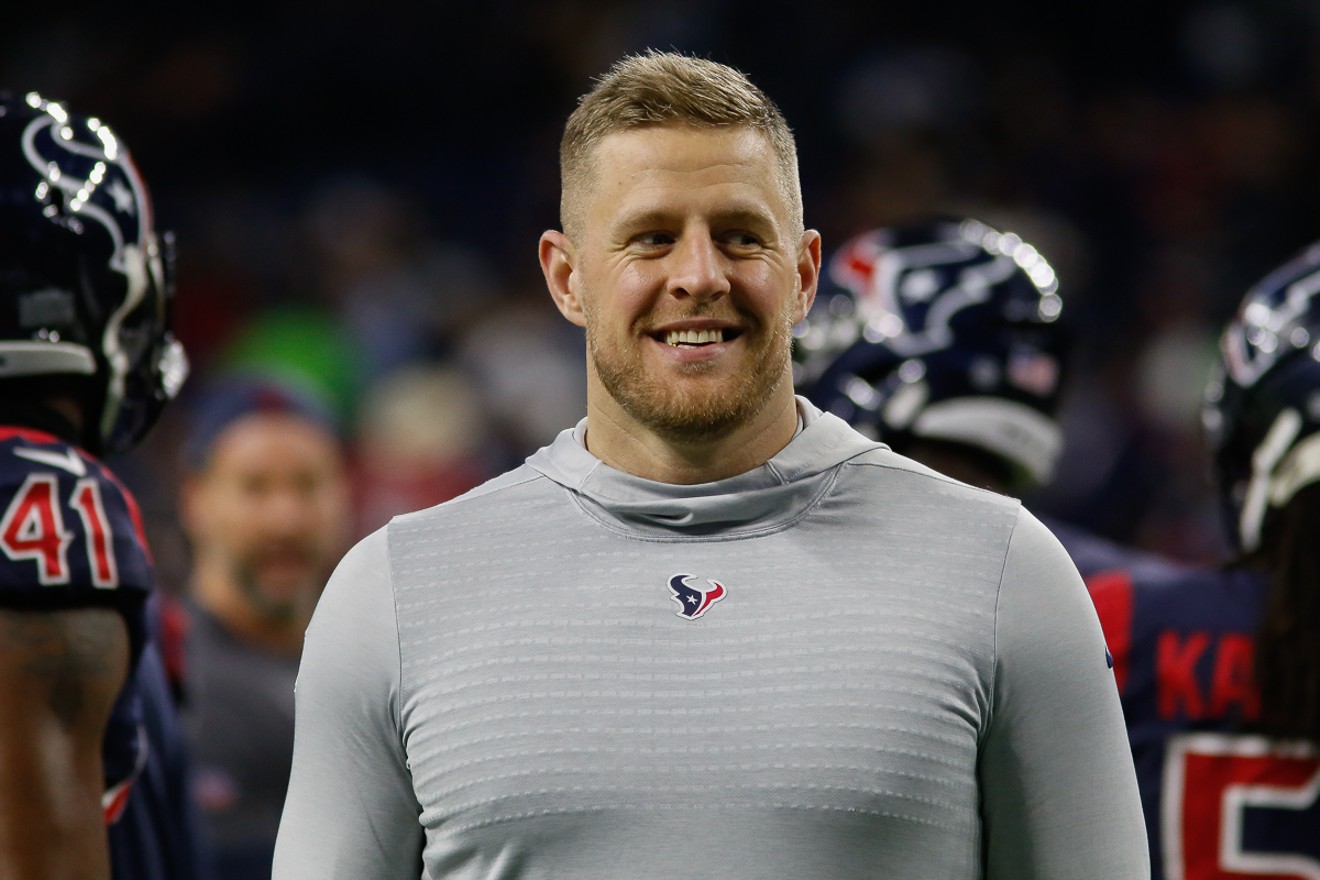 J.J. Watt in street clothes on the sidelines may be a thing of the past come playoff time. Photo by Eric Sauseda
On October 27, 2019, J.J. Watt made a seemingly innocuous tackle for loss in the Houston Texans' 27-24 win over the Oakland Raiders. Most fans and media members didn't even notice Watt's fiddling around with his left shoulder and arm after the play. Watt somewhat gingerly lined up for the next snap, and then called for a substitute. That was the last we saw of Watt on the field in 2019.

A torn pectoral muscle, an injury that ended seasons for former Texan Mario Williams (in Watt's rookie year) and Whitney Mercilus (in 2017, just a few plays before Watt's 2017 would end with a leg injury in Week 5), would be the diagnosis. Williams and Mercilus both suffered their injuries in Week 5 of those seasons, and this was Week 8 for Watt, so surely he was done for the year, right?

Watt even tweeted as much that night....

This game can be beautiful and it can also be brutal. Absolutely gutted that I won’t be able to finish the season with my guys and give the fans what they deserve. I truly love this game and can’t stand letting you guys down. Thank you for all of the thoughts & well-wishes.

So while the Texans' pass rush slid into the toilet over the last couple of months, smoke began to develop around a possible return for Watt. The Texans brushed it off, many media outlets said it was improbable, but then came this tweet from Watt just last week...

It’s not over though.

And then this report from Ian Rapoport of the NFL Network on Saturday ....

From @gmfb Weekend: The #Texans are expecting star DE JJ Watt back for the playoffs, while the #Bucs are bringing back QB Jameis Winston for 2020. pic.twitter.com/VM7VtITjFO

And so it was, on Christmas Eve morning, that the Texans called an impromptu press conference at 11:30 a.m. for an undisclosed reason. The news would leak ahead of the press conference, courtesy of John McClain of the Houston Chronicle, that the Texans' Festivus Miracle was complete — J.J. Watt, less than two months removed from suffering an injury that typically takes four to six months from which to recover, would be returning to the practice field, and to help lift the Texans' anemic pass rush to some playoff success.

So, let's dig into this most unlikely of Christmas presents from the football gods....

Where does this comeback rank on the Watt resume?
This question probably deserves its own post. Off the top of my head, if you were to ask me Watt's most impressive feats as a football player, the first things that come to mind —- finishing runner up in the MVP voting in 2014, scoring five touchdowns in 2014, multiple 20 sack seasons, winning Defensive Player of the Year in 2015 with a torn groin and herniated disk in his back during the second half of the season (oh, and a club hand for a month), his comeback season in 2018, the pick six in his rookie year against the Bengals in the playoffs. As a human being, he's raised millions for after school projects, raised over $40 million for Hurricane Harvey, and inspired millions of kids (including three of my own) with his positive energy and selflessness.

So to rank this comeback is tough. It's like choosing which of your kids is your favorite. They're all sort of tied for first. I will say that this comeback is the closest thing we've seen to J.J. Watt having some weird superhero qualities. Or really good doctors and advanced medicine. Whatever the case, this is remarkable, and just what the doctor ordered for the Texans. 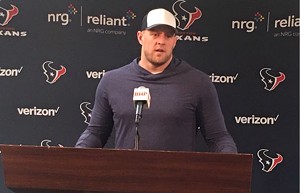 Some very welcome news at a Wednesday press conference.
Photo by Sean Pendergast
What can we expect from J.J. Watt?
Similar to Watt's comeback in 2018 from two traumatic season ending injuries the previous two years, I don't know if any of us have any sort of clue what to expect. I would suspect Watt himself knows better how he will do this time than in 2018, given the fact that this was a pectoral injury and none of the overall explosiveness that Watt had shown pre-pectoral tear is in question. In 2018, he was coming back from one of those injuries that could have just taken his motor down two gears and made him mortal. This is a much simpler injury, a much more routine comeback. To me, I'm curious how much risk there is of a re-tear, but there's only one way to find out. The good news is, if it happens again, Watt should still be ready for 2020.

The Whitney Mercilus Effect
Through the first eight games of the season, the eight games where Mercilus had Watt attracting all sorts of attention on the opposite end of the defensive front, Mercilus was putting up all sorts of crooked numbers in the box score. Since Watt left, Mercilus has been serviceable as an edge defender; he's always solid against the run, but he's been short on impact plays (his 86-yard interception return against the Titans notwithstanding). Here are the splits:

If we're being super picky, the two sacks since Week 9 came in the Tampa Bay game on Saturday, so Mercilus had gone sack-less since Watt's injury until this past weekend. In a contract year, Mercilus could use Watt back in the worst way, although O'Brien gushed about Mercilus in Saturday's postgame, so maybe the two sides will find common ground. Either way, Mercilus' job got easier on Tuesday.

Let's keep one eye on J.J. Watt's upcoming offseason
This was always going to be a crucial offseason, in my opinion, for the final phase of the Watt-Texan partnership. After 2019, Watt has two seasons of non-guaranteed money remaining on the monster deal he inked back in 2014, for a total of $33 million. The Texans don't normally redo contracts with multiple years remaining, but Watt is (and has been, in the past) an exception to that rule.

I preface all of this by saying that it's hard to envision contract talks between these two sides getting super contentious under almost any circumstance, but a third season-ending injury for Watt would have certainly given the Texans some degree of leverage in negotiations.

Now, if Watt comes back to be vintage Watt, it almost shifts leverage back over to the player. It makes for a fascinating wrinkle in what I think most Texan fans hope is a final contract to try to ensure that J.J. Watt ends his storied career in no other NFL uniform, strolls into the Ring of Honor, and then the Pro Football Hall of Fame.