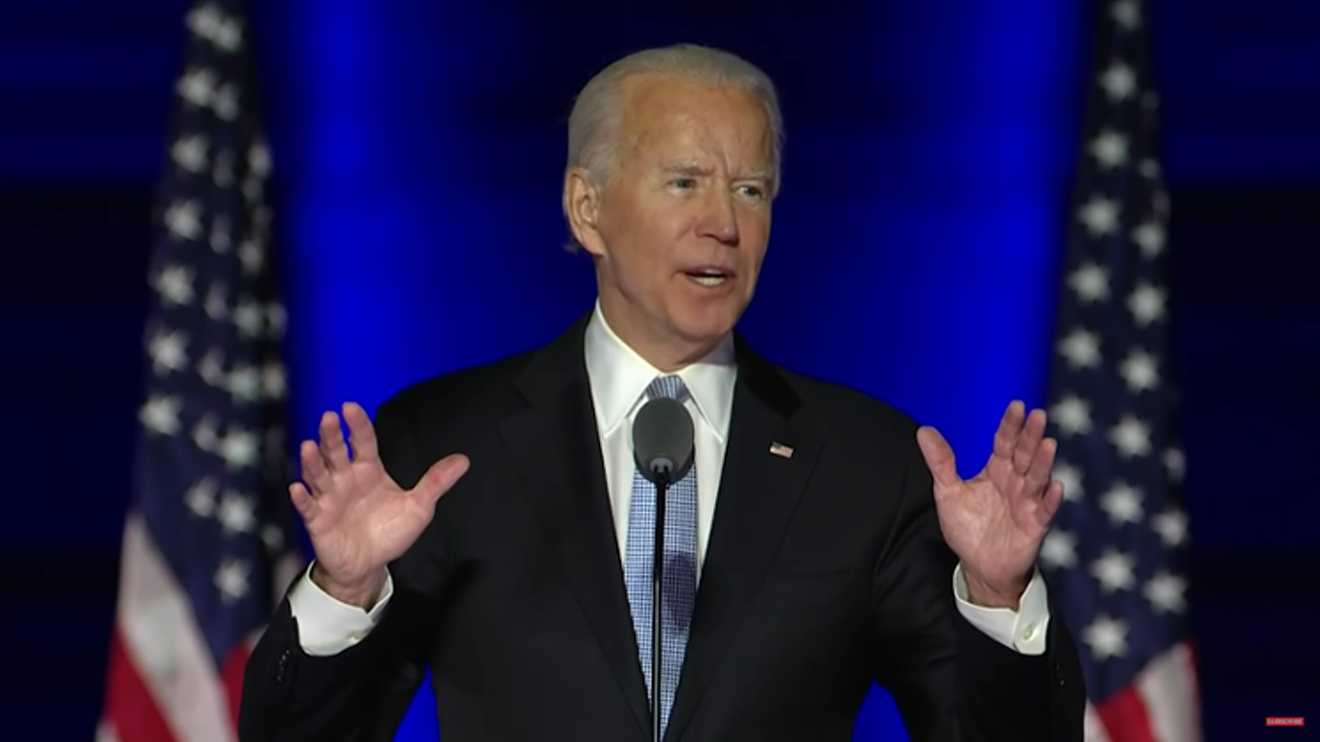 President-elect Joe Biden addressed the nation Saturday night after all major news organizations projected his victory over Donald Trump. Screenshot
One of the most emotional moments of the 2020 election cycle came during the Democratic National Convention. Amid all the stars and political bigwigs was 13-year-old Brayden Harrington, who in an emotional video talked about how President-Elect Joe Biden had shared tips with him on dealing with his stutter. The two had met at a New Hampshire rally in February when Biden was still vying for the nomination.

“It was really amazing to hear that someone like me became vice-president. He told me about a book of poems by Yeats he would read out loud to practice,” he said in his video. “He showed me how he marks his addresses to make them easier to say out loud. So I did the same thing today. And now I’m here talking to you today about the future, about our future.”

Biden has stuttered throughout his life, which is quite a disability to have when your job often involves speaking with authority. As the ugliness of the presidential campaign season ramped up, many used Biden’s speaking patterns to accuse the 77-year-old statesman of mental incapacity. It was ableist garbage that had no place in the discourse, but still found root in the talking points of the cruel. It also reinforced traditional stereotypes of people with stutters, something Biden is well aware of despite his lofty ascension.

The new commander in chief’s openness about his disability is actually quite a first. America has had disabled presidents before. The most famous case is Franklin Roosevelt, who often used a wheelchair or leg braces because a childhood case of polio had left walking painful and difficult. These days, Roosevelt is openly portrayed as disabled in statues and Hollywood films (sometimes while machine gunning werewolves!), but that was not the case when he was alive. “No pictures of me getting out of the machine, boys,” he would famously say to press covering him as he would get out of a car with leg braces on.” The press obliged, and though the country was mostly aware of the disability everyone was careful to make sure FDR never looked disabled.

He wasn’t the only one. John Kennedy had Addison’s disease, a condition of the adrenal glad that leads to extreme fatigue, joint pain, and weight loss. He and his physicians worked hard to keep the disease under wraps even when opponents accused him of having it.

Biden, by contrast, has no problem speaking at length about his disability and the prejudice he sometimes experiences because of it. He is unashamedly open about how it has affected his life and what mechanisms he uses to cope with it. The toll it takes on him is very apparent to anyone who has watched speeches with him since summer, when it became clear opposition forces were going to lean into the idea of Biden as mentally incompetent.

It was incredible to see him overcome his condition during the campaign, knowing that any slip of the tongue or linguistic falter would be chopped and edited into grim videos portraying him as a man too broken too lead. As a person with a mental disability myself, I loved watching him plow ahead with his goal anyway. He never let his diagnosis and impairment become a shameful secret. He refused to lie or downplay, daring his opponents to call the 61 million Americans with disabilities unfit for high office. It was a gamble, and it clearly paid off.

Roosevelt and Kennedy weren’t liars or too weak to face such scrutiny. It’s more that the country just wasn’t ready to deal with disability as a sign off strength in their times. As we celebrate Kamala Harris breaking the many barriers she has, let’s spare a thought for a smaller, but significant one Biden has also shattered. He stood in front of the country, let us know he had a disability, and asked to be judged on his merits for the presidency with that information included openly.

Who knows how many kids like Brayden Harrington that has inspired? Who knows what gains in disability rights and representation this will bring? Joe Biden’s election has already moved the needle on a marginalized portion of the population that too often is ridiculed, ignored, and treated as unworthy.
KEEP THE HOUSTON PRESS FREE... Since we started the Houston Press, it has been defined as the free, independent voice of Houston, and we'd like to keep it that way. With local media under siege, it's more important than ever for us to rally support behind funding our local journalism. You can help by participating in our "I Support" program, allowing us to keep offering readers access to our incisive coverage of local news, food and culture with no paywalls.
Make a one-time donation today for as little as $1.