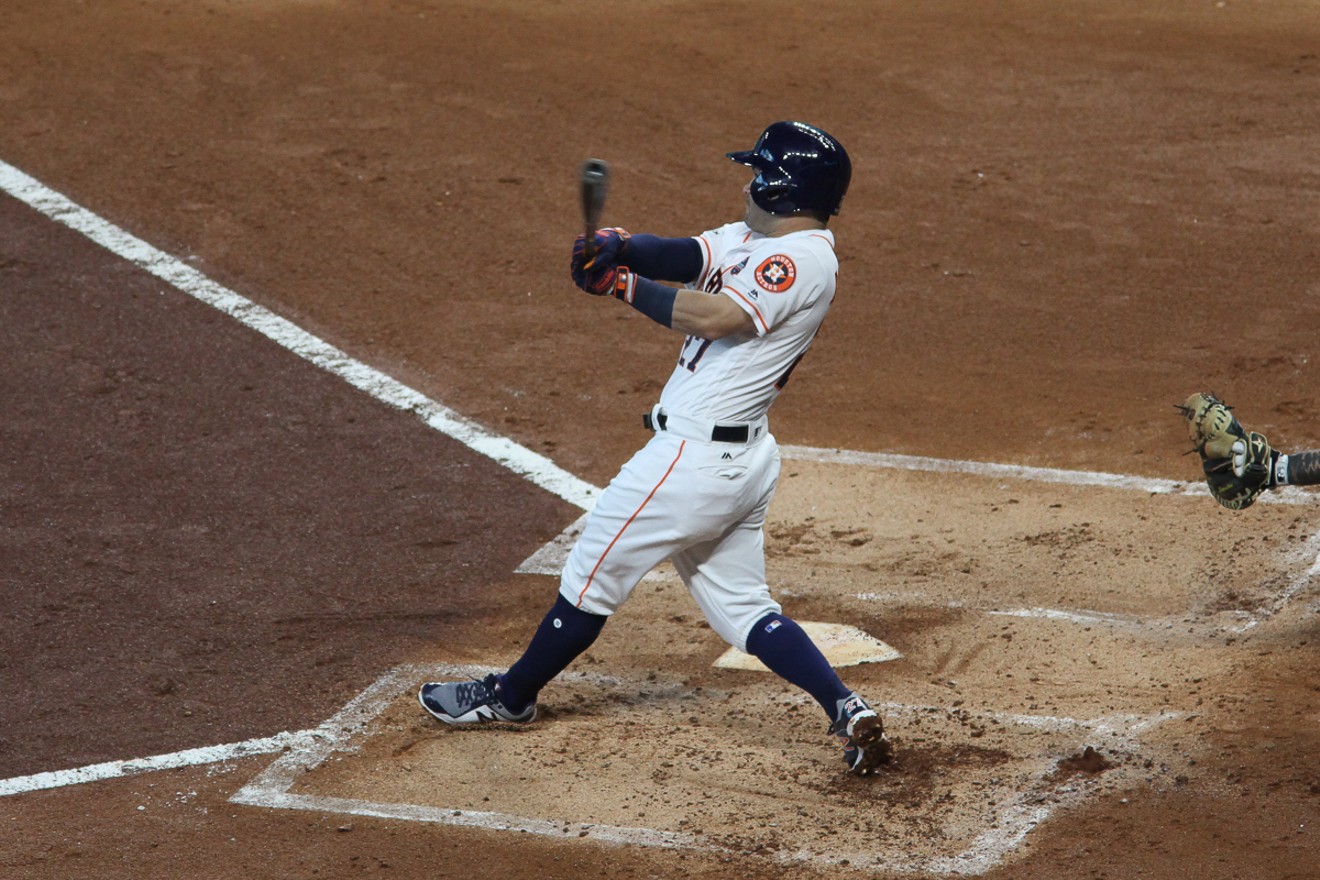 Jose Altuve is the first MVP for the Astros since Jeff Bagwell won the NL MVP in 1994. Photo by Eric Sauseda
Friday was a great contractual day for Houston sports fans, in two very different ways. We covered the Houston Texans giving a beyond reasonable one year, $7 million contract to Tyrann "The Honey Badger" Mathieu late Friday night, a signing which set off Twitter celebrations throughout the city.

Earlier in the day, though, there was a more profound, more "big picture" meaningful deal reached between the Houston Astros and their second baseman, reigning American League MVP Jose Altuve. The two sides reached an agreement on a five year, $151 million that will begin as soon as Altuve's current deal expires after the 2019 season. The deal was first reported by MLB.com's Brian McTaggart:


Similar to the reaction to the Mathieu deal, Twitter approved, to say the least.

That stack of cash is gonna be wayyyy taller than you bro @JoseAltuve27!!! Congratulations brother, very well deserved!!!


The nearly identical exuberant reactions are great indicators of where the two franchises are — Texan fans giddy over a mere one year deal, but for a star player at a position where the franchise has never had star power, a brick in the reconstruction of a dilapidated roster. Meanwhile, Astros fans are rooting for a roster that is fully constructed and ready to win again, but the Altuve deal extends the window of championship relevance, and that's a beautiful thing.

Let's examine a few facets and ripple effects of this Altuve deal:

4. Jose Altuve officially becomes one of the greatest underdog stories of all-time.
At this rate, someday, they'll do a "30 for 30" on Altuve's career and his ascent from nearly forgotten Venezuelan teenager to the best player in baseball. Here is a pretty good summary of the timeline, thus far, from ESPN.com's Darren Rovell:

Tried out for Astros.

When you want to give up kids, look no further than Jose Altuve. pic.twitter.com/K3306pJJje

The question now is "What needs to happen for Altuve to become the greatest Astro of all time?" Make no mistake, recent bias (not to mention the constant drumbeat of social media pounding our brains) has put Altuve at the top ALREADY for some Astro fans. That's a tad premature. On a peak performance judgment basis, there absolutely is an argument that Peak Altuve is the greatest VERSION of an Astro ever, considering the multiple 200 hit seasons and multiple batting titles. Add in his massive improvements in pitch selection and power numbers over the last few years, and there is no question that Altuve is in the HOV lane to Cooperstown. If he lives up to his end of this contract, and barring five Peak A-Rod-type seasons from Carlos Correa, then Altuve will likely have surpassed Craig Biggio and Jeff Bagwell for the title of "greatest Astro ever."

3. This is a great contract for both sides.
There is no question that MLB teams have gotten smarter about free agency. We saw it this past offseason as A-list free agents languished on the market waiting for teams to give them ostensibly stupid contracts, just like they'd done for decades previously. This new age of general manager collectively realizes the value metric on free agents versus team-controlled players, and it has to be KILLING Scott Boras, Altuve's agent and, until recently, the most powerful figure in MLB contracts. Teams are digging in, and they're not giving out, generally speaking, the lengthy eight-to-ten year mega-deals anymore. They're not paying for empty seasons at the end of a contract just to lock up what's left of a player's prime. To that end, this deal is fantastic for both sides — Altuve gets his pay and his respect, and (for now) the Astros are paying him until he's only 34 years old, which barring injury) should still be an age where we are getting close to Peak Altuve.

2. Jim Crane has passed the first part of his final exam for "all-time great owner."
There is no question that Jim Crane is a good owner — any question of that, notwithstanding the immunity that a World Series title should give an owner for at least a few years, has been answered time and again over the last three seasons. When the team has needed resources in free agency, in trades, in swallowing most of Justin Verlander's contract, Crane has given GM Jeff Luhnow the green light. However, the lingering question has always been "When it comes time to dole out a nine-figure deal for a core player, will he do it?" That answer is now "Yes," and the only player left for Crane to lock up to where it effects his Q-rating as an owner is Carlos Correa. Once Correa is locked up to a long-term deal — a deal that, by the way, will dwarf even Altuve's deal once it's done — Crane will have passed the entire exam.

1. This cements the Astros as a "destination" team for the next several years.
One thing about being a team not named the Red Sox, Yankees, Dodgers, Cubs, and maybe one or two others — your roster is the Rodeo Drive of window shopping for fans of those teams. I know this, having grown up a Red Sox fan, that in seasons when those teams are down and looking for a quick fix, those fans are surfing Spotrac to see when players from about 80 percent of the other teams are hitting free agency. Make no mistake, there were fans of those "blue blood" teams ready to pounce on Altuve in 2019. Now, not only is that not happening, but this two year championship window that has been openly discussed for the Astros, and has been set at "two years" in part because that's when Altuve and Verlander were both up for new contracts, that window is now extended, from a perception standpoint, if nothing else.

The Houston Astros are a destination team, and appropriately, they reinforced that by extending the guy who's been here longer than anyone. Jose Altuve, forever (we hope) an Astro.