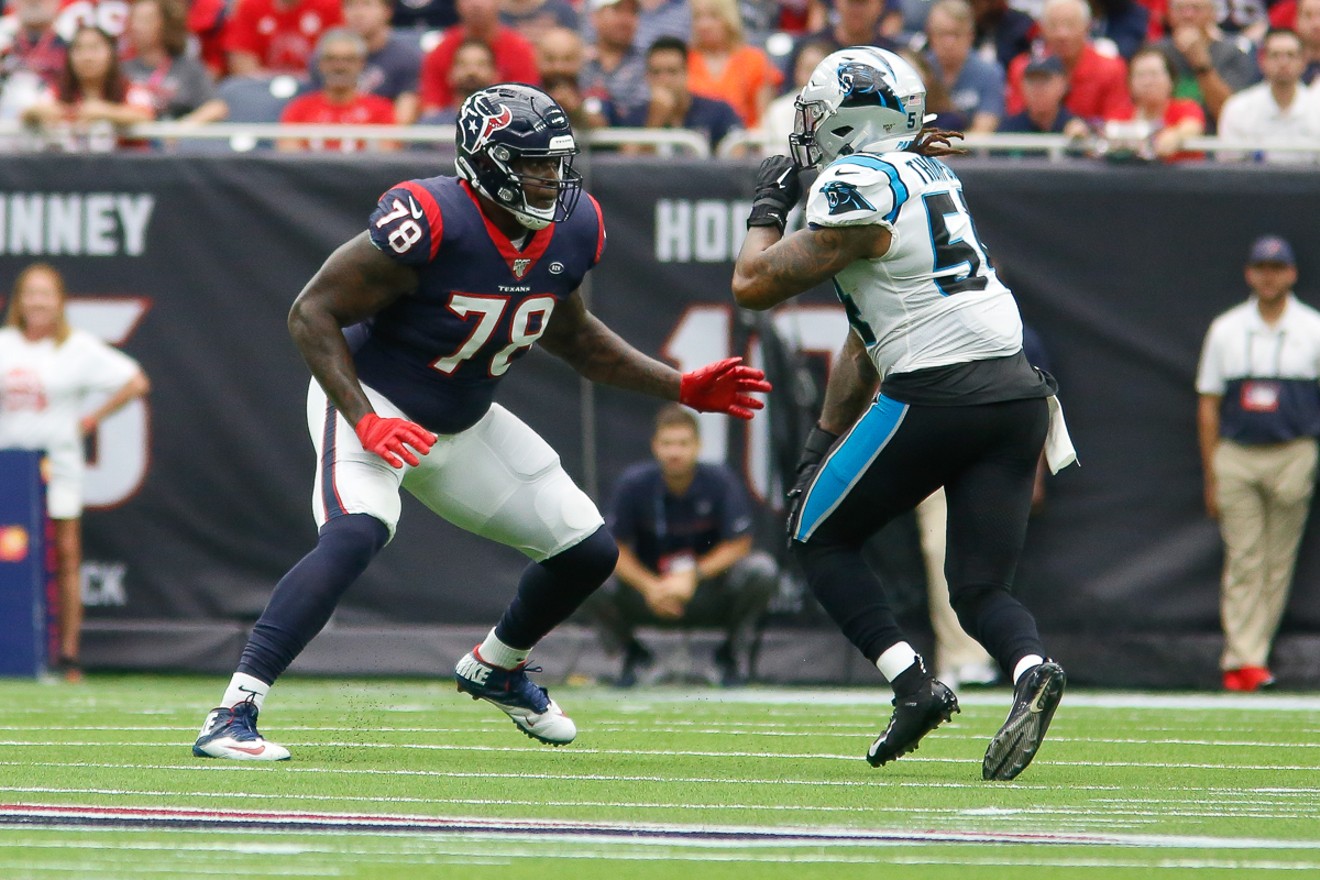 Laremy Tunsil is now the highest paid offensive lineman in NFL history. Photo by Eric Sauseda
In a time on the football calendar, and in an unprecedented era in our history, when Bill O'Brien can accomplish very little under the "head coach" umbrella of his job description, the Texans' also-general-manager went to work this weekend trying to fortify the roster for the 2020 season. Yeah, there was the NFL Draft, which we will get to at another time, but O'Brien also managed to check off one of his most crucial to-dos of the offseason, inking left tackle Laremy Tunsil to a massive contract extension:

In a GM reign that has been filled with criticism, and at times even vicious anger, from pundits and fans, perhaps O'Brien's NOT signing Tunsil to an extension on the day he traded for him last August has been the decision most point to and say "What the hell are you doing, William?" (Well, among decisions that don't involve DeAndre Hopkins, at least). At the time, I wasn't AS critical as most, knowing if Tunsil was merely pretty good in 2019, he would be resetting the tackle market anyway after the season.

In more detail, my thoughts on Tunsil's new pile of cash:

We knew this was coming, and I'm cool with it
Again, we knew this day was coming since the Texans sent two first round picks, a 2021 second round pick, and some other trade debris to the Dolphins for, essentially, Tunsil and WR Kenny Stills. We knew Laremy Tunsil was going to become the highest paid tackle in the history of the sport. Having lived through the post-Duane Brown Holdout Era — Chris Clark, Julien Davenport, Martina Rankin, oh my — it's nice to have Deshaun Watson's blind side protected for at least the next four seasons, and probably far longer. People are pointing at the three years and $66 million added onto the 2020 season (Tunsil was already under contract for 2020), and saying "LOOK, HE IS MAKING $22 MILLION PER YEAR... OMG, O'BRIEN!" However, Tunsil's 2020 salary is just over $10 million, so the average over four years is more in the $19 million annual neighborhood, which I'm fine with. Again, Tunsil is just 25 years old, he's already good to excellent, and still has room to improve. Check off this to-do, and go do more work, O'Brien.

"Smart, tough, and dependable" takes on a different meaning
Bill O'Brien loves smart, tough, dependable players. He says it in every press conference. Hell, there's even a graphic that the Texans' social media team tweets out and embeds in videos welcoming every new player to the team. It's somewhat exhausting, but it is what it is. Well, the "smart" portion of that also means that you have players who supplement their football intelligence with raw intellect and street smarts. Players, such as, oh I dunno... LAREMY TUNSIL? Check this out...

Laremy Tunsil negotiated his own $22M per year deal directly with Texans coach-general manager Bill O'Brien without an agent. Tunsil got advice from advisors. He did extremely well in his negotiations one year after being traded from Dolphins for two first-round picks.

How awesome is that? Smart doesn't only mean knowing your blocking assignment. Smart also means banging out your own record-setting deal. Good for Tunsil. It's crazy to think that just four years ago this past week, he was getting victimized on draft night by a Twitter hack posting a damning weed smoking video of him online. Four years later, Tunsil is hammering out his own standard-resetting deal. I love this guy! So does J.J. Watt!


Of course, if they'd made peace with Duane Brown.....
While I love having Tunsil on the team, and have overflowing football love for the man himself... YOUZA, that is a large price to pay for a left tackle — two first round picks and a second round pick for the right to have him chew up over ten percent of your salary cap. That's a big buy-in at the "we mist protect our QB" poker table. It affixes a price tag, in some sense, to the team's fallout with former left tackle Duane Brown, who is still playing at a high level in Seattle. If the team had just been able to make peace with Brown back in 2017 — an acknowledged near impossibility, I get it, but still — in theory, Deshaun Watson would have been well protected in his rookie season of 2017, in 2018, in 2019, and a few more years, and the team would have been welcoming an impact player of some sort from the first round of the draft this weekend, not to mention two players next year in the first and second round.

What now for Deshaun Watson?
As O'Brien checks off "sign Tunsil" on his to-do list (by the way, I like to think O'Brien has all of his GM tasks written on the back of an envelope and he is literally crossing them off as he goes), the Brinks truck now heads across town to Deshaun Watson's house.....


Source: The #Texans have engaged in “very preliminary“ discussions with QB Deshaun Watson on a potential contract extension. With Laremy Tunsil’s contract complete, Watson is the next priority. The is team hoping to reach an agreement before the start of the season.

If you think the Tunsil contract was massive, you ain't seen nothing yet. Watson might crack $40 million per year in new money added to his current deal, and give Bill O'Brien his second "position standard resetting" contract handed out in one offseason with the GM title.