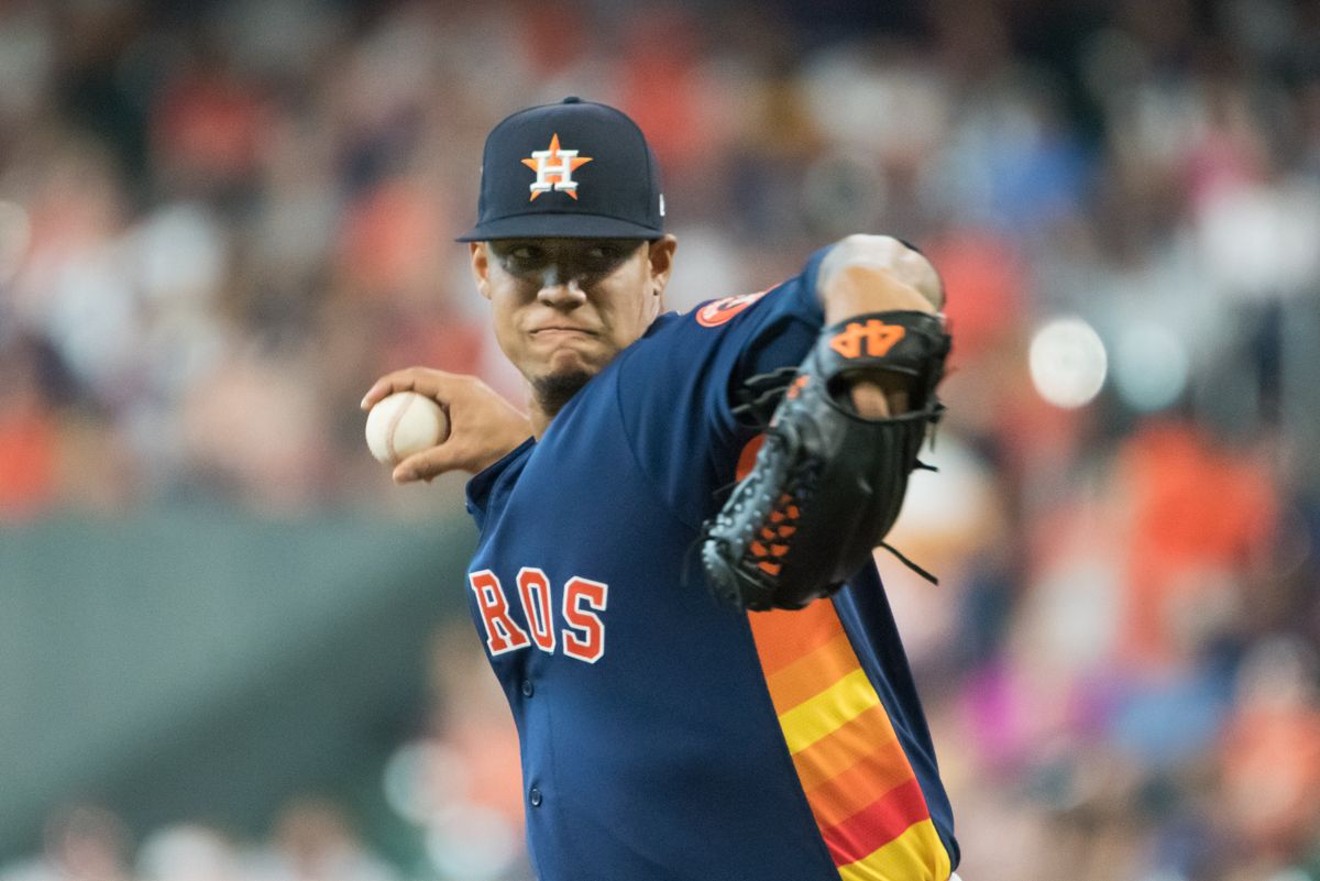 Reliever Bryan Abreu has been absolutely dominant in August. Photo by Jack Gorman
The couple weeks of August are the dog days of summer in baseball. Teams bog down in the heat and everything feels slower and more arduous. That is, except for the news apparently, because, my goodness, there was a ton of it this week. We won't even dig into Mariners rookie Julio Rodriguez and his eye-popping, potentially game-changing contract and how it might impact the Astros' ability to sign Kyle Tucker and Jeremy Peña. That is for another day (and offseason).

For now, there is plenty to discuss from injuries to breakout performances to September call ups. Let's dig in.

First, let's all admit that we frantically Googled "facial disruption" on Tuesday when Justin Verlander's thankfully minor injury information was released by the team. Let's also admit we were shocked the notoriously secretive-on-injuries Astros gave out such detailed info. Had to be good news.

If you saw Chas McCormick after diving into first base last week and dislocating his pinky finger (How ever will he drink tea again?), you know that was nasty. He's still not quite back in the lineup as it remains sore. If we bent that direction, we'd be sore too.

Ryan Pressly's neck, last we heard, was improving. We can only assume he injured it craning over the dugout wall to watch Framber Valdez (more on him in a moment) extend his quality starts streak. He should be back soon.

Aledmys Diaz has been conspicuous before games running on the field and fielding ground balls, but still no word yet on his return from the groin injury. The Astros will most definitely handle Diaz's groin with kid gloves (ahem) so he is healthy for the postseason.

Finally, there are Yordan Alvarez's huge, and very sore hands. One hand was sore before, now the other is sore from compensating for the first one. We recommend those little squeezy stress balls — great for getting out the frustrations over stupid sports writers asking about your hands too.

In case you missed it, Bryan Abreu has been on an absolute tear lately. Since a brutal relief appearance on July 13 in Anaheim where he surrendered four runs in just two-thirds of an inning, he has been nearly perfect. In the last 14 games, he has a zero ERA and has only allowed seven hits and six walks in 15.2 innings while striking out 22. His WHIP during that stretch is 0.830 and the run has brought his ERA for the season down to 2.08. He's gone from someone you couldn't really trust to a high-leverage reliever in a month.

Speaking of streaks, Framber Valdez just tied for second with his twenty-second straight quality start in a row. He is just one behind the all-time record of 23 and now has got to be in the conversation for the AL Cy Young Award. Up until the injury, Verlander seemed to almost be running away with it. But Valdez should now certainly be in the discussion.

Jake Meyers is being optioned to AAA Sugar Land for a "reset."
Photo by Jack Gorman
September literal ups and downs.

In a somewhat surprising but necessary move, the Astros optioned center fielder Jake Meyers to AAA Sugar Land. Meyers, who looked so promising late last season, has not been the same since returning from the shoulder injury that knocked him out of the 2021 postseason. He is slashing .209/.255/.302/.557, but has been worse over the last month. Perhaps more problematic is an arm that cannot seem to even get a ball from the outfield to the infield without a bounce. GM James Click said they were sending him down for a "reset." Seems like the right move.

On the up side, September call ups are upon us and the Astros will add their top prospect, pitcher Hunter Brown on Friday along with catcher/first baseman Yanier Diaz. Brown, 24, has absolutely dominated with a 2.55 ERA, 1.08 WHIP and a .186 average against in 106 innings. The Space Cowboys, obviously in anticipation of the move, brought him out of the bullpen last week where he immediately started firing 99 mph fast balls. He seems ready.

Diaz, 23, has been crushing the ball in the minors slashing .306/.356/.542 with 25 home runs. Adding a catcher might seem odd given the presence of Christian Vasquez, but having a backup for Martin Maldonado means Vasquez will see more time in the DH role and Diaz will give the team flexibility at first as well until the OTHER Diaz returns from injury.

Remember Josh Reddick? Of course you do. WOO! Well, the former Astros and current Savannah Banana (we are NOT making that up) is still stirring the pot — he is a killer follow on Twitter. He recently tweeted that the Dodgers, another of his former teams, also cheated. When asked for proof, he said, "I was there."

Loads of teams and their fans have taken aim (sometimes literally) at the Astros since the 2017 cheating scandal, but none have been as vociferous as LA faithful, who somehow feel like the cheating cost them a World Series (checks notes: it did not). So, to have a former player say they were in on it has got to be a tough pill to swallow for Dodger fans. We'll grab our popcorn and keep an eye on Twitter.

The Astros finished off a two-game sweep of the Arlington Texas Rangers Wednesday afternoon. They head to Los Angeles for a three-game weekend romp with the Angels. It's still tough to believe the Angels have Shohei Otani and Mike Trout, both of whom are healthy, and they have the fourth worst record in the AL. So much money for so few wins. Yikes.

They repeat these two series (with one extra game against the Rangers) next week during a six-game home stand. The closing schedule for the Astros is not exactly murderers row (Tigers, A's, D-Backs) with a couple notable exceptions (Rays twice plus the Phillies). As of writing this, they are 4.5 games up on the Yankees for the best record in the American League with 31 games remaining.

Jeff Balke covers the Astros weekly for the Houston Press and co-hosts the Bleav in Astros podcast with former third baseman and current Astros broadcaster Geoff Blum. Follow him on Twitter.
KEEP THE HOUSTON PRESS FREE... Since we started the Houston Press, it has been defined as the free, independent voice of Houston, and we'd like to keep it that way. With local media under siege, it's more important than ever for us to rally support behind funding our local journalism. You can help by participating in our "I Support" program, allowing us to keep offering readers access to our incisive coverage of local news, food and culture with no paywalls.
Make a one-time donation today for as little as $1.