Good morning Houston! On the I-45 feeder road between El Dorado and Clear Lake City Boulevard. Photo by Jack Gorman 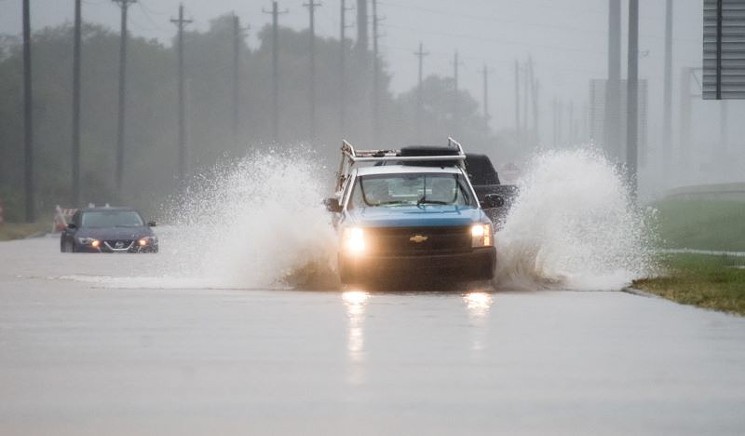 Good morning Houston! On the I-45 feeder road between El Dorado and Clear Lake City Boulevard.
Photo by Jack Gorman

On Monday afternoon, Harris County Judge Lina Hidalgo gave a quick update on the fast-approaching Tropical Storm Beta, which is set to make landfall on the Texas coast near Matagorda Bay about 82 miles southwest of Houston Monday night.

Hidalgo told county residents to be wary of potential pockets of heavy rain over the next 48 hours, but said that the storm shouldn’t pose a massive threat of widespread flooding across the greater Houston area.

“This is not Harvey or Allison in that we expect rain to be dumped all throughout the county, but we do expect those bands to drop water somewhere. We just don’t know where, so that’s why I’m asking everybody to be vigilant,” Hidalgo said.

Beta has already caused high tides in low-lying areas in Galveston and Clear Lake, and could still result in “life-threatening storm surge near times of high tide through Tuesday along portions of the Texas and Louisiana coasts,” according to the National Hurricane Center’s latest update.

On Monday, Space City Weather’s Eric Berger wrote that Beta weakened overnight, and he predicted that there may be some isolated flash flooding in the areas south of I-10. “We don’t anticipate more than some street flooding at this point, but please do take care,” Berger said. 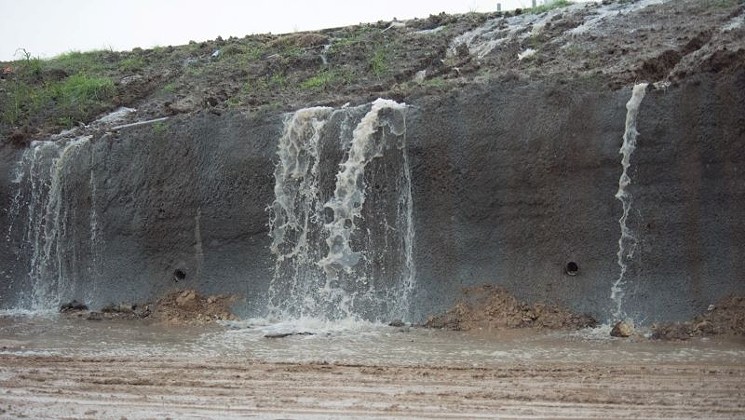 Overflow
Phot by Jack Gorman
Jeff Lindner from the Harris County Flood Control department explained that while there’s still some uncertainty as to how bad Beta will end up being for the Houston region, he’s most concerned about the area around Clear Creek in the southeast corner of Harris County in terms of potential flash flooding.

“At the moment, we think all of our bayous and creeks will be able to handle this rainfall, and if there is flooding, it should be more in an isolated fashion and not widespread,” Lindner said. Based on the latest forecasts, Lindner said he thinks “we’re looking at probably late Tuesday and Wednesday morning” as far as when he expects Beta to have moved through the Houston area. 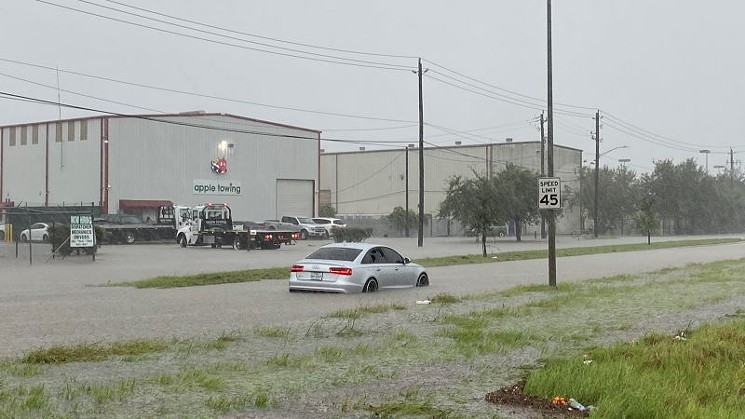 Well if you're going to get flooded out anywhere, right next to a towing business is nice.
Photo by Schaefer Edwards

Beta is the 10th named storm this month alone, which is already an all-time record for September despite there being over a week left until October rolls around. This year is the first time since 2005 that the National Hurricane Center has had to dip into the Greek alphabet for storm names after running through the annually predetermined list of 21 alphabetical storm names — only 21 because apparently there aren’t enough Q, U, X, Y and Z names to go around.

“As Tropical Storm Beta approaches the coast, I urge Texans in the path of the storm to remain vigilant and take necessary precautions to keep themselves and their loved ones safe from flooding, storm surge, and other impacts from this severe weather,” said Gov. Greg Abbott in a statement. On Monday morning, Abbott preemptively issued a disaster declaration for 29 Texas counties along the Texas coast and surrounding areas, including Harris, Galveston and Fort Bend counties.

Half an hour after Hidalgo’s update, Fort Bend County Judge KP George held a press conference during which he asked residents to stay alert in case Beta strengthens as it approaches, and reminded county residents that there’s still a flash flood watch in effect for Fort Bend, Galveston and Harris counties through Tuesday evening.

HISD decided to close all its facilities on Tuesday because of the weather, but at-home instruction was to continue "as long as internet connectivity and power remain intact." However, the students who normally go to the digital learning centers because they don't have computers or WiFi at home, will not be able to do that Tuesday. Also food deliveries were cancelled at apartment complexes as well as curbside pickup.
KEEP THE HOUSTON PRESS FREE... Since we started the Houston Press, it has been defined as the free, independent voice of Houston, and we'd like to keep it that way. With local media under siege, it's more important than ever for us to rally support behind funding our local journalism. You can help by participating in our "I Support" program, allowing us to keep offering readers access to our incisive coverage of local news, food and culture with no paywalls.
Make a one-time donation today for as little as $1.