Houston Mayor Sylvester Turner said he's worried about violent crime and discussed COVID-19 vaccines in a Monday press conference. Screenshot
Amid the news that Houston will likely soon be home to a coronavirus vaccine super site run by the Federal Emergency Management Agency, Houston Mayor Sylvester Turner shared his weekly COVID-19 update stage at City Hall with local health experts who announced that there are now two extra-contagious versions of the deadly virus floating around in the greater Houston area.

Turner and Houston Police Chief Art Acevedo also used Monday’s press conference to talk about Houston's rising crime rate after a spate of shootings over the weekend, and said that getting those violent crime stats moving in the right direction was the city's top priority.

On Monday morning, Gov. Greg Abbott tweeted that FEMA is working with Texas on setting up two mass vaccination sites that could handle 5,000-6,000 shots a day for eight weeks straight. He said the two most likely locations for those sites would be Houston and Dallas.


Texas is working with FEMA to create some Super Sites for vaccinations.

Initially it would likely be 2 sites with 5000-6000 additional vaccinations per day, 7 days a week for 8 weeks.

It would likely start in Houston & Dallas -- with possible expansion to other locations.


The morning announcement was news to Houston Health Department’s director Dr. Stephen Williams. “Actually, we’re not involved in the planning process,” Williams said, explaining that his team heard about the supposed super site via Twitter just like the rest of us. It's not terribly surprising that Abbott didn't consult with Turner's Democratic administration before tweeting out the FEMA news, especially considering how he didn't invite Turner or Harris County Judge Lina Hidalgo to a recent vaccine roundtable discussion in Houston.

“I have made some inquiries, and folks are saying ‘Yes, that’s going to happen,” but they can’t confirm the date or the time,” Williams said.

Turner said he hopes more details will come in a call he has scheduled with President Joe Biden’s administration later this week. “I do know that I will be on a conference call with several other mayors with the White House this coming Friday to discuss vaccine distribution, and I look forward to that conversation,” Turner said.

Houston’s chief medical officer Dr. David Persse also revealed Monday that those same Houston Methodist researchers discovered two Houston residents had been infected with the United Kingdom coronavirus variant, which also appears to spread more easily than the original version of the virus. The first case of the U.K. variant in the Houston region was discovered back in early January in a Harris County resident who lives outside of Houston.

Minter explained that the Fort Bend County resident who caught the South African variant of the virus had flown within the United States via international airports back in December, and has since recovered fully. “We are aware that the household members all tested and tested negative. The person was absent from work, so there were no workplace exposures,” Minter said. She then urged the community to continue wearing masks and social distancing to attempt and limit future cases of this new twist on the virus, which she admitted could already be spreading locally.

Persse said that of the two Houstonians that caught the U.K. virus variant, one is a man in his 50s who is currently hospitalized and travelled domestically before getting sick. The other Houstonian is also a man, but Persse didn’t share his age and said the city is still trying to figure out whether he’d traveled prior to getting sick.

The two versions of the COVID-19 vaccine available in the United States appear to still be effective at stopping these South African and British variants of the disease, experts say, although there’s some concern about how other vaccines will react to the new versions. On Sunday, South African health officials decided to pause distribution of an AstraZeneca vaccine after a study showed it was significantly less effective at preventing illness from the South African coronavirus mutation.

The Houston Health Department on Monday announced 1,005 new coronavirus cases and nine new deaths from COVID-19 within the city, putting Houston’s cumulative case cound\t at 163,438 and the city’s total death tally at 1,838 since the start of the pandemic.

Before sharing more details on the city’s vaccine rollout, Turner expressed his condolences for the family of Republican U.S. Congressman Ron Wright of Arlington, who died Sunday from COVID-19. The 67-year-old is the first sitting Congressman to die from the coronavirus.

Turner then explained that for the second straight week, the Houston Health Department is “continuing to prioritize the vaccine supply on those who are most likely to die if they get COVID-19.” That means most of the city’s vaccine doses will be going to community health providers who primarily serve poor Houstonians of color and to elderly Houstonians who called-in to sign up for the Area Agency on Aging’s vaccine waitlist.

The city health department isn’t making new vaccine appointments available to the public this week and is relying on its community health partners and the waitlist of elderly residents to fill vaccination slots for the time being. The waitlist is still full; the city shut it down about a week ago after 70,000 calls came in to register in under four days’ time. 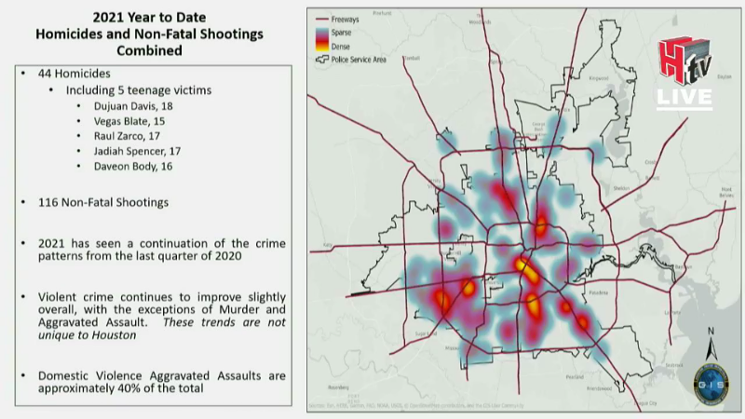 2021 has seen plenty of shootings so far in the greater Houston area.
Screenshot
Turner and Acevedo also discussed the rising amount of Houston-area violent crime during the pandemic. They shared statistics which show that since this time last year, 44 Houstonians have been murdered — including five teenagers — and that 116 non-fatal shootings have occurred.

While the pandemic continues, Turner said that reducing violent crime is “the number one priority for this administration” right now.

Acevedo alleged that part of why we’ve seen so many shootings in recent months is because Houston police officers haven’t been arresting people for misdemeanor offenses as frequently as they did before the pandemic, although he didn’t explain why that was the case.

No matter the reason for HPD’s less strict crime enforcement, Acevedo said those days are officially over now, and that HPD cops will be out in force trying to charge Houstonians with more misdemeanor offenses with the hopes that they’ll be dissuaded from committing more serious crimes in the future.

Acevedo said that over the weekend, a multi-agency team of HPD, Harris County Sheriff’s Office and Texas Department of Public Safety officers “made about 15 arrests, made over 100 citations and impounded cars” from city residents taking part in dangerous “street takeovers” across the city, and that people can expect more of that in the future.

Turner and Acevedo both expressed frustration at how many Houstonians that have been allowed to leave jail on no-cost personal recognizance bonds ultimately go on to commit other crimes, a trend they hope can be reversed by updating the rules on the local bail system. Past bail reform efforts have focused on keeping poor Houstonians out of jails, but Turner and Acevedo appear to be echoing claims from Abbott and other state Republicans that the state criminal justice system should be doing more to keep more people behind bars.

“I don’t think anyone needs to be put in jail because they can’t afford it because they are poor,” Turner said. “[But] I do think it’s a different situation if you’re talking about people, for example, who have been out on a PR bond who have committed felony crimes, and they’ve been out for say the second, third, fourth or fifth time. I put those in a different category.”
KEEP THE HOUSTON PRESS FREE... Since we started the Houston Press, it has been defined as the free, independent voice of Houston, and we'd like to keep it that way. With local media under siege, it's more important than ever for us to rally support behind funding our local journalism. You can help by participating in our "I Support" program, allowing us to keep offering readers access to our incisive coverage of local news, food and culture with no paywalls.
Make a one-time donation today for as little as $1.