Six Reasons Lovie Smith Will Be Fired After 2022 Season 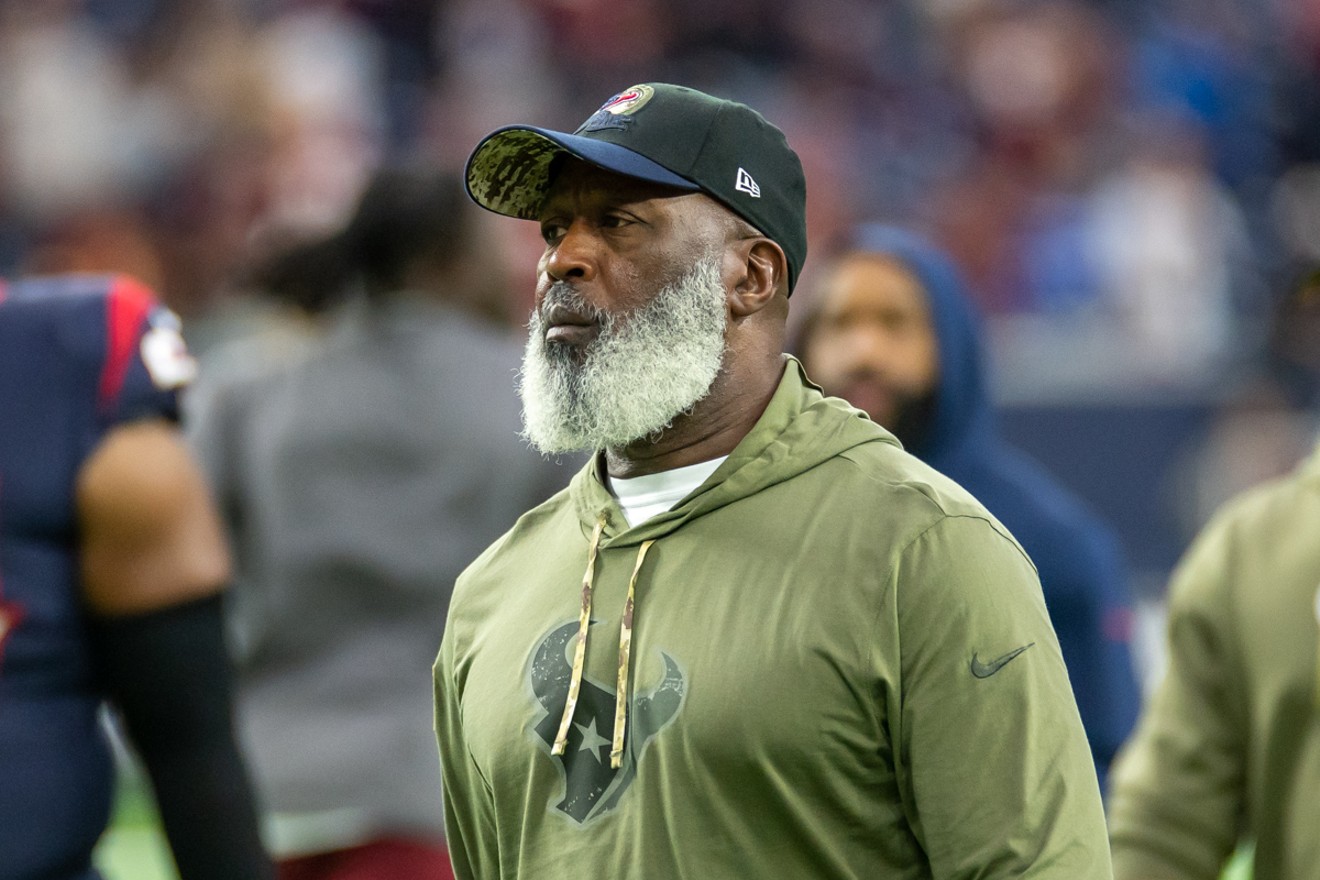 If Lovie Smith gets fired, there will be plenty of reasons why. Photo by Eric Sauseda
My expectations for the Texans in 2022 were not stratospheric or anything. I thought they would win slightly more than the 4.5 wins that Las Vegas forecasted for them, but not much more. In short, I thought it would be a quintessential rebuilding year for a team that was sporting a dozen or so rookies (some of them, very high end rookies) on the roster.

While I expected some losing this season, the last thing I thought I would be talking about in Week 15 was replacing Lovie Smith. I mean, MAYBE we would be discussing it, perhaps, but not talking about it like the "no brainer" it's become. Around the league, Houston is viewed as a sure fire job opening this offseason, and a much more attractive one than it's been these last two offseasons, where no-namer David Culley and retread Lovie Smith ended up with the job.

The list of prime candidates will be hashed out eventually in this space, probably multiple times, but for now, if you feel the need for me to justify the way I (and thousands of others) feel about Lovie Smith's lack of job security, here are six big, largely unexpected reasons that Lovie Smith should be gone at the end of the season:

6. The decision to take the tie versus the Colts in Week 1
We got a good feel right out of the gates in 2022 as to what the Lovie Smith Experience might entail. In a game that the Texans led for most of the afternoon in Week 1, and a game in which the Colts came raring back to send it to overtime, the Texans had a chance to make a statement that would have resonated BIG with Texan fans. In a tie game, with under 30 seconds left in overtime, 4th and 3 at midfield, Smith chose to punt and accept a tie, instead of going for a win. Had he known how few chances he'd have to actually win a game this season, I'm guessing he'd like a "do over" on a move whose message fans interpreted as a lack of guts.

5. Horrific stretch of run defense
Honestly, the whole season has been a clinic in how NOT to defend the run, much of it due to just a serious lack of talent in the front seven on defense. However, the Texans' defense has had some particularly disturbing performances. There was the Week 3 loss to the Bears, where the Texans allowed over 280 yards of rushing to a backup running back and an offense in which the QB (Justin Fields) was zero threat to throw the football. There was Josh Jacobs of the Raiders going for over 140 yards, most of it in the second half of the loss in Vegas. There was Derrick Henry notching his fifth straight 200 yard game against the Texans in Week 8. Saquon Barkley got himself a nice day with over 150 yards in Week 10. In short, the Texans have probably made more fantasy stars this season than any other defense in the league.

4. Horrific stretch of first half offense
On the defensive side, the Texans routinely give up 170 yards or more rushing. Meanwhile, that sieve of a defense is counterbalanced with a Texans offense that is the worst in team history, which is truly saying something. In particular, the Texans had a run after the bye week (a juncture on the calendar where you get to spend extra time improving, theoretically) where they amassed 36, 86, 5, and 32 yards in four of the five games between Week 8 and Week 12. I don't care how bad the talent level is on the offensive side, numbers like that get coaches whacked.

3. The handling of the Week 12 QB switch
So after the horrific performance against the Redskins in Week 11, in which Davis Mills generated FIVE yards of offense in the first half, Lovie Smith made the decision to switch to Kyle Allen as his starting quarterback. Of course, Lovie couldn't even do that correctly, as he spent his Monday and Wednesday press conferences being coy and dodgy about his decision at quarterback. What made it worse is that word had already leaked to the national media that Allen would start, and reporters were tweeting just that as Lovie Smith was trying to convince us he hadn't made a decision or something.

2. Goal line follies in back to back "circle the date" games
This is more specific to offensive coordinator Pep Hamilton, but he is Lovie Smith's guy, so Smith is going to catch the heat for these decisions, too. What I'm referring to is back to back weeks, in Week 13 against Cleveland and this past Sunday against Dallas, where Hamilton's play calling and personnel usage were crucial to the losing outcomes of both games. Versus the Browns, with a chance to take an early 10-0 lead with 1st and goal at the five yard line, Hamilton ran four plays in which leading rusher (and best player) Dameon Pierce was a spectator. The Texans did not score. On Sunday, with Pierce injured and the Texans trying to score a touchdown that would have sealed the game, Hamilton decided to make 32 year old Rex Burkhead the focal point of the series. The Texans did not score. Malpractice.

1. Rex Burkhead
This brings us to the final reason Lovie Smith (and Pep Hamilton, for that matter) will be gone — as demonstrated by the aforementioned series of downs on Sunday, they have, at times, had a weird fetish for veteran running back Rex Burkhead, a fetish that must be stamped out in the offseason with either therapy,  firing Lovie and Pep, or the outright release of one Rex Burkhead. In Week 1, for some reason, they thought it would be a good idea to give Burkhead 19 touches and Pierce 12 touches. It was not a good idea. In Week 4, they decided on a crucial 4th and 1 to telegraph a pass play to Burkhead and not even have Pierce in the game. That ended in a sack. Then there was Sunday against Dallas, where Burkhead, who had carried the ball just twice since before Halloween, was given the ball twice on a series of downs that could have won the game. Again, malpractice.

These are the types of things that, in the real world, get people fired from everyday jobs, and come January, they are likely getting Lovie Smith fired from this job.