A Sampling of Lt. Gov. Dan Patrick's Most Outlandish Statements In Recent Memory 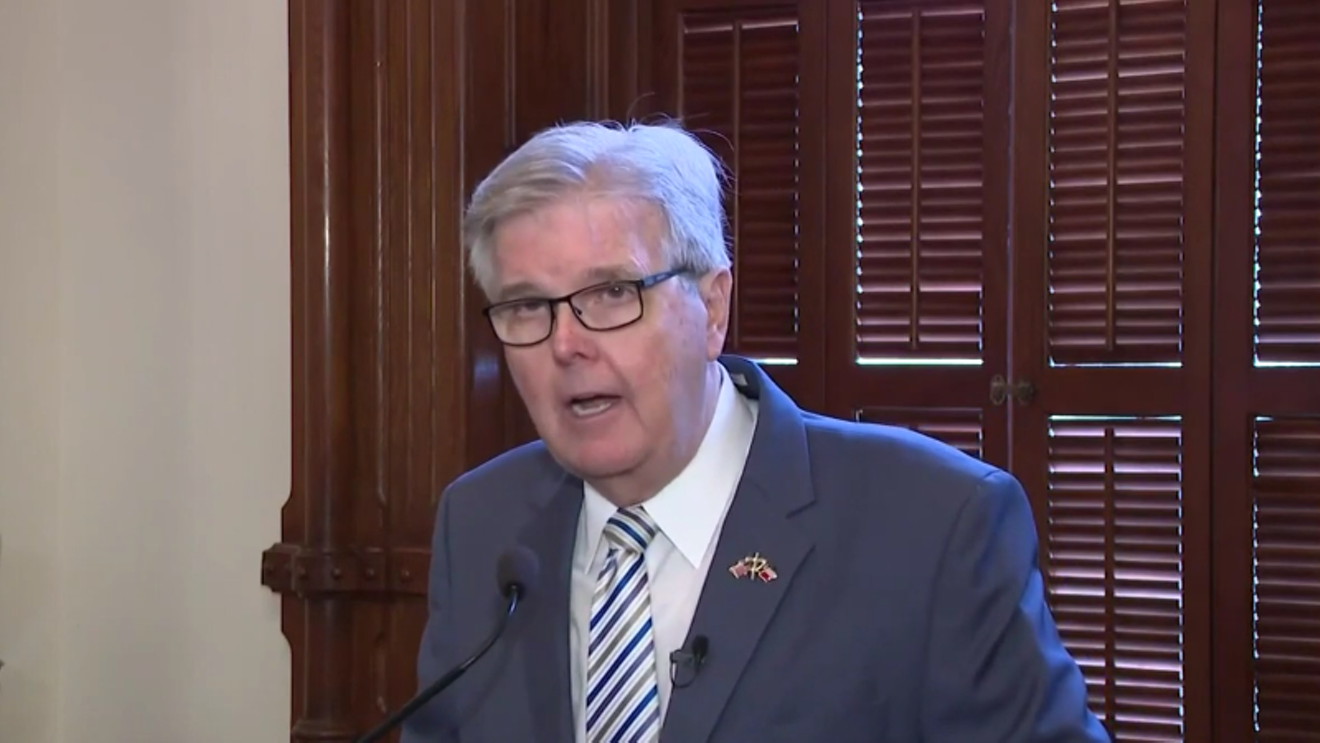 Lt. Gov. Dan Patrick sure has a knack for hyperbole. Screenshot
Former Baltimoreon and current Texas Republican Lt. Gov. Dan Patrick has spent most of the past two decades clawing his way up the Lone Star State’s political power structure. Patrick parlayed his Houston conservative talk radio career into a 12-year stint as a state senator before he stole former Lt. Gov. David Dewhurst’s job by beating him in the Republican primary and winning the gig in the 2014 general election, and has bent the Texas Senate to his will ever since.

Now considered one of the most powerful politicians in Austin, Patrick stands tall as a true master of the art of hyperbole, able to gas up his fellow Republicans in laudatory fashion as if he was advocating for their inclusion on a Lone Star Mount Rushmore just as skillfully as he can make his Democratic foe of the day sound like the antichrist incarnate.

Inspired by his recent declaration that Gov. Greg Abbott’s decision to start building a Texas border wall with the change he’s collecting from everyday immigration hawks across the country as “the most consequential” thing any state executive has ever done, the Houston Press has compiled four of our favorite Patrick quotes in recent years, presented below in no particular order.

Not only did the controversial measure fail to make it to Abbott’s desk during the regular legislative session that year, but it died once more in that summer’s special session thanks to pushback from the business community and moderate Republican (remember those?) Joe Straus, then-Speaker of the Texas House.

After having put so much muscle into the bathroom bill fight, surely Patrick would have been eager to revive the battle when the next session in 2019 rolled around. But Patrick made no such effort. Quite the contrary; Even though he’d lost on the issue, twice and in public fashion both times, Patrick came out declaring victory.

“When you win the battle, you don’t have to fight the battle again. I think it’s been settled, and I think we’ve won,” Patrick said in January 2019.

“Sometimes a bill doesn’t pass, but you win on the issue,” Patrick elaborated, despite showing no evidence that any public entities had made any changes to their bathroom use policies to fend off the supposed scourge of transgender Texans using the toilets of their choice.

During a televised chat in April 2019 with one of his favorite conservative agitators, Fox News’ Laura Ingraham, Patrick used his latest rant about the alleged crisis of crime on the United States-Mexico border to hold U.S. House Speaker Nancy Pelosi personally responsible for the plight of women being trafficked by Mexican drug cartels.

“It’s almost treasonous what she’s doing — selling out this country,” Patrick said, which while plenty incendiary wasn’t quite enough to rise above the fray of typical chastisements from Republicans toward Democrats who are somehow never doing enough when it comes to the border.

As if he could hear the sounds of millions of Fox viewers mouthing in unison “Really Dan, that’s all you’ve got?” Patrick tripled-down.

“I view her as nothing more than a slaveholder,” Patrick fumed, “because she’s in charge of not helping these people, these poor young girls.”

Never mind that Pelosi is just one government official, albeit an extremely powerful one, or that there are multiple federal agencies tasked with rooting out such crime at the border, or that at that time they were working under the pleasure of noted border hawk and then-President Donald “They’re Not Sending Their Best“ Trump.

Live and Let (Your Grandma) Die

Just a few weeks into the coronavirus pandemic on March 23, 2020, Patrick once again graced the airwaves of Fox News, this time to chat with the network’s far-right poster boy Tucker Carlson.

He wasn’t there to warn Carlson’s millions of viewers of how best to protect themselves from the deadly virus floating through the air, but to argue that temporarily shutting down or limiting the occupancy of certain state businesses would be tantamount to ruining the economy for generations to come.

Patrick, then a few days shy of 70, claimed that this pesky coronavirus was really only dangerous for older folks like him (which experts knew at the time was blatantly false), and that if it were up to him, older folks at high risk of dying from COVID-19 should just buck-up and take pride that their possible deaths could be the price needed to keep the United States economy wide open for business.

“No one reached out to me and said, ‘As a senior citizen, are you willing to take a chance on your survival in exchange for keeping the America that America loves for its children and grandchildren?’ And if that is the exchange, I’m all in,” Patrick said, who then claimed “I’m not living in fear of COVID-19, I’m living in fear of what’s happening to this country,”

“My message is let’s get back to work. Let’s get back to living. Let’s be smart about it. And those of us who are 70-plus, we’ll take care of ourselves. But don’t sacrifice the country.”

About nine months later and tens of thousands of Texan coronavirus deaths later, Patrick implemented new rules for his Texas Senate ahead of the upcoming legislative session to drastically limit the number of members of the media who could be physically present to watch the Senate’s proceedings and mandated that no one could set foot in the Senate chambers without proof of a negative COVID-19 test from that day. So much for taking care of ourselves.

Earlier this month, Abbott amplified his attacks on President Joe Biden’s handling of immigration policy (with a potential eye on the presidency in 2024, many Abbott-watchers have speculated) by announcing that his administration would pick up where Trump left off and start building a border wall all along the Texas border with Mexico.

Despite the lack of a plan on where the wall will be, the as-of-yet-to-be-hired project manager who will ultimately have to create said plan, the relatively measly down payment of $250 million shifted from other parts of the state budget through Abbott’s “disaster” powers, and the fact that Abbott has resorted to begging concerned citizens to donate however much cash they can muster to support the wall (collecting their emails and phone numbers for future solicitations of another sort, in all likelihood), Patrick couldn’t be more enthused about the whole endeavor.

“Governor, thank you for your leadership,” Patrick said after Abbott signed multiple official documents to get the process started at his border wall pep rally.

“I believe that this is the most consequential letter and document and resolution signed by any governor in modern history,” Patrick said, arguing that “This document will go down as one of the most important documents in the history of Texas.”

Patrick then joined Abbott in claiming “We are being invaded” by the wave of immigrants entering Texas illegally.

Abbott has clearly tied his political future to presenting himself as the God-fearing, conservative, law-and-order Yin to Biden’s allegedly border-openinig, socialist Yang. If he’s successful in doing so, it’d mean at least one more term as governor for Abbott, and potentially a spot in the White House if enough right-wing patriots across the country take note and take a liking to Abbott ahead of the 2024 presidential election.

If Abbott does somehow parlay his hard-right turn in recent years into the presidency, he’d definitely have his lieutenant governor to thank in part for cheering him on. While the two men have never been close friends by any indication, Patrick would surely be willing to boost his fellow Republican’s profile in the near term.

After all, an Abbott ascendance would leave a pretty attractive opening in the Governor’s Mansion for the state’s sitting second-in-command.
KEEP THE HOUSTON PRESS FREE... Since we started the Houston Press, it has been defined as the free, independent voice of Houston, and we'd like to keep it that way. With local media under siege, it's more important than ever for us to rally support behind funding our local journalism. You can help by participating in our "I Support" program, allowing us to keep offering readers access to our incisive coverage of local news, food and culture with no paywalls.
Make a one-time donation today for as little as $1.