Harris County Judge Lina Hidalgo calls what's happening with voting "the vestiges of the Jim Crow era." Screenshot
Harris County Judge Lina Hidalgo, echoing the rising chorus of complaints about what is happening with the state's new applications for a ballot-by-mail thanks to the passage of Senate Bill 1 in the last legislative session, said Wednesday that "The attacks we're seeing on voting are but a thinly veiled attempt and successful really effort at suppressing the vote."

Speaking at a 12:30 p.m. press conference, Hidalgo was flanked by County Commissioner Rodney Ellis and Harris County Isabel Longoria. Because of new requirements seeking more information on the mail-in ballot applications, about 35 percent of the requests to vote by mail in the March primaries have been flagged for rejection so far, Hidalgo said. "We are rejecting around seven times more mail ballots than we did before in a similar midterm cycle."

Longoria said most of the applications that her office is having to reject until it can secure more information fall into two camps: they don't include sensitive information like social security numbers or the "identifying number" applicants use is different than the one they used to file their original voter registration.

"They give us their driver's license number but when they registered they used their social security number," Longoria said as an example.
click to enlarge 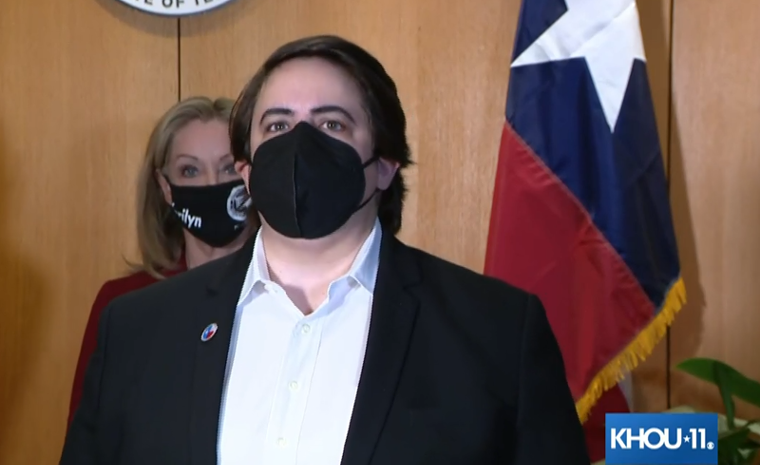 Isabel Longoria, Harris County Elections Administrator
Screenshot
Seniors especially are urged by a number of sources not to share personal information like social security numbers, Hidalgo said. So they may be hesitant to include that on the ballot-by-mail application form when they have never had to do that before, she said.

Adding to the confusion are reports from the League of Women Voters, a non-partisan group, that the Texas Secretary of State's Office has said it has a limited number of the new forms to hand out to it and other organizations seeking to get out the vote.

"The sad part is that the confusion itself is suppression. Right now there are so many reports about ballots being rejected, about what information you should and should not submit, " the county judge said.

Hidalgo began her press conference by mentioning that Houston Mayor Sylvester Turner and other U.S. mayors were in Washington Wednesday to urge the federal government to do something about what they see as limiting voter rights.

Texas is one of only a handful of states that does not allow online mail-in ballot application registration or online voter registration. The Legislature also banned 24-hour voting and drive-through voting used by Harris County in past elections.

Republican senators and representatives led the call for the changes in the last session saying they were essential for voter integrity. But Democratic officials repeatedly pointed out there has been no widespread election fraud anywhere in Texas, or as Hidalgo put it Wednesday "This is very much a solution in search of a problem."

Although voters have a deadline of February 14 by which time they need to have applied for a mail-in ballot, Hidalgo urged anyone to do it sooner, given that there may be questions about what they've filled out. She also stressed the need for applicants to include their contact information on the applications so the county can reach them more quickly if there are any questions.
KEEP THE HOUSTON PRESS FREE... Since we started the Houston Press, it has been defined as the free, independent voice of Houston, and we'd like to keep it that way. With local media under siege, it's more important than ever for us to rally support behind funding our local journalism. You can help by participating in our "I Support" program, allowing us to keep offering readers access to our incisive coverage of local news, food and culture with no paywalls.
Make a one-time donation today for as little as $1.