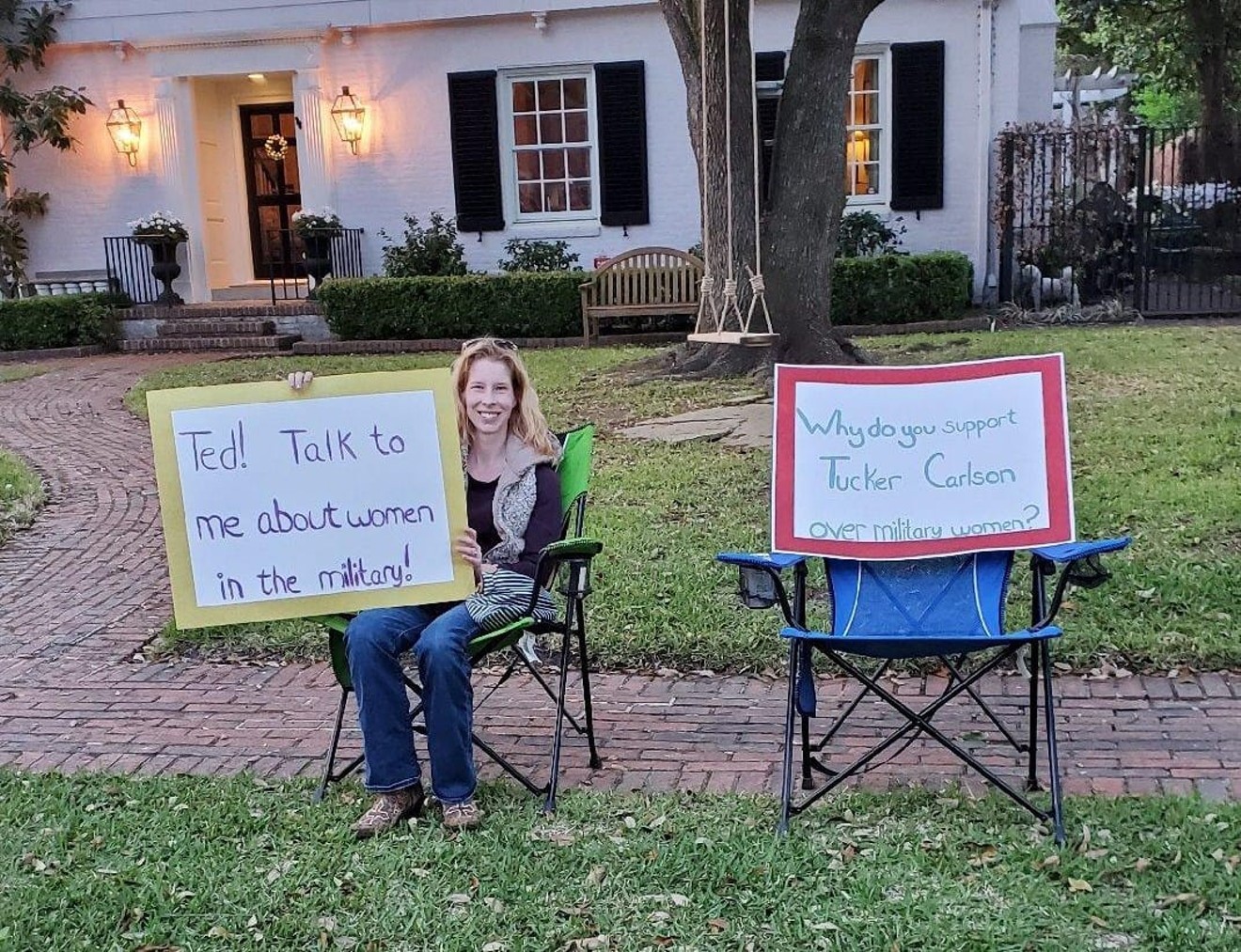 Diana Sims wants to talk to Ted Cruz. Photo by Nicholas Schulte
Since March 19, Diana Sims has been sitting outside of Senator Ted Cruz’s house with signs that read “Ted Talk to Me About Women in the Military” and “Why Do You Support Tucker Carlson Over Military Women?” The reason is both heartbreaking and because it involves Ted Cruz, deeply stupid.

Here’s the background, and apologies because it is going to take a bit to explain. Earlier in March, Fox News pundit Tucker Carlson ran a piece on his show in which he ridiculed the United States military for designing flight suits for pregnant service members. He also threw in some bigoted asides because he is, as John Oliver recently put it, “the most prominent vessel in America for white supremacist talking points.”

“While China’s military becomes more masculine as it's assembled the world’s largest navy, our military, as Joe Biden says, needs to become more feminine — whatever feminine means anymore since men and women no longer exist,” Carlson said in his piece. “The bottom line is it’s out of control and the Pentagon is going along with it. Again, this is a mockery of the U.S. military and its core mission, which is winning wars.”

The segment was roundly denounced by the military establishment, including Rear Admiral John Kirby, Assistant to the Secretary of Defense for Public Affairs speaking for the Pentagon. The U.S. armed forces have made great strides in the years since we investigated poor treatment of pregnant veterans. Seeing proper safety accommodations made for pregnant airmen is further proof that the military is moving forward with the diversity of their members in mind.

However, Cruz apparently thought that the military’s response to Carlson’s bigoted nonsense was mean. He went to the head of the U.S. Marine Corp to “put a stop to” them trying to “intimidate” Carlson.

“I am deeply troubled that the commitments you made, and the military’s broader obligation to avoid political endorsements and controversy, are being systematically undermined for the sake of leftwing ideology and political expediency,” he said in a letter to Defense Secretary Lloyd Austin. “The last week has witnessed the Pentagon mobilize systemic, public attacks against television host Tucker Carlson.”

Already under fire for fleeing the state for Cancun during the catastrophic winter storm as well as literally promoting the Big Lie of a stolen election even as insurrectionists stormed the U.S. Capitol, this is the latest in Cruz’s embarrassing moments for 2021. Enter 35-year-old retired Marine Corporal Diana Sims, who took offense at Cruz’s priorities.

“It was 17 degrees in my house, and his priority is Tucker Carlson?” she says. “Tucker Carlson doesn’t live here. I’m your constituent. I don’t feel like being a pawn. I don’t want you to use me in a culture war It’s going to hurt us. New people coming into the service hear this and we’ll have to fight these battles all over again. This is stuff we’ve been asking about for 20 years.”

Sims, who served in the military photography division alongside both pregnant and trans marines, usually begins her vigil outside Cruz’s home in the afternoon. She’s careful to stow her signs whenever she sees Cruz’s children, but has received some dirty looks from Heidi Cruz. Constables told her she could not bring beer to her watch, and now she packs only soda and snacks as she sits on the public sidewalk. She says Cruz has not acknowledged her presence, but she has no plans to leave.

“I’m prepared for the hot weather,” she says.

Response to her presence in the upscale River Oaks neighborhood has been mixed, but Sims feels she is reaching people. Republicans have been responsive to her explanation of Cruz’s anti-military actions. Her favorite interaction was with an older conservative couple whose granddaughter is a midshipman at the Naval Academy. The young woman wanted a picture of Sims to present to her women’s group.

“They couldn’t believe a Republican would treat their granddaughter like this,” she says.

Sims is upbeat and chipper about her vigil, but the trollish nature of the activity hides some real pain. Cruz’s denouncement of proper gear for women and pregnant service members is part of a long tradition of marginalization in the military. That fact hit home for Sims after a close friend of hers was killed in a helicopter crash in Nepal as it was on its way to help victims of the 2015 earthquake. When Sim received her memorial killed-in-action bracelet, it didn’t fit because it was not sized for women.

“She was my size,” says Sims. “We traded gear because in photography sometimes you have to go quick, and nothing is clean. I thought, ‘if this doesn’t fit me, it wouldn’t fit her either.’ Women in the military are sometimes so invisible. She died helping people, and they don’t have her in mind when they make things like this.”

As her protest outside Cruz’s home goes on, Sims has mentioned on social media that she may seek to run against Cruz when he is up for re-election in 2024. In the meantime, she just wants to speak with him about his bizarre and hurtful decision to side with a television pundit over the military trying to accommodate its members safely and with dignity.

“I want to ask Ted Cruz if we should be mocked,” she says. “What if your daughters wanted to go into the Air Force Academy? How would you feel if they thought she didn’t have the same to contribute?”

Sims says interested parties can email her at diana8504@gmail.com.
KEEP THE HOUSTON PRESS FREE... Since we started the Houston Press, it has been defined as the free, independent voice of Houston, and we'd like to keep it that way. With local media under siege, it's more important than ever for us to rally support behind funding our local journalism. You can help by participating in our "I Support" program, allowing us to keep offering readers access to our incisive coverage of local news, food and culture with no paywalls.
Make a one-time donation today for as little as $1.