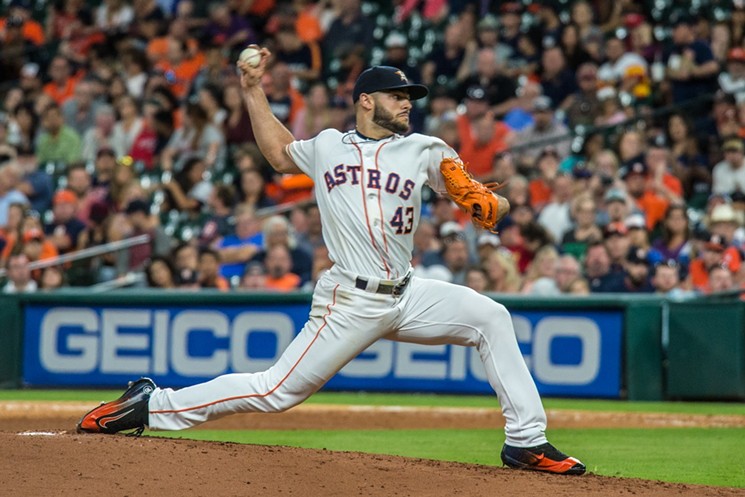 Lance McCullers, Jr. underwent Tommy John surgery and will miss the entire 2019 season.
Photo by Jack Gorman
The Astros announced on Tuesday that staring pitcher Lance McCullers, Jr. would miss the entire 2019 season after undergoing Tommy John surgery on his right elbow. The team said they expect the 25-year-old to make a full recovery.

McCullers started 22 games for the Astros in 2018. He finished the season coming out of the bullpen and stayed there for the playoffs. He had a 2.84 ERA in his 25 regular season appearances and allowed just one run in three innings in the postseason.

While McCullers had been relegated to the team's fifth starter spot for most of the year, he still has one of the better curve balls in the game. Still, he has never started more than 22 games in any season and has struggled with injuries since joining the ball club in 2015. Regardless, the Astros want him back and healthy when his recovery is over.

They might, however, need him sooner. After extending a qualifying offer to pitcher Dallas Keuchel, it is widely assumed he will leave the Astros. Only five players (including former Astro, Colby Rasmus) have accepted a qualifying offer. Keuchel can undoubtedly do better than the one-year deal and the Astros would receive compensatory draft picks if the lefty were to move on.

Then there's Charlie Morton. It is expected the Astros will attempt to negotiate a new deal with CFM during the offseason, but Morton has hinted at retirement despite an outstanding season and suggestions toward the end of the year he might want to return for at least one more year.

With the return of Justin Verlander and Gerrit Cole, the Astros should still have one of the best one-two combinations in baseball. If the can get Morton back, and he continues to pitch well, that will help. And they have plenty of young arms like fireballer Josh James, lefty Framber Valdez and minor league prospect Forest Whitley.

The Astros should be active in the hot stove league this off-season seeking depth, a consistent bat for the middle of the lineup and catching help (depending on whether or not they re-sign Martin Maldonado). But, they may be on the market for an arm or two. Fortunately, they have loads of prospects and more than enough options, but losing any reliable pitcher makes Jeff Lunhow's job that much more difficult.
KEEP THE HOUSTON PRESS FREE... Since we started the Houston Press, it has been defined as the free, independent voice of Houston, and we'd like to keep it that way. With local media under siege, it's more important than ever for us to rally support behind funding our local journalism. You can help by participating in our "I Support" program, allowing us to keep offering readers access to our incisive coverage of local news, food and culture with no paywalls.
Make a one-time donation today for as little as $1.