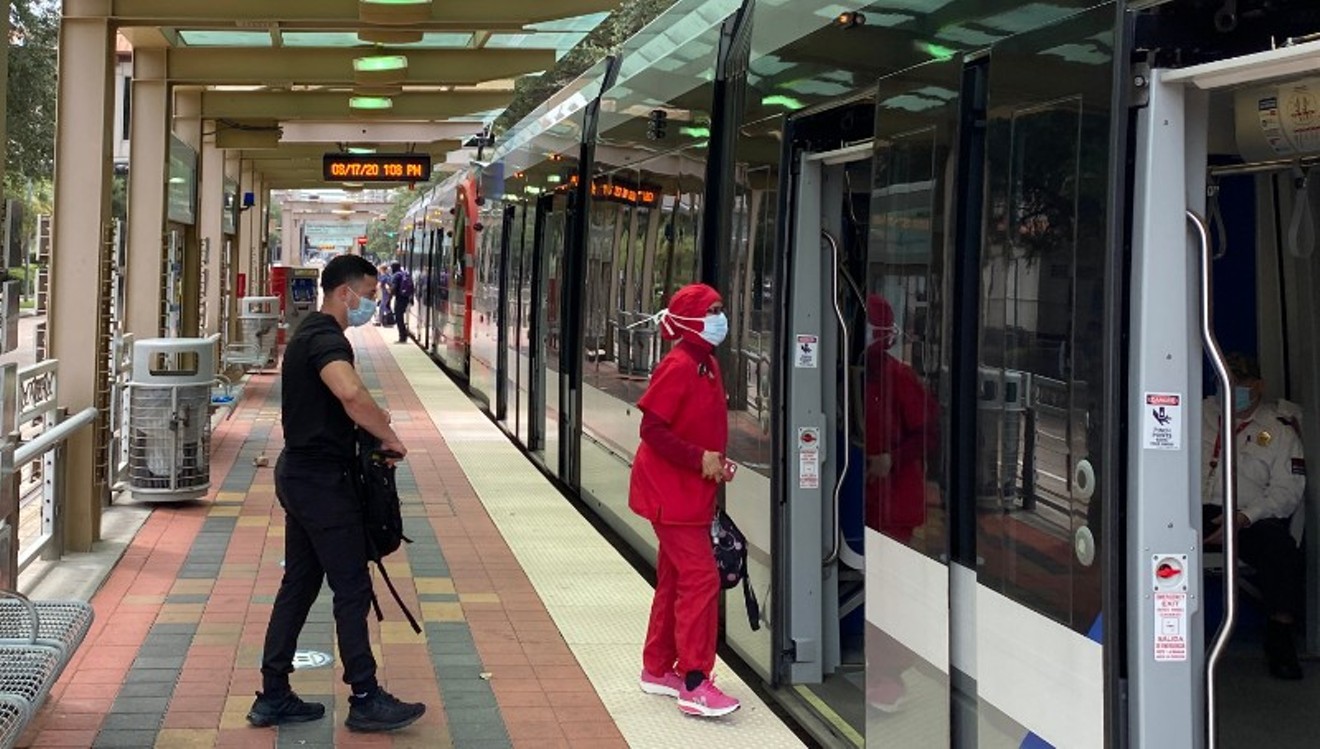 METRO passengers board the light rail in the Medical Center with face masks on, which METRO has required since June 25. Photo by Schaefer Edwards

Even in a highway-riddled, car-crazy town like the Bayou City, public transportation still plays a pivotal role in getting thousands of Houstonians to work, the grocery store, healthcare appointments and everywhere in between. And it’ll take more than a global pandemic to stop the more than 1,300 vehicles that together make up Houston's public transit system.

Thanks to COVID-19, the Metropolitan Transit Authority of Harris County has had to make big adjustments to the way it operates its fleet of buses and trains that crisscross the greater Houston area. The major switch-up at the top of the list? Telling people that maybe they shouldn’t take the bus so often after all.

“Since March, we’ve been encouraging folks to only take essential trips,” said Tracy Jackson, METRO’s media director. Jackson said the intent behind this recommendation was to “help accommodate essential workers who’ve got to get to their essential jobs, and also make sure that we have appropriate social distancing.”

To achieve the level of social distancing recommended by public health experts, METRO has been operating each of its vehicles at 50 percent capacity as of March 16, according to a press release. Since then, brightly colored blue and yellow plastic signs have been zip-tied to every other seat on each METRO bus and train in town, signalling that those seats are to be left open in order to provide as much distance as possible between riders while still allowing enough space to transport Houstonians who are still relying on public transport.

In order to make it easier for essential workers and those facing financial hardship to travel in the early days of COVID-19, METRO stopped collecting ride fares on March 23. Fares were reinstated on July 12. “Fare revenue is only about 10 percent of our overall budget,” Jackson said, before explaining that federal CARES Act funding has been a major source of support for METRO during the current crisis.

Jackson said that METRO is currently providing around 120,000 rides per weekday, adding that over the course of the pandemic, METRO’s total cumulative ridership numbers are “about half” of what they were for the same time period last year across all METRO services. This majority of this decline coincided with when much of the greater Houston area was under stay home orders in late March and April. 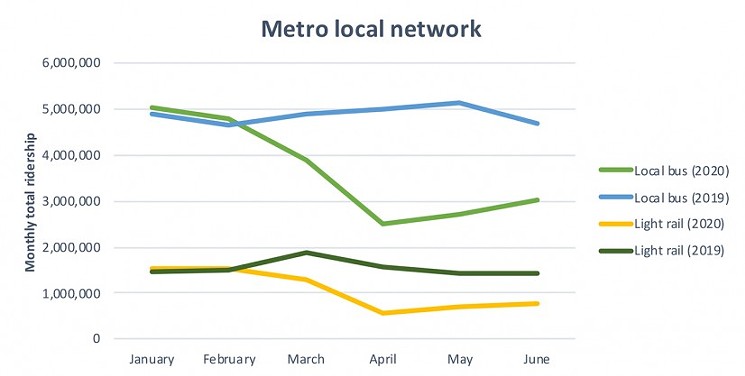 METRO ridership on light rail and local buses has fallen substantially during the pandemic according to METRO's public ridership reports.
Graphic created by Rice University's Kinder Institute for Urban Research

According to METRO’s public monthly ridership reports, the first big dip in trips happened in March, when total ridership numbers between METRO’s local buses, light rail and park and ride commuter network fell 25 percent compared to March 2019. The next month, total METRO ridership was down from 7,277,922 rides in April 2019 to only 3,078,548 rides in April 2020, a 58 percent decrease.

Since large parts of the local economy reopened in May, there’s been a slight increase overall METRO traffic — the year over year drop in rides fell to 53 percent in May and to 43 percent for June — but so far, riders haven’t flocked back to public transit at pre-pandemic levels even though Houston hasn’t been under a stay home order for the past few months, Jackson said. 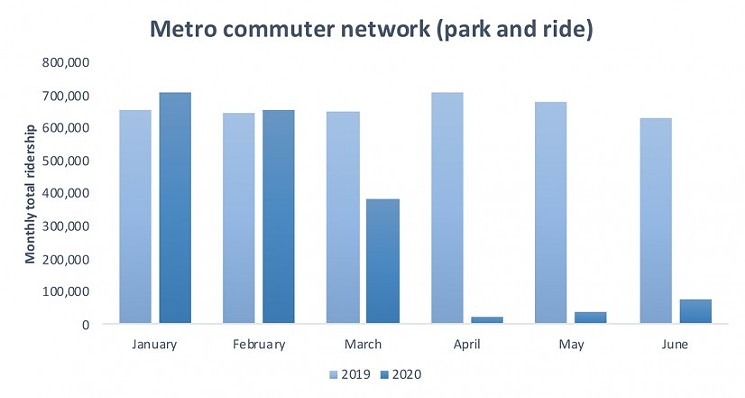 An analysis of METRO’s public ridership reports by Rice University’s Kinder Institute for Urban Research shows that the steepest sustained decline in METRO usage has been seen in the agency’s park and ride commuter service. Commuter network ridership in April 2020 was down 97 percent from April 2019, and in June — the most recent month for which rider data is available — year over year commuter ridership was still down 87 percent.

As public health experts started to recommend the widespread use of face masks to prevent the spread of COVID-19, METRO started encouraging riders to wear masks when using public transit in mid-April, and METRO employees were given masks to hand out to customers for free. On June 25, METRO’s board voted to make that recommendation a requirement. As of mid-August, METRO still requires that all riders wear face masks.

A large number of METRO employees are front line workers interacting with the public daily, so it’s no surprise that many have been infected with the coronavirus. Jackson said that over the course of the pandemic, 180 METRO employees out of the agency’s 4,200 person workforce have tested positive for COVID-19. That positive case count includes 84 bus operators and 83 employees who “did not have positions where they had any contact with the public,” Jackson said. In addition, 51 METRO contractors have tested positive for COVID-19, who worked in a mix of public-facing and internal roles.

In addition to telling riders they have to wear face masks, METRO has limited capacity on all its vehicles to 50 percent to comply with social distancing guidelines.
Photo by Schaefer Edwards
One METRO bus operator who tested positive for COVID-19 died at home on June 24, Jackson said. She explained that while METRO knew this driver had contracted COVID-19, it’s unclear whether or not this employee's death was caused by the disease. “We don’t know, because we’ve never received a death certificate, if it was a result of COVID or some other illness,” said Jackson.

When METRO finds a positive case within its ranks, it attempts to get the word out to the public through online press releases, text message alerts to any rider who has signed up for alerts for any bus route and through its social media accounts. “Our goal is to be as transparent as possible so that people know what’s going on with our organization,” Jackson said. If a bus or light rail operator tests positive, an alert is sent out through those channels that reveals what specific routes the operator was working on most recently and for what time period they were last on the job.

METRO is trying to catch potential COVID-19 cases on its team by conducting temperature checks when employees clock-in for work each day. If an employee has a fever, METRO asks them if they’re experiencing any other COVID-19 symptoms, and if METRO suspects that the employee may have COVID-19 based on their answers, that person is then sent to get tested with their own healthcare provider.

Jackson said that any METRO employee who tests positive isn’t allowed back on the job until that person tests negative for COVID-19, and any other employees who may have come into contact with an employee who tested positive are sent home to quarantine for 14 days based on CDC guidelines.

The latest safety measures METRO has implemented to try and stop COVID-19 from spreading through its service are the installation of plastic barriers separating vehicle operators from passengers on all METRO buses and trains and the addition of hand sanitizer stations on all of its vehicles currently running.

While no one in METRO’s ranks could have anticipated having to deal with a crisis like the COVID-19 pandemic, Jackson said METRO is doing its best to keep its essential service rolling.

“We are still providing an essential service to the folks in our community,” she said. “Whether it’s to get to the medical center, whether it’s to get to the grocery store, whether it’s to get to healthcare or to the pharmacy, we are still providing a substantial amount of rides for folks who rely on our service to get to those areas.”
KEEP THE HOUSTON PRESS FREE... Since we started the Houston Press, it has been defined as the free, independent voice of Houston, and we'd like to keep it that way. With local media under siege, it's more important than ever for us to rally support behind funding our local journalism. You can help by participating in our "I Support" program, allowing us to keep offering readers access to our incisive coverage of local news, food and culture with no paywalls.
Make a one-time donation today for as little as $1.