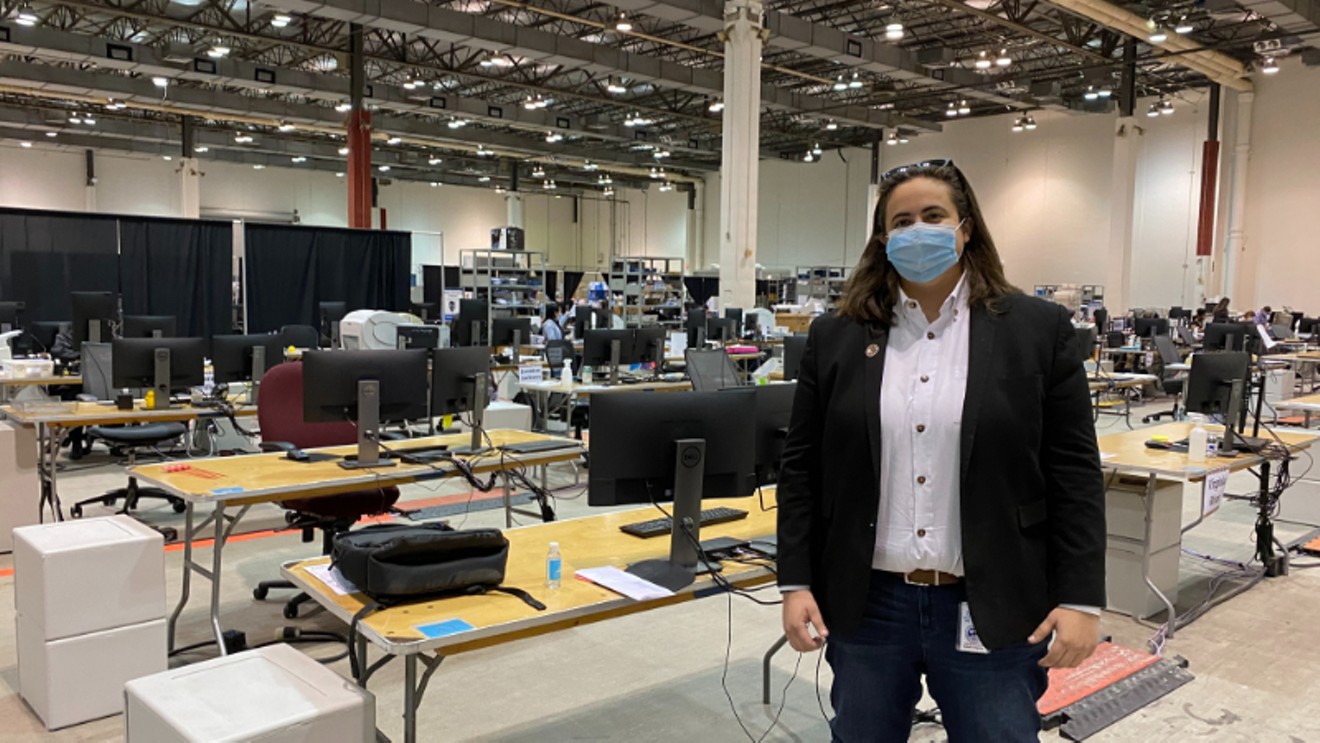 Isabel Longoria, Harris County's first Elections Administrator, is getting ready for her new gig at NRG Arena, the county's election HQ. Photo by Schaefer Edwards
Every presidential election is obviously A Very Big Deal, but this year’s contest in Harris County made way more headlines than usual, due in large part to outgoing County Clerk Chris Hollins’s tireless efforts to make it easier and safer to vote during the pandemic and the deluge of Republican lawsuits trying to preserve the pre-COVID status quo that followed, allegedly out of fears of voter fraud.

Hollins wasn’t going it alone — he had Isabel Longoria in his corner as the County’s Special Advisor on Voting Rights & Access, who was by his side working to increase voting accessibility from June through Election Day.

Longoria worked with Hollins to triple the number of early voting locations and to push through innovations such as adding a day of 24-hour early voting and implementing the drive-thru voting system used by more than 127,000 county residents during early voting alone. And she was right there in the trenches through the constant fights with Gov. Greg Abbott, State Attorney General Ken Paxton and other right-wing adversaries who put up roadblock after roadblock to their plans.

On the Friday before Election Day, Longoria was tapped to be the first Harris County Elections Administrator, a new appointed nonpartisan job that Commissioners Court created in the summer to absorb the election-running duties of the County Clerk and the voter registration responsibilities of the County Tax Assessor.

“If you could start any government organization from scratch, what would you do? That is an opportunity that doesn’t come around for decades, and I think that’s the biggest opportunity here is we get to start from scratch,” Longoria said.

“Isabel’s experience and knowledge made her the clear choice to lead the voter registration and elections process for Harris County,” said Hollins in a statement announcing Longoria’s appointment last month, which came after a nationwide search to fill the role landed on the 32-year-old Houston native.

“My pitch is I’m the hometown kid...I think what I brought and what I will bring to the Elections Administration Office is I know exactly what it means to vote at Juergens Hall versus Moody Park,” Longoria said. “I know the differences in those communities. I know what they need voter registration-wise, I know what they need voting-wise. That’s what I want to do, is bring that spirit of someone who knows and loves Houston so deeply to every part of voting.”

“I’m getting really worked up,” she said, catching herself with a chuckle.

A daughter of immigrant parents (her father is Mexican, her mother French), Longoria had plenty of civic-minded role models on both sides of the family to look up to as a kid.

Her great grandfather on her dad’s side was Speaker of the House in the Mexican state of Tamaulipas, and her maternal grandmother was on the City Council in Fort-Mardyk, France. But what really sparked Longoria’s desire to serve her community was a less official but even more symbolic pair of positions held by her French grandparents.

“One of their greatest memories is being Mr. and Mrs. Claus every year,” she said.

“It’s that kind of spirit, right? Of just civic purpose and civic engagement. It’s not about an elected office,” Longoria continued. “It’s literally about, how can you bring joy to your community?”

Longoria graduated from St. Agnes Academy before heading off to Trinity University in San Antonio to study sociology. She then took I-35 north to Austin for a two-year stint at UT Austin’s LBJ School of Public Affairs to get her master’s degree.

No stranger to local politics, Longoria has worked in a number of policy roles for Democratic former state Rep. Jessica Farrar and Democratic U.S. Rep Sylvia Garcia back when the lawmaker was still a state Senator. For nearly four years, Longoria was a community organizer as the Associate State Director for Advocacy & Outreach for the American Association of Retired Persons. She also served on Houston Mayor Sylvester Turner’s LGBTQ Advisory Board and the board of the League of Women Voters.

In 2019 Longoria ran for Houston City Council, losing out to District H Councilmember Karla Cisneros by just 16 votes in the December runoff election.

Looking for her next move, Longoria was interested in the Harris County Clerk gig after Diane Trautman abruptly retired from the role just months after being elected due to health concerns amid the pandemic. When Hollins was ultimately tapped to fill Trautman’s shoes through the November election, Longoria said he quickly reached out and recruited her to join his team.

“We came in on June 1, he got sworn in, he swore me in, we swore everyone else in and then we got to work,” Longoria said.

Even though she’s worked for Democrats through the years, Longoria said that doesn’t mean she’s taking a partisan approach to her new role as Elections Administrator.

“My background is progressive values, and progressive values are centered around creating equal access and innovation for everyone in the pursuit of civic engagement. And so I think that’s going to serve everyone,” Longoria said.

The pandemic was an obvious catalyst to rethink the way elections are run in Harris County, and Longoria said that even once the current crisis is over, she wants drive-thru voting to be a permanent addition to the voting process in the years ahead.

“I think it’s really hard when you provide something as popular, as easy, as safe and accessible as drive-thru voting to just make it a one time thing,” she said. “And for us, again, this is not some partisan or political thing, and it’s not just about focusing on a presidential election.”

Longoria hopes that new legislation will address some of the minutiae in the Texas Election Code that caused a last-minute shakeup to drive-thru voting on Election Day this year.

In the federal court hearing on November 2 over the legality of drive-thru voting, U.S. District Judge Andrew Hanen said that while the temporary tent structures Harris County set up for nine of the 10 drive-thru voting locations were good and dandy for early voting, he explained that his interpretation of the Texas Election Code was that voting on Election Day proper has to occur in “buildings” that are permanent.

Hanen wasn’t asked to halt drive-thru voting on Election Day in the lawsuit brought before him by local conservative provocateur Steve Hotze, but said in his ruling that if he had been, he would have ordered the nine tent drive-thrus to be shut down. This led Hollins to proactively close every drive-thru voting location on Election Day except for the one at Toyota Center’s parking garage — which is indisputably a permanent building — out of worry that future lawsuits might challenge the legality of drive-thru votes cast in tents.

Longoria said that state lawmakers are already at work on new yet-to-be-announced legislation that if passed during the 2021 session would get rid of or modify the narrow language around what type of structures people can vote in on Election Day.

“If the Legislature decides they want to clean that up for Election Day, great. We’d be happy to offer that service to all voters at all times,” she said.

As if this plague and lawsuit-stricken election season wasn’t exhausting enough, President Donald Trump has done his best over the past several days to cast doubt about the legitimacy of the election that saw a majority of the country decide to kick him out of the White House in favor of President-elect Joe Biden.

So far, most of Trump’s conspiratorial fear-mongering hasn’t been condemned by prominent Republicans in Texas, and Sen. Ted Cruz has even gone on Fox News to defend the president’s baseless claims to sow more distrust in the electoral process.

Longoria hopes her new office can help restore faith in that process within those county residents who have bought into these latest conspiracies, and thinks the best way she and her team can achieve that is to stick to the mantra of “tedious accuracy” in all that they do to make sure all future elections are carried out in a transparent, careful manner.

“We’re not here for the drama, we’re here to do our job,” Longoria said.

“We’re here to do our job exactly as the citizens of Harris County want it...I think that’s how you gain trust over time.”
KEEP THE HOUSTON PRESS FREE... Since we started the Houston Press, it has been defined as the free, independent voice of Houston, and we'd like to keep it that way. With local media under siege, it's more important than ever for us to rally support behind funding our local journalism. You can help by participating in our "I Support" program, allowing us to keep offering readers access to our incisive coverage of local news, food and culture with no paywalls.
Make a one-time donation today for as little as $1.