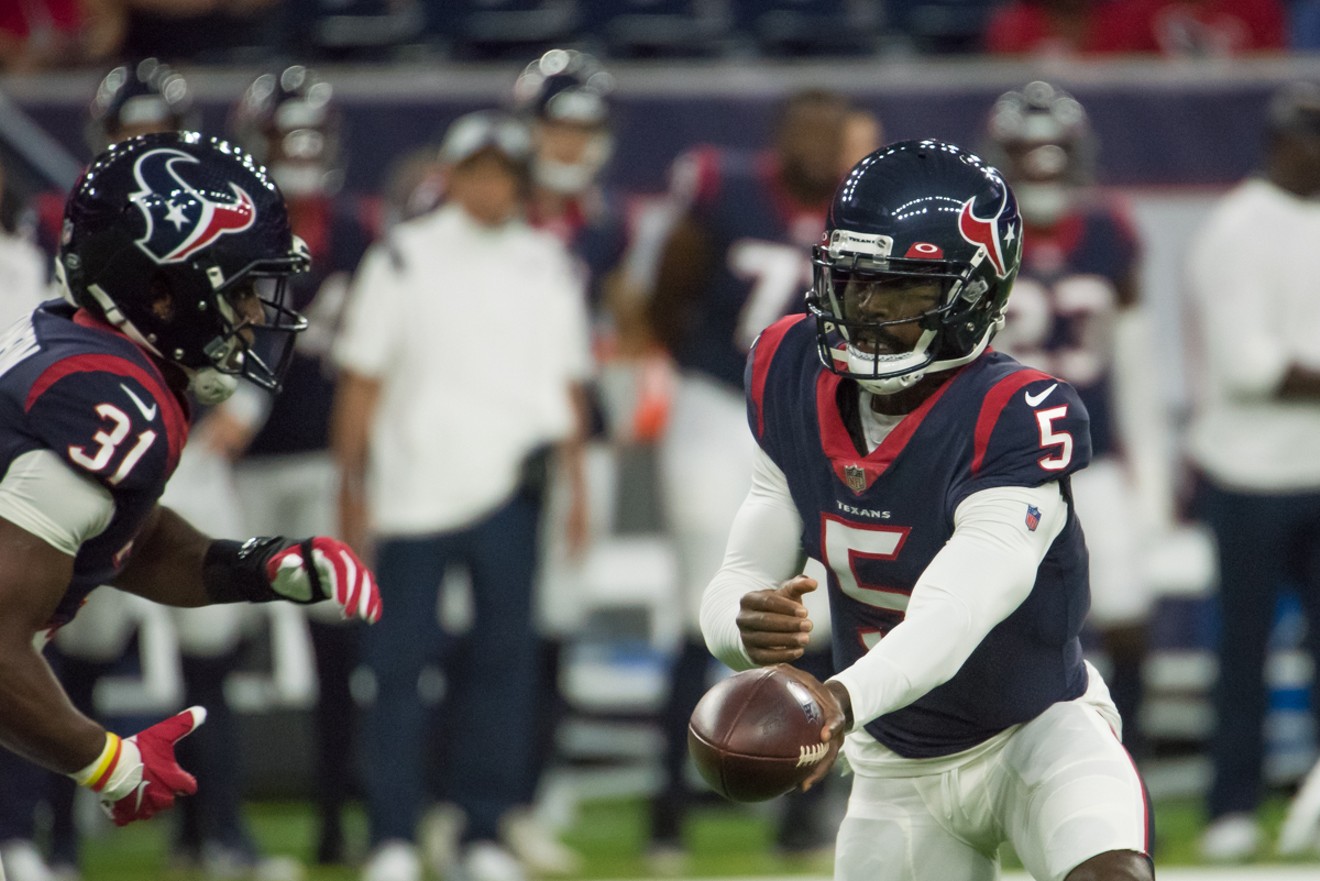 Tyrod Taylor will become the eighth Week 1 starting quarterback in Texans history. Photo by Jack Gorman
One of the toughest jobs in sports is trying to come up with a way to successfully market a losing franchise to a beleaguered fanbase. On a scale of one to ten, the Houston Texans' marketing department have had been tasked with a mission that has a difficulty level of about a 17 or so.

Right now, they are trying to somehow convince fans that they should invest their money and time in a team that (a) was decimated by Bill O'Brien's horrific football decisions, (b) has a franchise quarterback that wants out and is getting sued by 22 women,  (c) employs Jack Easterby, and (d) is widely expected to be the worst in the league.

Not an easy task, indeed, and the slogan they came up with to try to give people the right kind of chills when they clock "PURCHASE" to buy tickets —- by the way, seats still available as of Friday! — is "That Football Feeling."

While their "That Football Feeling" campaign has been built almost solely around tailgating and gamely pomp and circumstance (and hardly at all behind, you know, the actual football team), I'd be remiss not to point out the ACTUAL football feeling that longtime fans have right now. It's a feeling that's completely foreign to any fan of the team over the last decade or so.

Since 2010, every bad season (We'll call anything six wins or worse a "bad season") has come unexpectedly. In 2010, the Texans went 6-10, but were expected to make the playoffs for the first time in franchise history going into the season. In 2013, they went 2-14, and started the season as among the favorites to win the Super Bowl. In 2017, they went 4-12, but came into that season having gone 9-7 the previous year, and they had added Deshaun Watson. Finally, in 2020, I don't know that we expected greatness, but we didn't expect 4-12.

For the first time in a LONG time, Texan fans have known for months ahead of the season to brace themselves for the worst — like literally, the WORST. The worst team in football. It's possible. I don't think they will be, but it is absolutely in play that they're picking first in the draft next April. For now, they have the team that picked first in the draft this PAST April, the Jacksonville Jaguars, coming to town on Sunday for the season opener.

Here are four things to watch for:

4. Welcome to the world, Trevor Lawrence
As No. 1 overall picks go, particularly quarterbacks drafted first overall, the Jags' Trevor Lawrence is widely thought to be a generational player, on par with Andrew Luck nearly a decade ago, and Peyton Manning over a decade before that. Lawrence had an up and down preseason, and it's rare that even transcendent rookies light the world on fire in their first games. On Sunday, the two things I would watch for are (a) what does new Texans defensive coordinator Lovie Smith do to make Lawrence uncomfortable, and (b) what Lawrence (and new head coach Urban Meyer) do to take advantage of a Texans secondary that will likely be the worst in football.

3. The David Culley Show
While on the Jacksonville side of things, this is the first NFL games for QB Trevor Lawrence and head coach Urban Meyer, this is also David Culley's first regular season game as a head coach. After having never risen higher than a position coach in the NFL, it will be fascinating to see what Culley's modus operandi is as a head coach. How aggressive will he be in high leverage situations, like 4th down and at the end of halves? How smoothly will the game day operation run, on the sideline and in making snap decisions on things like replay challenges? I'm most intrigued to see how Culley handles losing, because he's been about as positive a human being as you could encounter over the last few months, but this team is going to do a LOT of losing.

2. Tyrod Time
The one important guy who is actually bringing the most practical experience to his vocation on Sunday is Taylor, who gets yet another opportunity to take the reins on an NFL team for a season. The last two chances he's had — Cleveland in 2018, Los Angeles Chargers in 2020 — have seen him lose his starting spot in fairly short order, including after just one game in 2020 when a Chargers team doctor accidentally punctured Taylor's lung with a pain killing injection. I'm most anxious to see if there are playbook wrinkles that the Texans kept from unveiling in the preseason, wrinkles involving Taylor using his legs. Taylor's ability to avoid turnovers should help keep the Texans in games this year, or for as long as Taylor remains the starter before rookie QB Davis Mills gets his inevitable audition for the starter's role in 2022.

1. The NRG energy
For the first time in the history of the franchise, the Houston Texans will likely not play in front of a sold out stadium. While the economy during a pandemic was certainly a reason the season ticket wait list dwindled to all time lows, it was the decisions of upper management, along with the PR nightmare that has been the Jack Easterby Era, that has led to the team actually having to promote the availability of tickets to games. My guess is that good seats will remain available all season long, but Sunday should be a fascinating litmus test for where this team is with its fan base. How full will the stadium be, and do the fans even care enough to boo the team at this point?