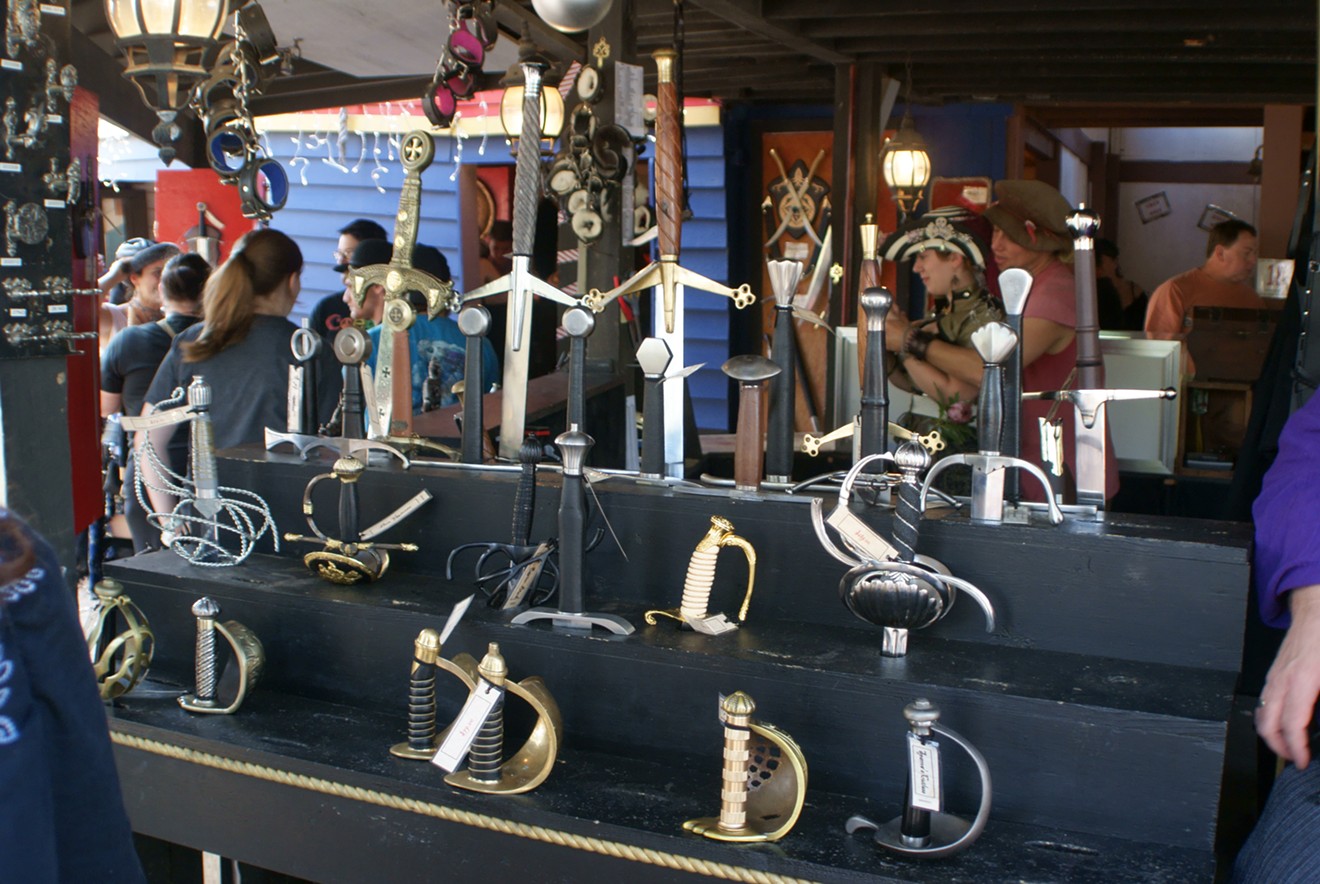 Apparently not everyone was happy working at the Texas Renaissance Festival. Photo by Mark Scott via Flickr
Recently, Texas Renaissance Festival owner George Coulam has been mentioned in a lawsuit filed in the Houston division of the Southern District of Texas, in which former employee Toni Ewton alleges he required her to peruse sugar daddy websites on his behalf. Though Coulam is not named as a defendant, his appearance in the lawsuit is not much of a surprise to people who have been in Coulam’s circle for years as the man has a very widely known reputation as a complete creep.

It isn’t even the first lawsuit of this kind to involve Coulam. In 2018, employee Eileen Pena alleged she was fired after she told Coulam that making her find women for him to date was inappropriate. TRF denied that Pena was ever employed as Coulam’s assistant. The case was mutually dismissed by both parties in June 19.

Coulam and TRF refused to comment for this story, but at least three former employees were willing to openly talk about the toxic environment and constant presence of Coulam’s inappropriate focus on his libido as head of the annual festival. According to them, he regularly made them party to his procurement.

Travis Bryant worked at the festival from 2015 – 2019 as the director of marketing and communications, and before that as the coordinator for school trips. His job also included putting together flyers and brochures to be handed out to women bragging of Coulam’s wealth and estate. Though these were careful not state this was a money-for-sex arrangement, Bryant says it was heavily implied. Coulam would also choose staff based on his desires.

“I know firsthand there are people George said should be put on cast in hopes of developing relationships,” says Bryant. “George would go out riding and pick out women he liked. Part of my job was to create marketing collateral material that he would hand out to women. I know for a fact that he would have various people of the staff to help him find dates through various websites aimed at wealthy men look for companionship.”

Another employee, a horticulturist who asked to remain nameless, claims that she was responsible for placing an ad in the Houston Press in February 2004 that was designed to find Coulam a local bride. Coulam handcrafted the ad himself by cutting and pasting the elements for the horticulturist to submit. It was titled “loving wife for loving husband,” and offered a $10,000 wedding gift as well as a $35,000 allowance to live with Coulam at his estate, Stargate Manor. The ad has become infamous in rennie circles, being passed back and forth across message boards. 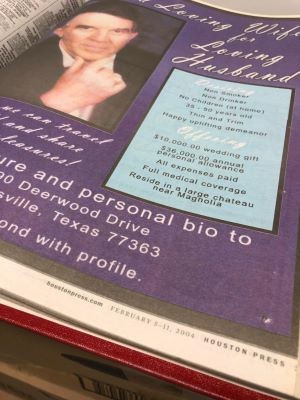 Looking for love.
Houston Press ad
The horticulturist says that the local ad was placed because Coulam’s search for a mail order bride from Thailand at the time was going poorly. She was also in charge of dealing with a doctor in Thailand for that particular transaction.

“I don’t know why this fell to me,” she says. “Maybe because I was the new guy. I had to contact a doctor and a village elder to translate for her family. The financial arrangement had already been made; it was around $35,000. He traveled to Thailand a lot and knew about kathoey (Thai trans women). I had to express to the doctor that it was important that this was not a surgically created vagina.”

In addition to the wives, Coulam also apparently requested escorts for festival events, another task that the horticulturist says that she was made part of.

“I was arranging his companionship,” she says. “He liked to have beautiful women on his arm. We had a budget for this, but we weren’t supposed to tell him we were hiring prostitutes. I knew a woman from New York and asked her if she’d like to make $1,500 a night to walk around in a costume. He would touch her all over in public. She said that back at his house he was vile and disgusting in ways she wouldn’t describe to me later. She wouldn’t even finish the festival that year.”

“Vile and disgusting” comes up a lot when discussing Coulam. One of his most famous actions is allegedly making employees do public weigh-ins, often commenting on how the heavier employees would never get laid and the way breasts would hang, according to the horticulturist. Bryant recalls a meeting where Coulam tried to convince the board to start selling expensive fruit juices by claiming they would improve male virility and erection hardness.

“Any other company, that would have been a harassment lawsuit,” he says.

The horticulturist had an awful time as Coulam’s employee. As a woman in a male-dominated industry, she thought she could deal with anything, but Coulam was “so far over the top, an onslaught of the senses.” She says he gave her a tour of Stargate Manor, making sure to point out his four-poster bed carved with phalluses and bestiality scenes. He would also ride around the grounds with her while wearing small shorts and adjust himself so that his penis would be exposed down his leg.

“He turned out to be much more than I could handle,” she says.

Hostile work environment exacerbated the problems around Coulam. Though TRF has a board, he is the majority shareholder and exerts a level of total control on those around him.

“You have to understand from a business standpoint how it is structured,” says Bryant. “The board is made up completely of people with a financial stake in the organization in that they own shops, mostly food vendors, that are a good chunk of their livelihood. At the same time, they are on a year to year contract that are renewed. If you have hundreds of thousands invested and you get a good return every year, but the person with the majority has the ability to not renew you...”

The crudeness trickled down from Coulam into the rest of the staff according to the horticulturist. Once her relationship with another woman became known, staff would express loudly in her hearing how violence against LGBT people was common in their families. Much of the toxic environment was perpetuated by some of Coulam’s female employees.

“They were so deeply entrenched in George’s culture that they were eating each other alive and destroying anyone who came to work there,” she says. “Perhaps it’s a survival technique. They do it to survive. George was good at dangling carrots. Many of the women who had been there for years were of generous build, and they took so much of his abuse. If you confronted them about his abuse, people would bring up his epilepsy and the fact that they had been promised part of the festival in his will when he died. It was the anchor in the culture, that they dealt with it to get something from him.”

That culture is one of the primary reasons that more has not been said publicly about Coulam’s behavior. Despite it being common knowledge for years, few people are willing to come forward about it. It’s only in a post-#MeToo environment that former employees feel safe in expressing their grievances, but there is still a wall between rennies and “normal” folks. Jeremy Bulloch, who was a performer at TRF from 1995-2000, has heard many unsavory rumors about Coulam over the years but seen few consequences for the owner. No one seems to want to risk their position with the festival.

“Working at TRF is like working at WWE,” says Bulloch. “They count on people living the gig and wanting it since they were kids. That way they can treat them like shit and underpay them. Rennies will be all like, ‘I’d do this job for free!’ People who are out might be happy to talk, but people still inside are likely to clam up so as to not jeopardize their plans for next season.”

Now that the matter has started to move into the courts, “King George” might finally be seeing the end of his uncontested reign.
KEEP THE HOUSTON PRESS FREE... Since we started the Houston Press, it has been defined as the free, independent voice of Houston, and we'd like to keep it that way. With local media under siege, it's more important than ever for us to rally support behind funding our local journalism. You can help by participating in our "I Support" program, allowing us to keep offering readers access to our incisive coverage of local news, food and culture with no paywalls.
Make a one-time donation today for as little as $1.