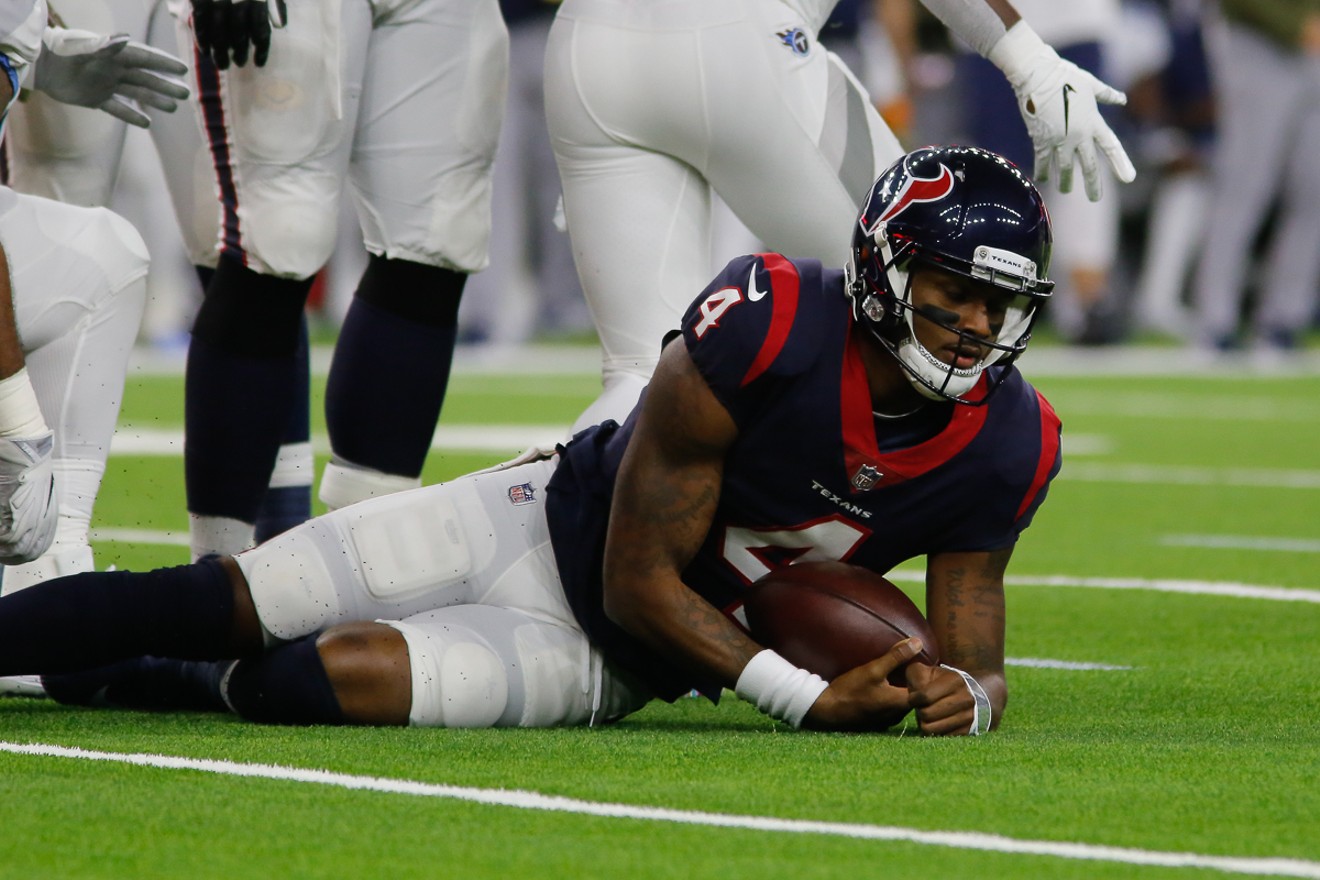 A new SI.com article reveals a few new items pertaining to Deshaun Watson's legal entanglements. Photo by Eric Sauseda
Over the last year and change, no team in sports has experienced more weirdness, with seemingly all of it detrimental, than the Houston Texans. Making Bill O'Brien the general manager of the team was weird. Virtually every decision made by O'Brien was weird (and bad). The whole Jack Easterby ethos has been weird. And to say that the Deshaun Watson legal situation has exposed some next level weirdness (and possibly criminal behavior) would be an understatement.

As publications go, SI.com (the website for longtime sports periodical Sports Illustrated) has benefitted the most from the bizarre state of the Texans, most notably with two monster, click-producing revelation pieces on the behind-the-scenes machinations of Easterby. On Friday, SI.com pointed their journalistic guns at a different (and for more obvious) target when they did a deep dive on Deshaun Watson, the allegations against him, and the shadows in which the massage therapy industry operates within the sports world.

Much of the piece was a rehash of several things that have been reported in other places over the last two months, perhaps viewed from different angles or perspectives. However, there were four very important revelations in this piece, as the Watson saga continues to roll on with no end in sight, at this point. Here are those items:

Deshaun's "reputation" in the massage community was burgeoning to where even the Texans' medical staff knew some things
The article indicates early on that Watson's less than stellar reputation in the massage community had been bubbling up significantly over the last year or so. Some of his alleged traits were fairly harmless, like booking appointments at the last minute or being a less than generous tipper. However, the bizarre and uncomfortable behavior outlined in the 22 lawsuits was becoming a big topic in the massage community. The article also mentions that a person with "close ties to the Texans" indicated that there at least one member of the Texans' medical staff was concerned that Watson was seeking out massage therapists on Instagram, perhaps due to the possible inconsistent medical treatment for the most prized football asset in the building. Considering 13 of Buzbee's 22 plaintiffs are not licensed massage therapists, from purely a medical standpoint, this is probably a valid concern from the Texans' staff.

Ten of Tony Buzbee’s clients have gone to the police with complaints
Of the various battlefronts Watson is fighting right now, the 22 civil lawsuits have gotten the most attention, and that is logical given the public way in which the attorneys have been jousting. However, the NFL's investigation is still ongoing, and is likely to result in some sort of punishment for Watson. Then there is the criminal side to this saga, in which it was reported in the SI.com piece that nearly half of Buzbee's clients have gone to police with their complaints. As of right now, there is no resolution on that front, but any sort of criminal charges for Watson would certainly be a game changer.

Ashley Solis had been in touch with Buzbee during the Texans' season, which torpedoes some whacky conspiracy theories
Originally, Buzbee had said that Ashley Solis (Plaintiff number one) had come to him in January 2021 with her allegations against Watson. As it turns out, she was actually in touch with Buzbee several months before that, and one massage therapist who was central to this piece (but not involved in any litigation, she was under the pseudonym "Susan" in the piece) was contacted about talking to one of Buzbee's associates prior to Week 16 of the NFL season (late December). This is important because there was rampant conspiracy theory speculation that the Texans themselves were behind the rise of these lawsuits, perhaps out of spite over Watson's wanting out of Houston. (Forget about how dumb it would be for them to torpedo the value of the one key asset that can help accelerate their rebuild. People are dumb.) This shows that the legal wheels had already begun turning back when Deshaun and the Texans were in good graces with each other, albeit during a dismal season.

Reportedly, Texans owner Cal McNair sent his attorney in to try to resolve things after the first couple weeks of lawsuits
Publicly, the Texans have done everything they can to distance themselves from this entire situation, leaning on canned statements about "allowing the legal process" to govern. In this piece, though, there was this:

About two weeks after the first suits against Watson were filed, a lawyer who said he was representing Texans owner Cal McNair did approach both attorneys, seeking to broker a mediation. A statement from the Texans organization, emailed by a team spokesperson, says, “Mr. McNair was aware that his personal attorney contacted both parties to suggest mediation. Mr. McNair has had no personal involvement in any of those discussions. The Houston Texans organization has not had any direct contact with either party.”


Obviously, any attempt to mediate was unsuccessful, but it would be fascinating to know, if Cal McNair did indeed send his attorney to make this attempt, whether the desire to get Watson traded before the draft (for multiple first round picks) was part of the motivation.