If he keeps the gig, Texas House Speaker Dade Phelan will likely lead an even more Republican House in 2023. Screenshot
If the new Texas House district maps unveiled by the Republican-led House Redistricting Committee Thursday are approved as expected, incumbent Republicans across the state would by and large be protected, likely solidifying the GOP’s grip on the House for the next decade.

That advantage would come at the expense of minority representation and left-leaning Texans, as even more House districts would be drawn to have mostly white voters and Trump supporters inhabiting them.

While the new proposed House maps would pit multiple current house members across the state against each other if they want to stay in office, none of them are from the Harris County delegation. It appears the only greater Houston area incumbents that might have to face-off against one another are state Reps. Jacey Jetton (R-Richmond) and Phil Stephenson (R-Wharton) in the newly drawn House District 26.

In a statement to the Texas Tribune, Stephenson’s office blamed Jetton for allegedly drawing Stephenson out of his current district, claiming that Jetton wasn’t “playing the nicest with this new map.”


In response, Jetton told the Tribune that while “there has been some confusion” about where Stephenson actually lives, Jetton was under the impression he lived in Wharton County, which is outside the newly-drawn House District 26. “So we are not actually paired in HD-26,” Jetton claimed.


Even though the 2020 U.S. Census showed that 95 percent of Texas’ population growth in the past decade was due to new Hispanic, Black and Asian residents, the number of House districts with a majority of white voters would increase under the House’s proposed plan, according to a Tribune analysis.

That same analysis also found the new maps would likely give Republicans an advantage in more districts, based on how voters living in the newly drawn districts cast their ballots in the 2020 election. Currently, 76 House districts voted for former President Donald Trump, while 74 voted for President Joe Biden. If the newly proposed maps are adopted, 86 House districts would have mostly Trump-supporting constituents, and 64 would have electorates that supported Biden. 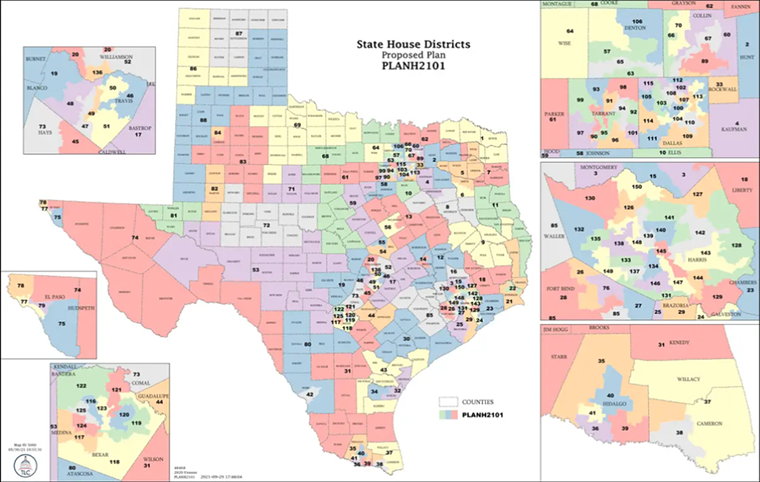 House Redistricting Committee Chair Todd Hunter (R-Corpus Christi) announced the first public hearing on the initial draft of the new House district map will take place at 9 a.m. Monday. Given GOP control of the House and the U.S. Supreme Court’s decision in 2015 to gut federal Voting Rights Act protections designed to prevent discrimination against minority groups, the maps aren’t likely to change much according to state politics experts, and will all but assuredly be approved by the whole Legislature and Gov. Greg Abbott in the weeks ahead.

“I am infuriated, but not surprised, to learn of this recent attack on Black and brown Texans,” Hinojosa wrote. “Republicans know that they cannot win fairly, so they are now using tactics and operatives who specialize in unfair redistricting practices.”


“I am infuriated, but not surprised, to learn of this recent attack on Black and brown Texans. Republicans know that they cannot win fairly, so they are now using tactics and operatives who specialize in unfair redistricting practices.” — Gilberto Hinojosa, Texas Democratic Party Chair

One operative Hinojosa was referring to is Adam Foltz, a Republican redistricting guru who played a controversial role in crafting Wisconsin's legislative maps in 2011. The Texas House Redistricting Committee hired Foltz earlier this summer, according to internal staffing documents obtained by the Tribune. A federal court ruling found that the Wisconsin maps Foltz helped draw unfairly discriminated against Hispanic voters, and criticized Foltz for leading a map-drawing effort under a “cloak of secrecy.”

“This is disgraceful and Texans will not tolerate this attempt to dull the voices of our largest and fastest-growing population in Texas,” Hinojosa wrote. “Our Latino voters are a powerful force in this state and this is just another way for Greg Abbott and Texas Republicans to silence those who do not look or vote the way they do.”

"It's a tale as old as time. As they have for decades, Texas Republicans continue to cling to their stranglehold over our state at the expense of Black, brown, and Asian Texans' freedom to vote and be represented in their government," Fischer said in a statement. "There is nothing equal or fair about Texans of color making up 95 percent of the population growth and still losing representation in Congress and in the Texas Legislature."
KEEP THE HOUSTON PRESS FREE... Since we started the Houston Press, it has been defined as the free, independent voice of Houston, and we'd like to keep it that way. With local media under siege, it's more important than ever for us to rally support behind funding our local journalism. You can help by participating in our "I Support" program, allowing us to keep offering readers access to our incisive coverage of local news, food and culture with no paywalls.
Make a one-time donation today for as little as $1.