Republican Army vet and failed congressional candidate Wesley Hunt was given a gift by the state GOP. Screenshot

When the GOP Texas Senate on Monday unveiled its proposed new district maps for Texas’ seats in the U.S. House of Representatives, the likely impact on greater Houston’s slate of congressmen and women was pretty clear. Local red districts would get redder and blue districts would get bluer under the new plan, meaning incumbent Republican House Reps. Dan Crenshaw and Troy Nehls and Democrats Al Green, Sheila Jackson Lee and Sylvia Garcia would likely face easy paths to reelection in 2022.

The district makeup for U.S. Rep Lizzie Fletcher (D-Houston) was also made more solidly Democratic, but in a way that some expect could lead to a tougher March primary for the moderate Democrat since her new electorate would include far more left-leaning voters of color.

Meanwhile, Fletcher’s old 2020 Republican foe Wesley Hunt was gifted one of the two new U.S. House seats granted to Texas based on the state’s population growth according to 2020 U.S. Census data. And despite the fact that most of that population growth came from Hispanic Texans, neither of the two new proposed congressional districts would be majority Hispanic.

Before the state Senate’s new proposed congressional map was revealed, many Democrats wondered if Republicans would try to gerrymander Fletcher out of office. The moderate Houston Democrat infuriated Texas Republicans when she pulled off an upset in her historically red district in 2018 by beating longtime GOP Rep. John Culberson, and in 2020, Fletcher fended off her well-funded challenger Hunt, a Black Republican Army veteran whom both state and national conservatives view as a rising star in the party — if he can get into Congress, that is.

But instead of redrawing Fletcher’s district to rope in more Republicans and give Hunt a fighting chance at taking her down in a rematch, the Texas Senate redistricting committee carved out chunks of several existing Republican districts in western Harris County to create District 38, one of Texas’ two new congressional seats. As soon as state political wonks got a look at the new 38th District, they could see Hunt’s name written all over it.

“They actually created the district for him. It’d be kind of rude for him not to run,” Mark Jones, a Rice University political scientist and expert on Texas politics, said to the Houston Press Tuesday morning.

About two hours later, Hunt confirmed that he would indeed politely accept the new seat in Congress that the state’s map drawers handed to him on a bright red platter.

“I am extremely proud to announce my intention to run for Congress in Texas’ new 38th Congressional District,” Hunt declared Tuesday. “Together with my family, my team, and with the support of patriots across the country and right here at home, we will complete the mission I first embarked on in 2019.” 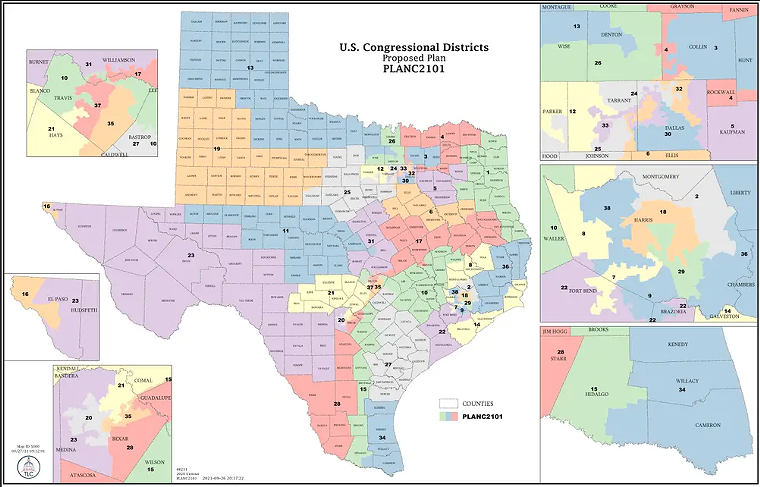 Texas' newly proposed Congressional maps, courtesy of the Texas Legislative Council.
Screenshot
The proposed new map would make Fletcher’s District 7 lean even more heavily Democratic, as it would pick up a diverse chunk of 200,000 left-leaning voters in Fort Bend County. The new 7th would shift from being a mostly white district to one of the most racially diverse districts in the country — its new makeup would be 30 percent Hispanic, 22 percent Asian and 21 percent Black, according to U.S. Census data.

That could mean an even easier path to reelection for Fletcher — if she doesn’t get primaried by a more progressive local Democrat of color seeking to capitalize on the district’s newfound diversity.

“For Lizzie Fletcher, her concern has now shifted from November to March,” Jones said.

District 7 as currently configured was set up well for someone like Fletcher, “a middle of the road Anglo Democrat,” according to Jones. “In fact, it was unlikely that anyone was even going to challenge her had the district maintained its old boundaries. Now, she runs the risk that an ambitious Democrat of color will challenge her in a district that now is a minority-majority district.”

As for whom that ambitious Democrat might be, Jones had a couple of hunches. “I think one person who’s probably thinking about that quite carefully right now would be state Rep. Gene Wu. And then potentially state Rep. Ron Reynolds.”

CD 7 has never been in better hands than under @Lizzie4Congress. I am grateful everyday for her calm leadership and willingness to help with our issues (and for unseating Culberson).

My mission in life has always been to turn TEXAS BLUE and take back the Texas Legislature. https://t.co/EDIbqU895L


In addition to the new District 38 in Harris County, the proposed congressional map includes a new bright blue district in traditionally liberal Austin. Jones said the choice by the state’s Republican map drawers to make one of Texas’ new districts solidly Democratic instead of drawing two new GOP seats was a symbol that Texas Republicans are most concerned about protecting their own incumbents rather than running up the score against Democrats in every single way possible. “This is [still] hyper gerrymandered, but Republicans struck a mid-balance in that they didn’t go wholesale aggressive,” Jones argued.

Nehls and Crenshaw’s districts were made even more solidly Republican, but for Crenshaw’s District 2, Jones thinks that decision wasn’t necessarily made with the clearly ambitious Crenshaw in mind.

“While Crenshaw likely could have continued to win his past district, there’s a high probability he’s going to run for the U.S. Senate or some other statewide office,” Jones said, “so therefore, that’s a seat where it’s now safe for whoever succeeds Crenshaw in that position as a Republican.”

One group that’s furious about the proposed new maps is the League of United Latin American Citizens. The Hispanic advocacy group’s leader Domingo Garcia said Monday he was furious that the newly drawn maps didn’t include any new Hispanic-majority districts, calling the new congressional maps “a travesty of justice and a violation of the United States Constitution.”

“The largest growth in Texas between 2010 and 2020 was Hispanics, who added to the population boom in the state. Yet, today’s map all but assures that anyone except a Latino gets a new seat in Congress,” Garcia argued. “Those responsible made sure to pack Latino voters into districts with Blacks and dilute us everywhere else in one of the most bizarre examples of gerrymandering we have ever witnessed.”

“The largest growth in Texas between 2010 and 2020 was Hispanics, who added to the population boom in the state. Yet, today’s map all but assures that anyone except a Latino gets a new seat in Congress." — Domingo Garcia, National President of the League of United Latin American Citizens

“Since the 1970s, LULAC has challenged redistricting every ten years in court, and we have always won. If Senators are not going to do the right thing and address this glaring suppressing of our vote, we will go into federal court again to have our voice and our votes respected,” said Garcia.

Jones said he knew there would be legal challenges against the new maps for alleged discrimination against minority voters, but said they’re way less likely to be successful in blocking the maps from being adopted than previous legal fights against GOP-drawn maps in past redistricting years. That’s mostly thanks to the U.S. Supreme Court’s decision several years back to gut a key provision of the Voting Rights Act of 1965 that required states including Texas with histories of drawing legislative maps that unfairly disadvantaged voters of color to get those maps pre-approved by the federal government.

“Previously, the burden was on the state to demonstrate that the districts did not adversely affect the ability of underrepresented minorities to elect candidates of their choice. Now, the burden is on the plaintiffs to show that these districts have been drawn with that intent,” Jones said, which will be much more difficult to accomplish.

Before the federal preclearance rule around redistricting was killed by the Supreme Court, “previously, the process was without that approval, you could not use the maps, and therefore the courts would draw new maps,” Jones said. “Now, unless there’s an injunction — which is unlikely, at least looking at these maps — then these maps will be enforced until this case is resolved, which may be prior to the 2024 election or maybe the 2026 election. But certainly not before the 2022 election,” he said.

Jones also doesn’t expect prominent U.S. House Democrats from Texas to put up a huge fight against the maps behind the scenes. Other than Fletcher, Jones said the rest of them are probably feeling pretty good about their chances of winning in these new districts, both in the primaries and the general election.

“They’ll mouth the mantra of voter suppression and illegal gerrymandering, but in the end, they aren’t going to go out of their way to really block the whole thing,” Jones predicted. “They’re just going to let it play out in the courts.”

Even a court-ordered map reconfiguration years down the line likely wouldn’t dramatically alter the proposed districts if past mandated map redrawings in Texas are any indication, Jones said. “Even when they’re redrawn, it’s usually touch ups at the margins.”

When asked about what Texans who are upset about the newly proposed congressional districts could do to fight back before they’re ultimately approved by the full Legislature and Gov. Greg Abbott as expected, Jones only had one recommendation: find a time machine.

“Go back to the summer and fall of 2020 and vote to get the Democrats a majority in the Texas House,” Jones said. “Absent that, there’s really nothing you can do at this time. It’s over. The die is cast. The rules have been written."
KEEP THE HOUSTON PRESS FREE... Since we started the Houston Press, it has been defined as the free, independent voice of Houston, and we'd like to keep it that way. With local media under siege, it's more important than ever for us to rally support behind funding our local journalism. You can help by participating in our "I Support" program, allowing us to keep offering readers access to our incisive coverage of local news, food and culture with no paywalls.
Make a one-time donation today for as little as $1.