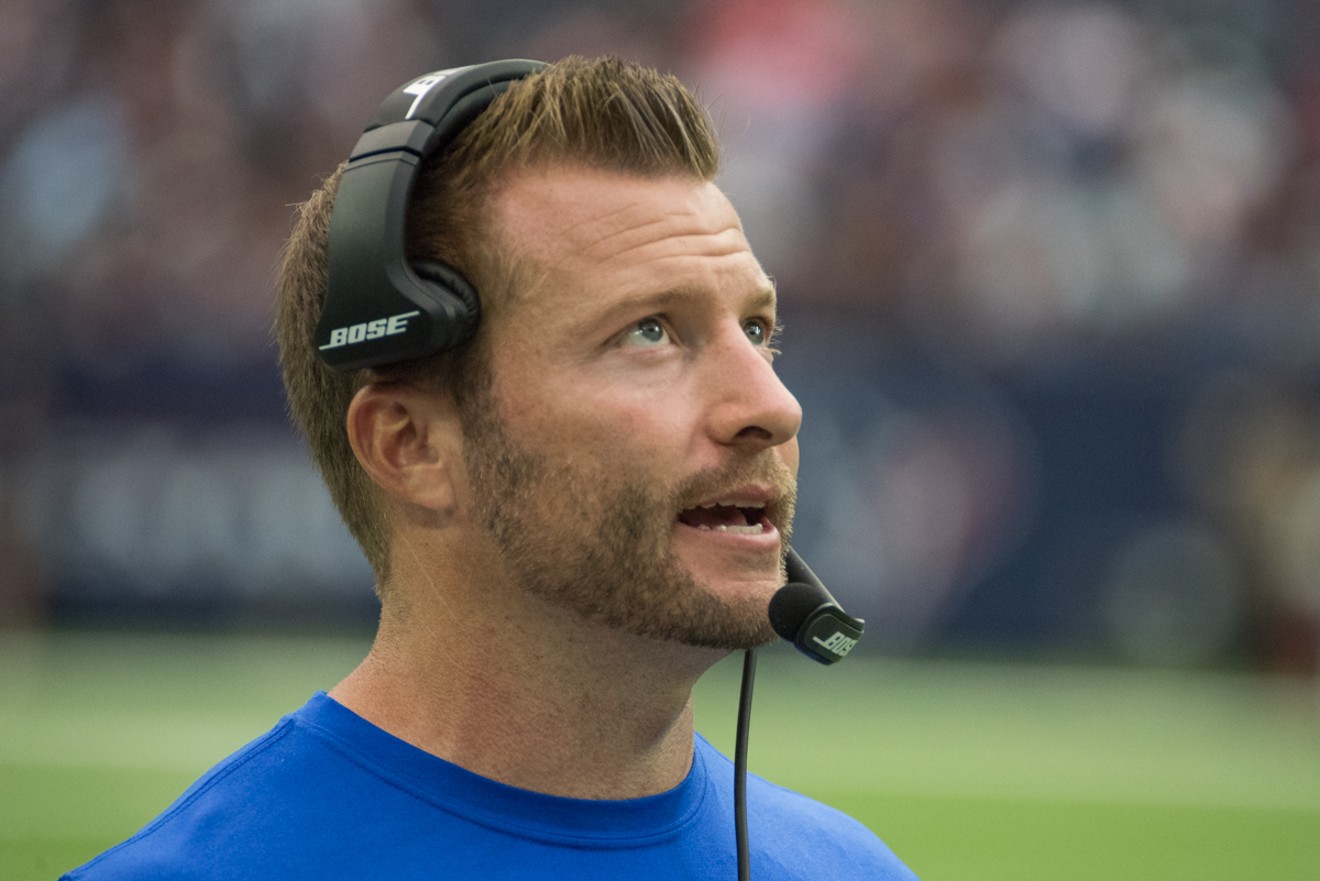 If the Texans hire the next Sean McVay, they will be very happy at NRG Stadium. Photo by Eric Sauseda
Monday represented the two week mark since the end of the 2021 NFL regular season, and we still had none of the eight head coaching vacancies filled. The Texans are one of the eight teams searching for their next leader, just one year after hiring David Culley. Friday will be the one year anniversary of David Culley getting hired for his first (and likely last) head coaching gig.

It is worth noting that, last year, the rest of the league had filled their head coaching vacancies several days before the Texans landed on Culley, with several of the jobs filled within a week of the season ending. This year, teams are moving much more methodically, and when you look at the numbers from head coaching searches from 2014 through 2019, perhaps we can see why teams are being so meticulous and cautious.

The numbers below tell a story, and that story is that it's really, REALLY hard to get a head coaching hire correct. Below, I've listed the 42 head coaching hires that took place collectively from 2014 through 2019, with the coaches who are still employed with the team that hired them in BOLD. I've also, just for fun, included links to report cards for each head coaching class from the day all the spots were fulfilled.

OK, let's break this down:

There are 50 percent more coaches in this timeframe that lasted two years or less than are still employed!
As you can see, the hit rate on finding a head coach who will be "the guy" for the next decade is precariously small. Just nine of the 42 head coaching hires during the six offseason window of 2014 through 2019 are still in their roles as head coach. All nine of them have made the postseason in their careers with their employers. Amazingly, and perhaps even more illustrative of how volatile the head coaching market can be, 14 of the 42 hires lasted two seasons or fewer in their head coaching jobs, and of those 14, four of them lasted just one season — Jim Tomsula, Chip Kelly, Steve Wilks, and Freddie Kitchens.

The head coaching classes from 2014, 2015, and 2016 are extinct.
Taking it a step further, you will not find a single head coach in the NFL right now, in January of 2022, that was hired in the 2014, 2015, or 2016 head caching hiring cycles. With Mike Zimmer's firing in Minnesota, all 21 of the head coaches that were brought in during those three offseasons are onto another gig. Of course, localizing this bullet point, one of those hires was the Texans' anointing Bill O'Brien their third ever head coach. Currently, O'Brien is the offensive coordinator for the University of Alabama after being fired by the Texans four games into the 2020 season.

Some of these sport card excerpts are hysterical in retrospect!
Numbers are one thing, but this exercise becomes way more entertaining when you dig back into the subjective report cards in which the experts opine on the quality of the hires. My favorite three misfires in this exercise are below:

CHIP KELLY to SF in 2016, courtesy of CBSSports.com


Go big or go home. The 49ers settled last season for Jim Tomsula after chasing off Jim Harbaugh. They didn’t settle this year and after an awkward initial press conference, Jed York acted swiftly to score Kelly on the rebound after the ex-Eagles coach was exiled from Philadelphia following three seasons and 26 wins. Kelly won’t worry about being a GM in San Francisco and inherits a situation with upside at the quarterback position. Resurrecting Colin Kaepernick is a possibility, Blaine Gabbert could be a fit in his system (SERIOUSLY) and the No. 6 pick could end up netting them Paxton Lynch or Jared Goff. Carlos Hyde could be a strong fit in Kelly’s scheme.


MATT PATRICIA to DET in 2018, courtesy of CBSSports.com


Another situation where it's difficult to hate on someone plucking away a coveted Belichick assistant, and it sure does feel like a pretty good fit for Patricia, who can stay away from the limelight of a city like New York, while also walking into a job that features GM Bob Quinn, a former colleague of his in New England, and a franchise quarterback in Matthew Stafford.

Patricia gets a slightly lower grade than McDaniels primarily because we don't know exactly who he will be as a head coach, although by all accounts he is plenty smart enough to handle the job, if not much more.


FREDDIE KITCHENS to CLV in 2019, courtesy of CBSSports.com


This one is simple. For the Browns, it's all about pairing Baker Mayfield with a coach who knows how to develop him. After watching what Freddie Kitchens did with Mayfield during the second half of the season, why would the Browns have hired anyone else?

I don't care that much if Kitchens doesn't have much experience. The Browns' future depends entirely on Mayfield's development. And Kitchens already proved he's a perfect fit for that aspect of the job.


So, I implore you, Nick Caserio, take your time! We do not need to follow up the questionable David Culley hire with the next Freddie Kitchens!