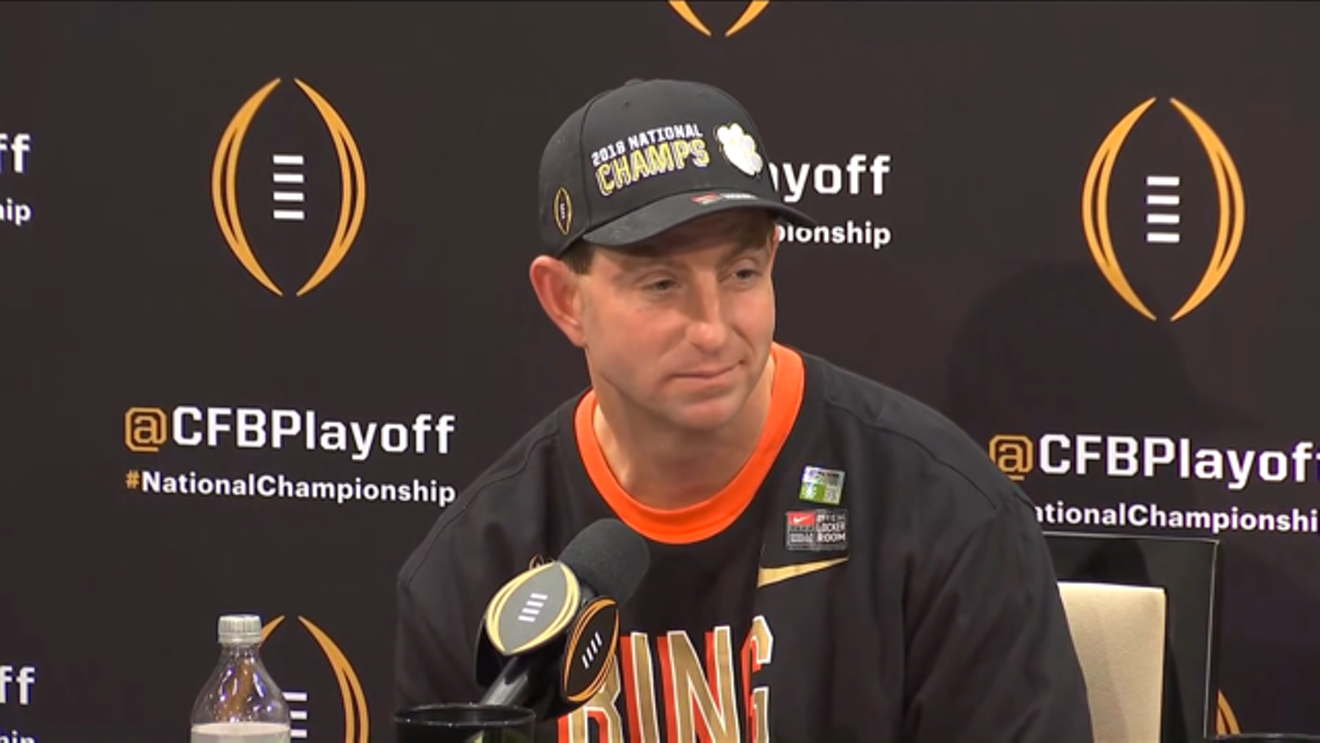 Swinney flowed up his national title with his third Bryant Award. Screen grab from YouTube
As we wind down the sixth season of college football played under the four team playoff system, perhaps you've noticed that there is one particular barroom argument that has been in hibernation all season long — expansion of the playoffs from four teams to eight teams. Maybe I'm not paying as much attention to the national narrative or perhaps it's just not topical on my own radio show because Texas and Texas A&M are VERY average (again), but the outcry for a larger playoff seems dead this year.

So why is this? Well, I have a few theories, and it's likely the cumulative effect of all of this:

There is no undefeated Group of Five school hanging around in November
The last couple years, it's been the AAC's Central Florida going undefeated into the bowl season that's stoked the embers of this debate. A few seasons ago, it was Tom Herman's Houston Cougars. This season, there are several good Group of Five schools — Cincinnati, Memphis, Boise State, Appalachian State — but they all have one loss, so there's no reason to discuss whether or not they are equals with Power Five schools, or wring our hands over schedules.

There is no Power Five conference that is looking at getting screwed
With a four team playoff, and five Power Five conferences, the math is already predisposed to debate. By definition, at least one conference (and sometimes it's been two) gets left out of the dance, and typically that conference has a worthy candidate. This season, sure, we could end up with a one-loss beauty contest for the fourth spot, but the feeling is that they all have flaws, either functionally (Alabama losing Tua for the season) or resume-wise (Georgia and Oklahoma each lost to unranked teams, Utah lost to 25th ranked USC).

Notre Dame is merely pretty good, not playoff worthy
The Irish are 14 point favorites against Stanford this weekend, so they will likely finish 10-2 and sit on the fringe of the New Year's Six bowl debate, but they're nowhere near the playoff, so there's no chance of the conference-unaffiliated Irish stealing a spot from a worthy Power Five squad.

Last add on this, Peter Burns of the SEC Network brings up a great point in defense of the current system.

You want expanded playoffs in CFB?

You got it yesterday

Penn State had a playoff game They lost.

Oregon had a playoff game They lost.

Oklahoma had a playoff game They advanced

Baylor had a playoff game They advanced

Utah had a playoff game.
They advanced


Amen! Now, let's get to this week's rankings and playoff projections, where the list of possible playoff schools is now down to nine. Here are this week's AP rankings:

When the four playoff teams are announced tonight, the top four should hold serve:

2. OHIO STATE (11-0, 8-0)
GOOD WINS: vs Cincinnati 42-0, @ Indiana 51-10, vs Wisconsin 38-7, vs Penn State 28-17
REMAINING SCHED:
11/30 @ #12 Michigan
12/7 Big Ten Title Game vs #9 Minnesota OR #13 Wisconsin
PLAYOFF OUTLOOK: Ohio State is basically the Big Ten version of LSU, from THIS standpoint — they can lose to Michigan this weekend in Ann Arbor, and win the Big Ten title and still get in. Losing the Big Ten title game could be more problematic for Ohio State, especially if it's to a one-loss Minnesota. The Buckeyes don't have the overall resume of LSU.

3. CLEMSON (11-0, 8-0)
GOOD WINS: vs Texas A&M 24-10
REMAINING SCHED:
11/30 @ South Carolina
12/7 ACC Title Game vs Virginia OR Virginia Tech
PLAYOFF OUTLOOK: Clemson's plight only gets interesting if they're upset by South Carolina, or if they lose in the ACC title game. Otherwise, if they win out — and they'll be favored heavily in each of their final two games — they are in.

HAS A PULSE, CONTROLS OWN DESTINY (1 team)

ALABAMA (10-1, 7-1)
GOOD WINS: @ Texas A&M 47-28
LOSS: vs LSU 46-41
REMAINING SCHED:
11/30 at #16 Auburn
PLAYOFF OUTLOOK: Of all the seasons, because of the injury to Tua Tagovailoa, this is the one where a one-loss Alabama is going to get hurt by not playing in the SEC title game. I think if Utah or the eventual Big XII champ have one loss, they'll both jump THIS iteration of Alabama in the rankings.

UTAH (10-1, 7-1)
GOOD WINS: @ Oregon State 52-7, @ Washington 33-28
LOSS: @ USC 30-23
REMAINING SCHED:
11/30 vs Colorado
(Possible) 12/6 Pac-12 Title Game vs #14 Oregon
PLAYOFF OUTLOOK: The worst thing that happened to Utah this weekend was their Pac-12 Title Game opponent, Oregon, losing to Arizona State. A Pac-12 championship game win for the Utes has less juice now, with the Ducks being ranked down in the teens somewhere, not in the top six or seven where they were before the Sun Devils upset them.

BAYLOR (9-1, 6-1)
GOOD WINS: @ Kansas State 31-12, @ Oklahoma State 45-27
LOSS: vs Oklahoma 34-31
REMAINING SCHED:
11/30 @ Kansas
OKLAHOMA/BAYLOR PLAYOFF OUTLOOK: The Sooners and Bears both have road games to close out the regular season, and then they will have a rematch of their 34-31 loss from a couple weeks ago. The winner fo this game will have a playoff argument of varying degrees of strength. Baylor's die is probably cast already, with their weak out of conference schedule, even if they beat the Sooners. The Bears are probably bound for a really good bowl game, not a playoff game. The Sooners have more equity to enhance the resume, with a Top 25 rivalry game this weekend against Oklahoma State, and then the Bears, presumably a top ten team at that point, in the conference title game.

OREGON (9-2, 7-1)
KNOCKOUT BLOW: Lost to Arizona State 31-28
Here lie the Ducks, who found a way to lose to Herm Edwards to get knocked out of the playoff picture, and whose most impressive game of the season was a loss to Baylor.

PENN STATE (9-2, 6-2)
KNOCKOUT BLOW: Lost to Ohio State 28-17
Here lie the Nittany Lions, who gave a good fight against the Buckeyes, but in the end will probably play in a New Year's Six bowl, and are destined to years and years of playoff FOMO because they're in a division with Ohio State and Michigan.