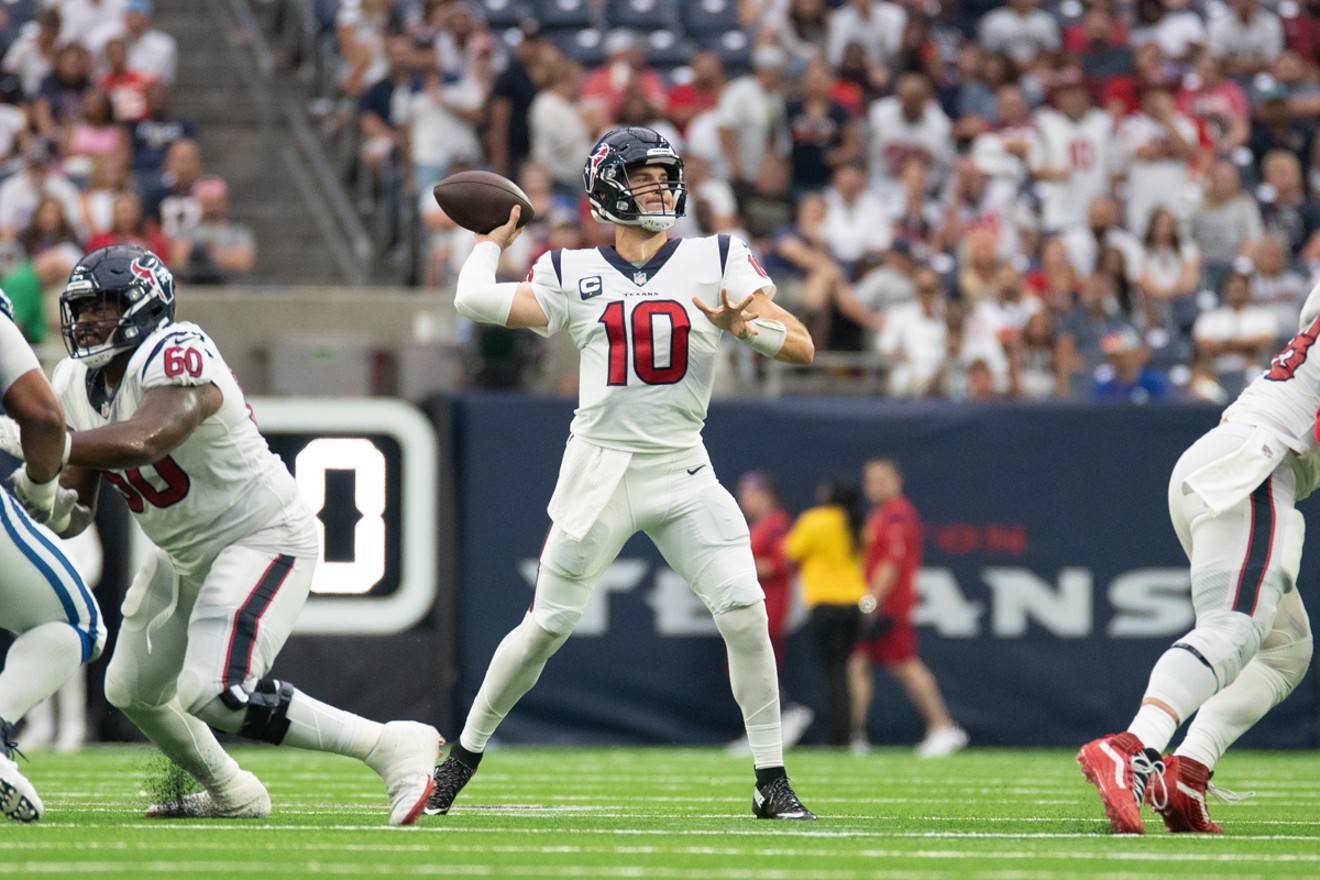 The arrow is pointed down right now on Davis Mills. Photo by Jack Gorman
I have no idea how this 2022 season is going to eventually unfold for the Houston Texans. We are two weeks in, and they sit at 0-1-1, after Sunday's 16-9 loss in Denver to the Broncos. It was a hard fought loss, one in which the Texans covered the 10 point spread, but ultimately, like last week against the Colts, it was about the opportunity that was squandered.

Chances are the Texans will finish among the bottom heap of teams in the NFL in 2022, especially if the version of Davis Mills we've seen thus far this season is what we get this entire year. However, if they're hanging around anywhere close to the wild card race in December, they will look back at these first two games and see two opponents who did EVERYTHING (and then some) that they could to hand the Texans a victory.

As it was, Sunday ended in defeat for the Texans. There were winners and losers in Denver, and around the league in Week 2. Let's take a look!

4. Dameon Pierce
Lovie Smith promised us last week that we would not have to witness a replay of the travesty against the Colts that saw Rex Burkhead touch the football 19 times and Pierce just 12 times. Instead, Pierce got 15 carries against Denver, and Burkhead's only touches were a couple of short catches in the passing game. Pierce averaged a solid 4.6 yards per carry on those 15 totes, and many of them were carries that required Pierce to break tackles. Nothing was really clean. That's just how it's going to go this season, but Pierce looks like the real deal, and thankfully OC Pep Hamilton seems to have figured that out.

3. Next Gen Stats and Kyler Murray
Taking a brief left turn from the Texans' loss, take a look at this play by Kyler Murray during the Cardinals 23 point comeback against the Las Vegas Raiders. Holy smoke!

This video serves as a reminder that playmaking quarterbacks are necessary to win in this league, especially if your overall talent level of the roster is average to below average. All hail, Kyler Murray. For the Texans, finding their Kyler continues.

2. The defense as a whole
The bottom line through these first two games is that the Texans have played good enough defense to win the games. Sure, they gave up 517 total yards of offense against the Colts, but if Davis Mills and the offense can get ONE score in the fourth quarter, the Texans win that game, and nobody is taking about the yards allowed. Instead, Mills went 0-4 passing in that quarter last week. Yesterday, the defense was even better, forcing Russell Wilson into one of his worst days as a pro, completing just 14 of 31 passes, and they were particularly stout in goal-to-go situations, holding the Broncos to a couple of field goals in the first half with the ball inside the five yard line.

1. The other little sisters of the poor
The five teams picking at the top of the NFL Draft this past spring — in other words, the five worst teams last season — were the Jaguars, Lions, Texans, Jets, and Giants. The Texans were the only one out of those five to lose a game on Sunday. The other four had wins that were fairly significant, if not outright scintillating. The Jags shut out the Colts, 24-0. The Lions ran up a 22-0 lead, before beating the Commanders, 36-27. The Jets came back from down 13 points in the final 90 seconds to beat Cleveland, 31-30. Finally, the Giants moved to 2-0 on the season, beating the Panthers by a score of 19-16. I don't know if one week means all of these teams are ahead of the Texans on their rebuild. Hell, only one of them, the Jags, probably has their certain QB of the future right now, but I was quite jealous watching the other 2021 "little sisters of the poor" do big things on Sunday.

4. Nathaniel Hackett
Hackett made one of the most boneheaded decisions in recent league history when he opted for a 64 yard field goal to try to win the game on Monday against Seattle, as opposed to letting Russell Wilson try to convert a short fourth down with about a minute to go in the game. Amazingly, Hackett said "hold my beer" to himself, and proceeded to make a PARADE of dumb decisions on Sunday. Hackett almost singlehandedly kept the Texans in this game with his play calling in the red zone (jet sweep option using the tight end, anyone?), his time out usage in the second half (all three gone by 7:00 to go in the game), and multiple delay of game penalties that were so egregious that the Denver crowd was counting the play clock down in the fourth quarter to help him out. If I'm a Bronco fan I feel worse after that game than a Texan fan should after a loss. Your two most important employees were mediocre (Wilson) and awful (Hackett).

3. The wallets of several Bucs and Saints
If you missed it, after some healthy trash talk from Saints CB Marshon Lattimore to Bucs QB Tom Brady, Galveston's own Mike Evans was having none of it:


Mike Evans & Marshon Lattimore have been ejected after this fight 🍿
pic.twitter.com/25NifN3x8U

Get the wallets out, boys. Roger Goodell is on line one.

2. Derek Stingley, Jr.
Stingley has bright days ahead of him, no doubt, but he got baptized on Sunday hy Courtland Sutton, who went for 7 catches for 122 yards, and was a menace all afternoon. Stingley still looks, at times, like he is trying to get comfortable in Lovie Smith;'s system when it calls for him to play zone, and to be fair, Stingley had a couple pass breakups that flashed why Nick Caserio thought so highly of him on draft night, but Sunday was a long day for the rookie.

1. Davis Mills
In the end, very little else that goes on with the Texans, offensively or defensively, matters Sunday's version of Davis Mills is the one we are getting this season. He was inaccurate, at times, once again, but most disturbingly, he went into a shell in the second half of the game and looked like a deer in the headlights. If I was a Bronco fan, when the Broncos went up 13-9, I would have had zero fear that Mills would bring the Texans back. I don't know what has happened to the Mills that started the last five games of 2021 and put up a 102.4 passer rating, but that version has not shown up yet this season.