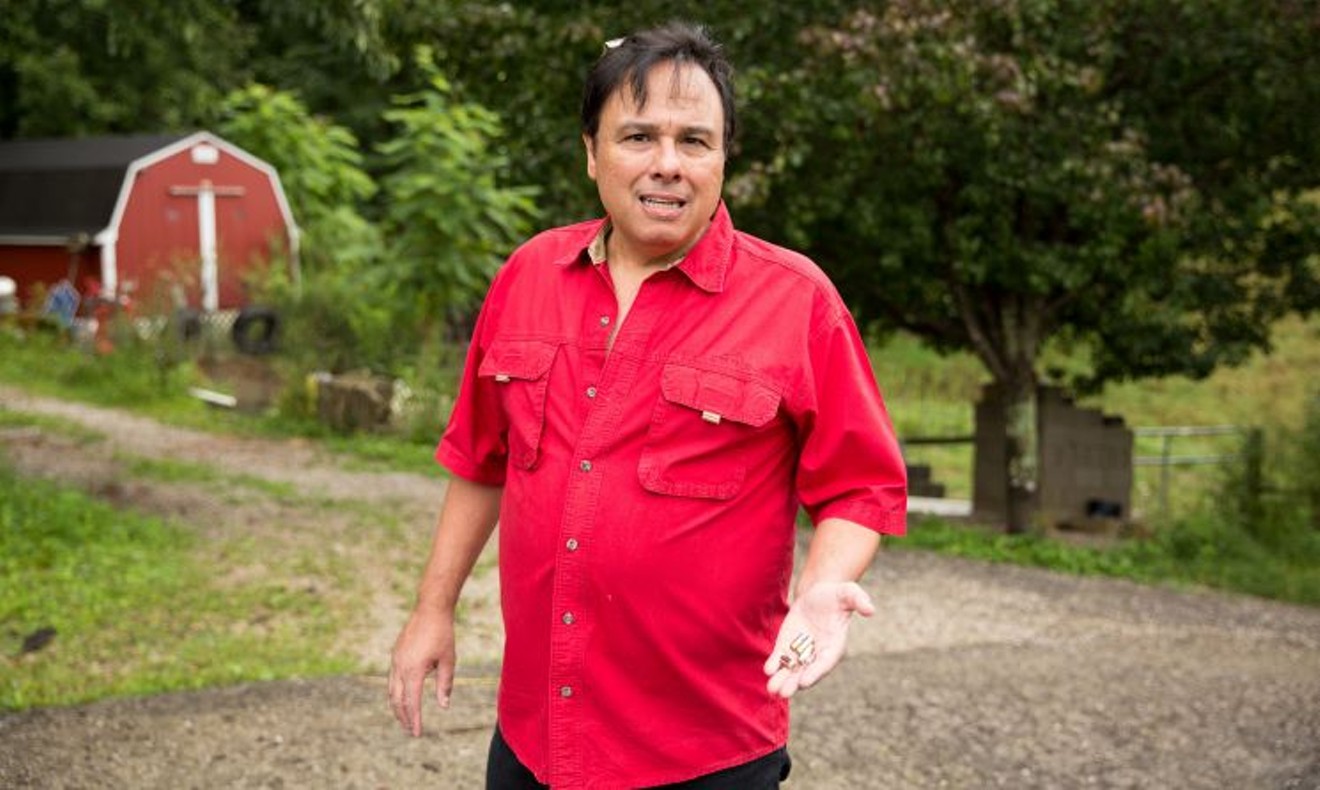 Gerardo Serrano holds the five bullets that border patrol agents found in his truck at the Eagle Pass checkpoint. The agents called the bullets “munitions of war” and he says used them to seize his truck. Photo by J. Justin Wilson/Institute for Justice
Some people do not like to be told no. I learned this lesson the hard way on Sept. 21, 2015, at a border checkpoint in Eagle Pass, Texas.

Although I was born in Chicago, I have family in Mexico that I had not seen in years. So I drove from my home in rural Kentucky for a visit. While waiting to cross a bridge over the Rio Grande, I snapped a few photos on my phone so my cousins could see where I was.

Using the camera was legal, but two agents from U.S. Customs and Border Protection saw me acting like a tourist and told me to pull over. They asked me to delete the photos and I agreed, but that did not end the confrontation.

They also wanted me to hand over the phone and provide my passcode. I had done nothing wrong, and the agents had no probable cause or warrant, so I declined. I had rights, I explained, but the agents did not care. “You don’t have rights here,” one of them told me.

What came next was the start of a five-year ordeal that culminated in April when the U.S. Supreme Court declined to hear my case. The agents opened my door, unbuckled my seatbelt and yanked me from the truck.

Then they proceeded to rummage through the vehicle. The scene seemed surreal, like I had fallen asleep and awaken in a land without liberty. I looked around for a flag or anything to prove I was still on U.S. soil.

Eventually, the searchers found five bullets that I had forgotten in the truck’s center console, and accused me of carrying “munitions of war.” Using the discovery as a pretext, they handcuffed me, interrogated me and locked me in a concrete cell with no windows.

Four hours later, they released me but refused to return the truck. Instead, they attempted civil forfeiture, a moneymaking scheme that allows the government to seize and keep property permanently without convicting the owner of a crime.

Rather than enjoying a family reunion, I found myself on the side of the road with my suitcase—1,300 miles from home. For the next two years, the government buried me in paperwork and ignored my petitions for a hearing to reclaim the truck.

While all of this was going on, I had to continue making loan, registration and insurance payments on the truck to maintain my credit score, something essential for my livelihood. Overall, I paid thousands of dollars for a vehicle I could not drive.

Finally, I partnered with a public interest law firm called the Institute for Justice, which fights civil forfeiture. The government quickly returned my truck following a lawsuit, to make it go away, but refused to adopt procedures to prevent similar misconduct in the future. The government also refused to compensate me for the financial hardships and civil rights violations.

A trial court agreed that the government owed me nothing and could hold my truck for years without a hearing, and the 5th U.S. Circuit Court of Appeals came to the same conclusion. Despite the setbacks, I still had faith in the system. So I went to the Supreme Court with a simple question: Can the government take a vehicle and try to keep it without giving the owner a prompt hearing?

The Fifth Amendment guarantees due process, which should make the answer obvious, but all I got from the court of last resort was silence. The rejection of my case left me looking around, once again, for evidence that I was still standing on U.S. soil.

The government exists to protect individual rights, not trample on them. As things stand, people cannot demand prompt hearings while government abuse is ongoing, and they cannot hold the government accountable afterward by seeking damages.

Congress cannot let the lack of accountability stand. It must pass meaningful reform.

Otherwise, what can I tell my relatives in Mexico? When I failed to arrive on time for the visit in 2015, they worried that criminals had intercepted me south of the border. The truth was worse. My own government did so before I even could leave the United States.

Gerardo Serrano lives on a farm in Tyner, Kentucky.
KEEP THE HOUSTON PRESS FREE... Since we started the Houston Press, it has been defined as the free, independent voice of Houston, and we'd like to keep it that way. With local media under siege, it's more important than ever for us to rally support behind funding our local journalism. You can help by participating in our "I Support" program, allowing us to keep offering readers access to our incisive coverage of local news, food and culture with no paywalls.
Make a one-time donation today for as little as $1.