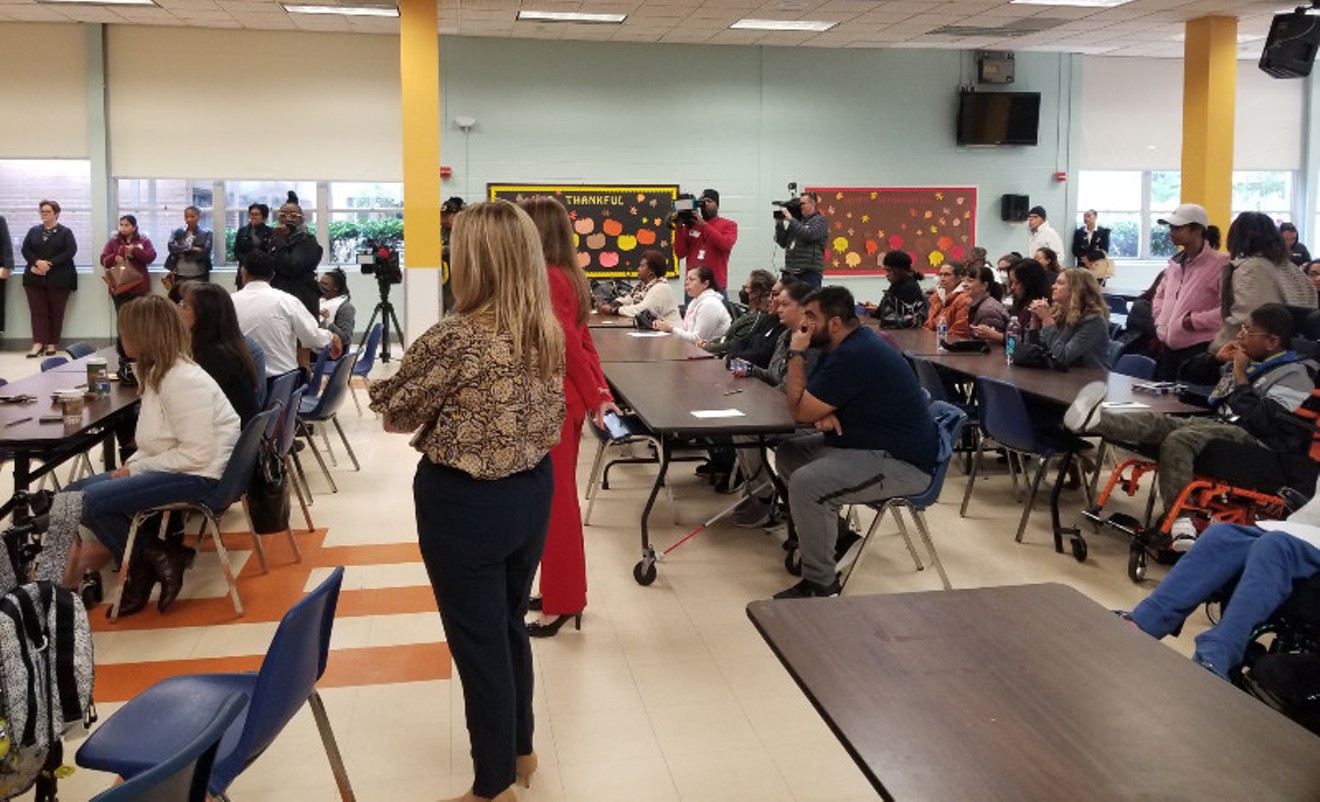 Parents wanted to know why if T.H. Rogers wasn't broke, why HISD was insisting it was "fixing" things by moving out its special ed kids. Photo by Margaret Downing

Friday morning's meeting between administrators and T.H. Rogers parents and others concerned about the Houston ISD plan to off-load its special education kids there back to their home schools, didn't exactly live up to how HISD likes to bill itself as "transparent."

Let's count the ways. First of all, although the meeting was a public one, HISD officials wanted to throw out the media — thwarted only by the insistence of parents there who want their story told.

Then we found out that administrators planned the change since early in 2022 but parents were only informed in a letter that went out Monday (11 months later). Parents were never included in any discussions about whether it was a good idea to finish converting Rogers from an acclaimed school with three diverse populations — deaf, special ed and Gifted and Talented — to GT only.  The hearing-impaired students were shipped out last year without fanfare.

Also, if Principal Tiffany Chenier is to be believed (and she shifted her position a few times during her presentation) the decision to move the special ed kids is a done deal.  "Yes, a decision has been made."  (She also apologized to the parents and insisted, "This was a surprise to me as much as it was to you.")

So why were parents invited to this meeting to share their thoughts if everything is set in stone already? Sounds like someone is just ticking off a task box. By the end of today's meeting, HISD assured us another meeting is planned. To what end we wonder.

Another source of wonder was Cindy Hoppman, executive director of HISD's Office of Special Education Services since September, who wrote the delightful November 15 letter to parents and who on Friday, aided by a power-point complete with pyramid chart, spent time citing the Least Restrictive Environment mantra. This would be better, really, and it was called for by the law, she said.

Hoppman insisted that they don't know exactly to what schools the special ed kids will be moved. This despite all the data the district has on the 32 kids involved, strained credulity that after 11 months of study by an HISD team, they still haven't figured out what schools those kids are going to?

If Houston ISD was determined to show its, well let's say "behind," it couldn't do much better than its performance Friday morning when it tried to explain how moving special ed students away from the specialized facility with a trained staff that knows the children was news that HISD was "excited to share,"  as Hoppman had put it in her letter.

"You're going to throw our kids to the side," charged parent Jose C. Sanchez whose son Alex "Superman" Sanchez is in special ed at Rogers. "This is the dumbest idea in the whole wide world. What makes you think that we're going to go to a school that we tried to get out of that you're going to try to turn around and put us back in?"

"We are the taxpayers. Do you think for one minute that if we had the vote on this that we would be here?" said parent Paul Senegal. "Unfortunately the TEA [Texas Education Agency] and HISD behind doors, planned who knows what, but the TEA and HISD are not the parents of these children."

From the start, the meeting was a rocky one when parents, who were already very unhappy, were told that the conversation would be just between them and HISD administrators and the media would have to leave the room for legal reasons — even though this was a public meeting.

Television camera operators objected but not as loudly as the crowd whose members shouted "Let the media stay!" and "We've already signed all the release forms!" And questioned what HISD was continuing to try to cover up.

Broadcast media, readily identifiable because of their cameras, were escorted out under protest while HISD public information officer Luis A, Morales, in a fine display of semantics gamesmanship, announced that the media wasn't being "ousted," it was just being asked to wait outside and parents could talk to them there. No one was buying that.

After half the room of parents got up and left announcing that no media would mean no meeting, the powers that be at HISD reassessed their approach and allowed the media to return. Unfortunately this delayed the start of the 9 a.m. meeting by 15-20 minutes and kids were due in for lunch by 10:30.

As explained by Hoppman, older special ed students at Rogers are not surrounded by their peers, defining "peers" as some of the same age. Several parents pointed out that intellectual age rather than physical age should be the defining factor.

Some with experiences at other HISD schools that they recounted, were certain that many of HISD schools have no business taking on this children having neither the trained staff or facilities to meet their needs and that these students will end up isolated rather than included in general activities as they have been at Rogers.

"The services that our children get here, other schools don't profile," said parent Anitra Washington. "Do you know how much it took for people to get their children into this school? Because of this school?"

"You are the worst school district when it comes to communication," she added. "Y'all do not listen. Y'all don't understand. Nor do you have a heart.  You are not living in our shoes."

Officials painted a rosy picture of comprehensive schools with more classes, clubs, activities and social events available. But looking around the room Friday filled with many of these physically and mentally disabled, many of whom were strapped into wheelchairs, a person has to wonder how many of these boffo high school activities they'd realistically be able to participate in. Or would they just be isolated in a special room in the school?. And would they be accepted as they are at Rogers or be greeted by stares and pointed fingers as they showed up for school at their home campus?

The transportation card was played — students wouldn't have as far to travel to reach Rogers if they went to their home school. But as Sanchez said, these are parents who choose to drive that far because they know Rogers is the best place for their children.

And in an updated statement following the meeting, HISD spokesman Morales wrote that the decision to move out the special ed children "was made at the direction of the TEA." This differed from an earlier HISD statement released this week saying "this decision was made after extensive consideration and collaboration with our TEA Special Education Conservators."

One speaker, a physician,  who said her daughter is in the Vanguard program at Rogers, said when she heard the news she did research and said many medical experts said removing the special ed students from Rogers could have a negative impact. She also raised the question of whether personnel at comprehensive schools would be able to handle an active shooter on campus incident and make sure these kids, especially with all their special equipment, would get to safety.

Kelly Millner, whose daughter aged out of the special ed program at Rogers said rather than talking about the Least Restrictive Environment, school officials should be discussing: "Where are our students the most supported?"

Principal Chenier wasn't the only one handing out apologies. Hoppman handed out what seemed to be heartfelt ones of her own. Except, except, except —  nobody thought of including the parents before this? This was a last-minute slap-your-head moment of "I knew we forgot something?" From high-level administrators who are supposed to be trained in all the community engagement protocols? In getting buy-in before you make a major change?

Sorry but this is classic case of "it's better to beg for forgiveness than than to ask for permission." Alas for HISD, parents weren't in the forgiving mood Friday.

Parent Julie Beeson urged those in attendance to fight the district's plans and put HISD on notice.

"Get your kid  a lawyer," she told the crowd as she recited the phone number for the Austin-based Disability Rights Texas group, dedicated to protecting the rights of disabled Texas residents, at 512-454-4816.

"They want this to be over today, take their lumps and go home," she declared.

These parents are trying to protect their children. There are few human emotions stronger than that. At this point, special ed parents aren't buying what HISD is selling.

Based on what's transpired here and the experiences they've already had with schools in the district, why should they?
KEEP THE HOUSTON PRESS FREE... Since we started the Houston Press, it has been defined as the free, independent voice of Houston, and we'd like to keep it that way. With local media under siege, it's more important than ever for us to rally support behind funding our local journalism. You can help by participating in our "I Support" program, allowing us to keep offering readers access to our incisive coverage of local news, food and culture with no paywalls.
Make a one-time donation today for as little as $1.