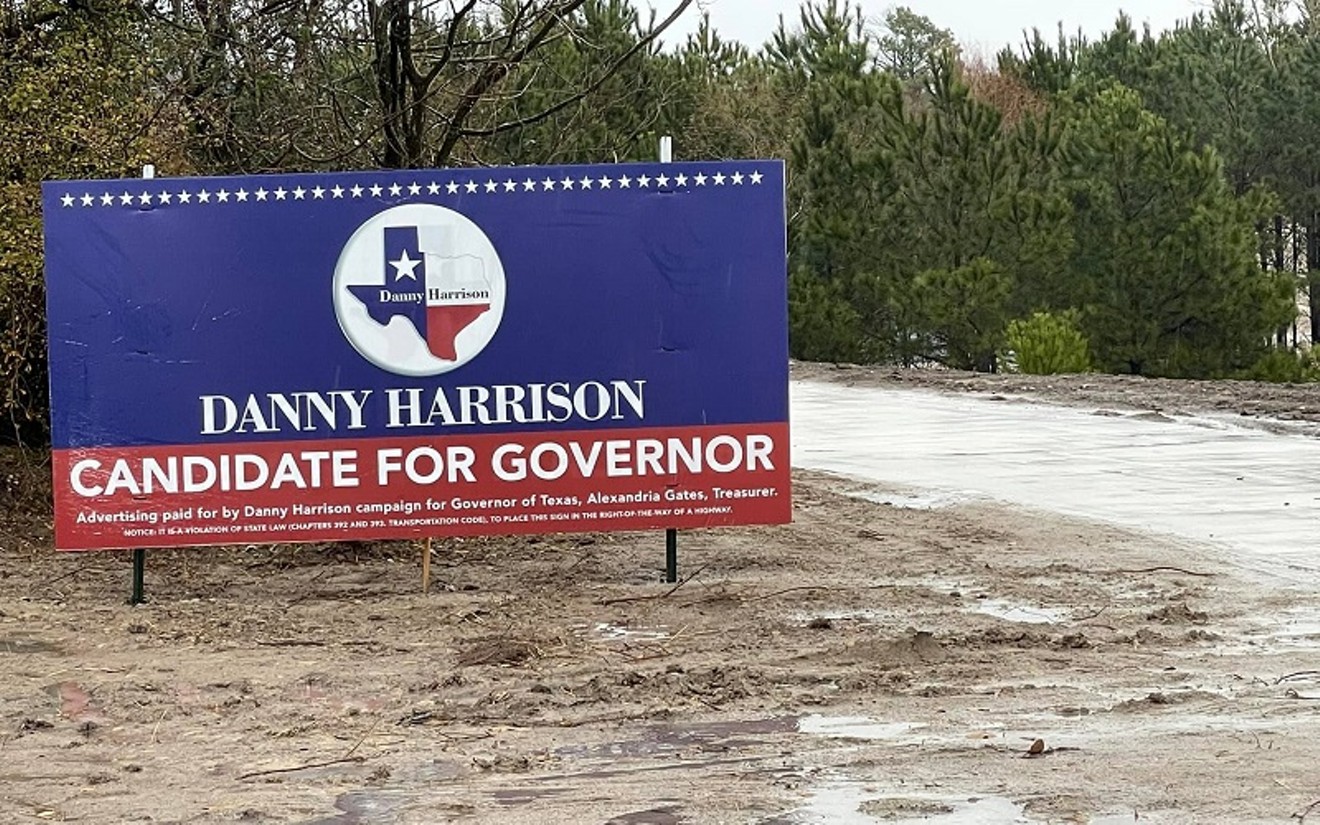 Danny Harrison is opposed to mandates, but spends no time promoting vaccination as a choice. Photo by Jef Rouner
On the surface, Danny Harrison looks like he might be a more palatable Republican choice for Texas governor. Right now, Governor Greg Abbott, former head of the Texas GOP Allen West, and former Texas State Sen. Don Huffines are in a three-way battle for the nomination to see who can veer the further to the extreme right, with Huffines going so far as to defend an openly white supremacist staffer of his. By contrast, Harrison wants to legalize marijuana, keep low level offenders out of jail, and end the arrests of undocumented immigrants on trespassing charges that seem a lot like entrapment. He’s also really into legalizing gambling if that’s your thing.

That said, the true test of leadership over the last two years is how someone handles the ongoing COVID-19 pandemic, and there Harrison is coming up very short. His pitch seems very reasonable on the surface. He is all for vaccines… so long as no one is ever made to get one they don’t want to. In fact, he generally posts about it once a month.

“I think [vaccine passports] are nuts. I think that’s crazy," he said on August 5. “I think New York has gone so far left they’ve left America… That sure as Hell isn’t going to happen in this state.”

I do support Governor Greg Abbot on telling employers in Texas they can’t force their employees to take the vaccine,” he said on October 13. “I’m not opposed the vaccine. I’m not opposed to people wearing masks. I’m opposed to mandates. The product is still new. There’s a lot of people that are still trying to figure this vaccine out. They want to understand what’s going on. That’s the best way to approach it. The best thing to do is to let regular Texans talk to their doctors, do their own research, and they can make the decision on whether they want to do the vaccine or not.”

“The federal government has never in the history of this country forced vaccine mandates on its citizens,” he said on November 5. This is not entirely true as the federal government has mandated vaccines for soldiers for decades. The states certainly have a long history of vaccine mandates, and it’s assumed that by the logic Harrison is using he would oppose that as well despite it being a firmly established right of state governments.

Harrison’s rhetoric is a very common dodge among the anti-vax crowd that they use to deflect criticisms. They will assure listeners that they are fine with the vaccine, even that vaccines work, they just think that no one should be forced to get one. You might recognize this argument from its previous conservative incarnations, “integrated schools are fine, but no one should make them,” “it’s okay to not make a wedding cake for a gay couple just because they’re gay,” and “why should Hobby Lobby pay for birth control for their employees.”

It’s anathema to a lot of Americans raised on toxic absolute individualism, but sometimes we are forced to do things we don’t want to because otherwise the cumulative effect on the community is too harmful to be tolerated. If you didn’t make schools integrate, we’d still have separate and unequal racial societies (I mean, more than we already do). If LGBT people are unable to obtain services, it drives them away, and if company’s police what healthcare they provide it is essentially a denial of service because that’s how our system is currently set up.

Vaccines only work because nearly everyone who can get them does. Here in Texas, the vaccination rate from measles keeps dropping thanks to the state’s very liberal exemption policies that coddle personal choice to a ridiculous level. Consequently, every time the vaccination rate drops 5 percent, the potential for an outbreak increases 4,000 percent. This is no joke when it comes to a highly contagious disease that kills 1 out of every 1,000 kids who get it.

Similarly, getting the vaccination rate up for COVID, a disease that has killed nearly 900,000 Americans in just two years, is essential to stop that parade of death. Experts think we need to have somewhere between 70 and 90 percent vaccinated to achieve herd immunity. That number is simply not reachable without some kind of forced intervention or at least a massive propaganda campaign.

Instead, Harrison and others like him spend all their time railing against the concept of vaccine mandates or passports, and none of it on promoting the efficacy and safety of vaccines they claim to love. He says he supports them, and then does nothing to convince people to get them or even acknowledge how many lives they’ve saved. His energy is entirely focused on defending people who don’t get them. He even supports the nonsense that these miracles of modern medicine are new and untested nearly a year after their release, with literally hundreds of millions of shots administered, and with fewer than 20 deaths conclusively linked to side effects from the vaccination. Whenever vaccination strikes a win against COVID, Harrison is nowhere to be found, which speaks of his priorities.

A man who wants to be governor should have a plan for shepherding Texans through this pandemic that has killed 79,000 of us. If he wants to preserve the poisoned choice of refusing vaccination, he should at least be mobilizing to spread the news about the benefits of getting he jab. He’s not doing that, and the only logical conclusion to draw is that he doesn’t actually support vaccination all that much. His plan for COVID is inherently anti-vax by virtue of ceding all the authority to the forces opposing vaccination and leaving promotion of vaccination itself to others. Focusing on the concept of choice and completely ignoring what choice is being made is a cowardly dereliction of duty, not a bold alternative direction for a Republican governor.
KEEP THE HOUSTON PRESS FREE... Since we started the Houston Press, it has been defined as the free, independent voice of Houston, and we'd like to keep it that way. With local media under siege, it's more important than ever for us to rally support behind funding our local journalism. You can help by participating in our "I Support" program, allowing us to keep offering readers access to our incisive coverage of local news, food and culture with no paywalls.
Make a one-time donation today for as little as $1.