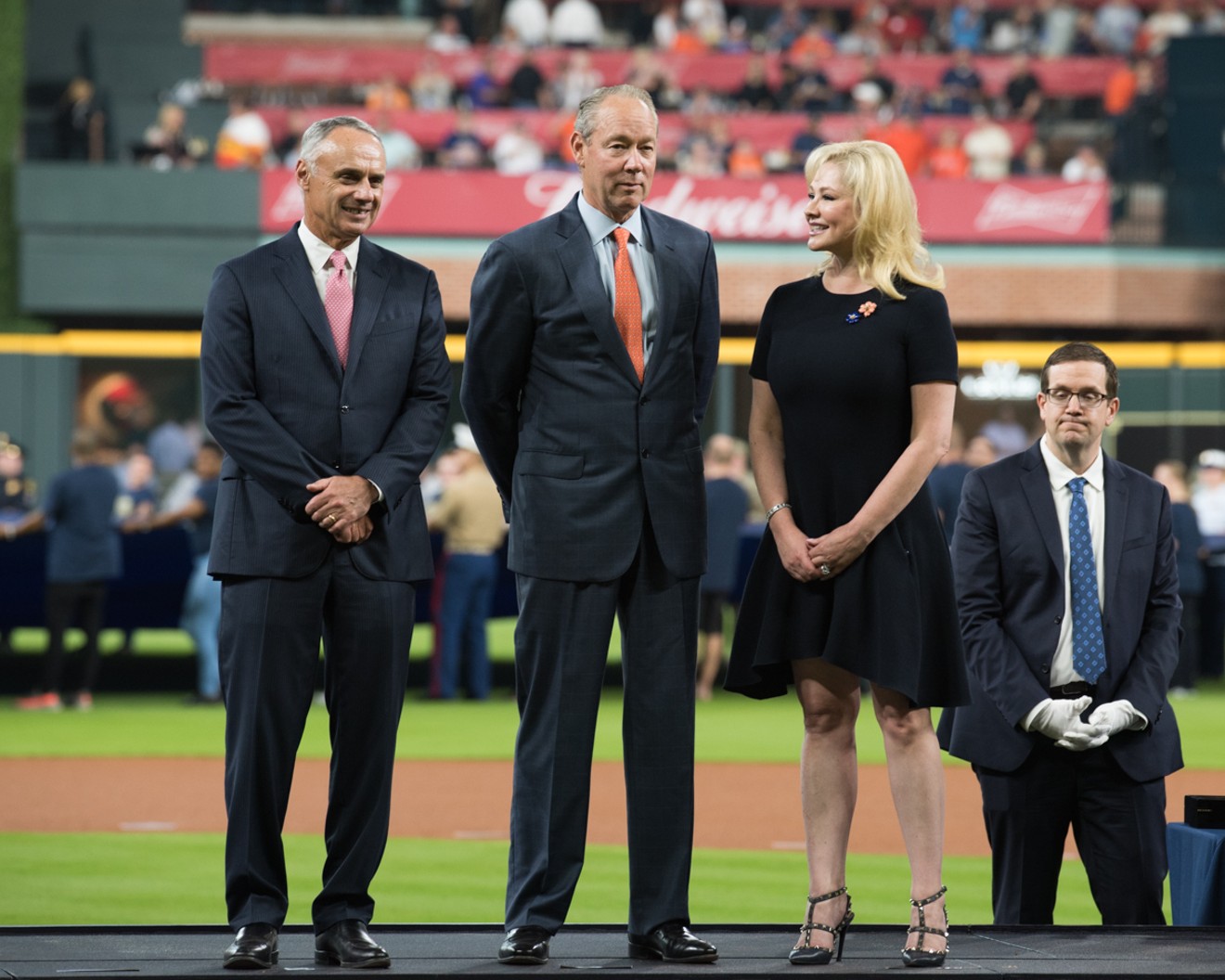 MLB Commissioner Rob Manfred (left), with Astros owner Jim Crane and wife Whitney Crane in 2018. Photo by Jack Gorman
What appeared to be feverish discussions between Major League Baseball and the MLB players' union fell apart on Tuesday when baseball owners' self-imposed deadline of 5 p.m. EST passed and baseball announced the first two series of the season would be lost and not rescheduled.

For the Astros, that means a pair of three-game series against the Phillies and the Yankees, both at Minute Maid Park. The fact that they won't play the New York series is a particular bummer given the rivalry and the fact that the Yanks only come to Houston once per season. It's also a huge series for ticket sales.

What is so disappointing about the losses goes well beyond games. In truth, the teams and the players are far apart on what they want from the next collective bargaining agreement with virtually no movement in sight. And there's no real need to get overly granular in the examination of what they want. The players want more money and the owners want to give them less. Same as it ever was.

But, before you go off clobbering millionaire players who get paid for a game, keep in mind that the owners' strategy here was not only brilliant, but brutal. On Monday, as the deadline MLB had set to complete negotiations came, reports were that management was optimistic a deal could be reached. They extended the deadline to Tuesday and everyone started to see a light at the end of the tunnel.

On Tuesday, owners and their representatives told media that negotiations had gone backward and, dad gummit, they did their darndest to keep this from happening, but these players just aren't interested.

Here's the problem with that narrative: The owners locked the players out and have dragged their feet on negotiations for quite some time. It has been their intent from the beginning to break the union by any means necessary including losing games. After all, we're talking about billionaires, some of whom don't need baseball games to make more money. The vast majority of players don't have that option.

This was clearly a tactical move by the owners and commissioner Rob Manfred, who claimed they were doing this for fans.

It's particularly galling when you consider that not only is World War III basically raging in eastern Europe, but we are still dealing with a pandemic, rising gas prices and inflation, and an already toxic political environment. The least baseball could do would be to put aside their differences for games.

But that isn't in the cards. The owners want it all and they are prepared to cancel as many games as they have to, potentially the entire season, to break the players and get their way.

For now, the Astros are out a couple series in a long season. But, it feels like a lot more will be lost in the coming days on and off the field.
KEEP THE HOUSTON PRESS FREE... Since we started the Houston Press, it has been defined as the free, independent voice of Houston, and we'd like to keep it that way. With local media under siege, it's more important than ever for us to rally support behind funding our local journalism. You can help by participating in our "I Support" program, allowing us to keep offering readers access to our incisive coverage of local news, food and culture with no paywalls.
Make a one-time donation today for as little as $1.