Who Shot Karma in the Head and Threw Her in a Dumpster? 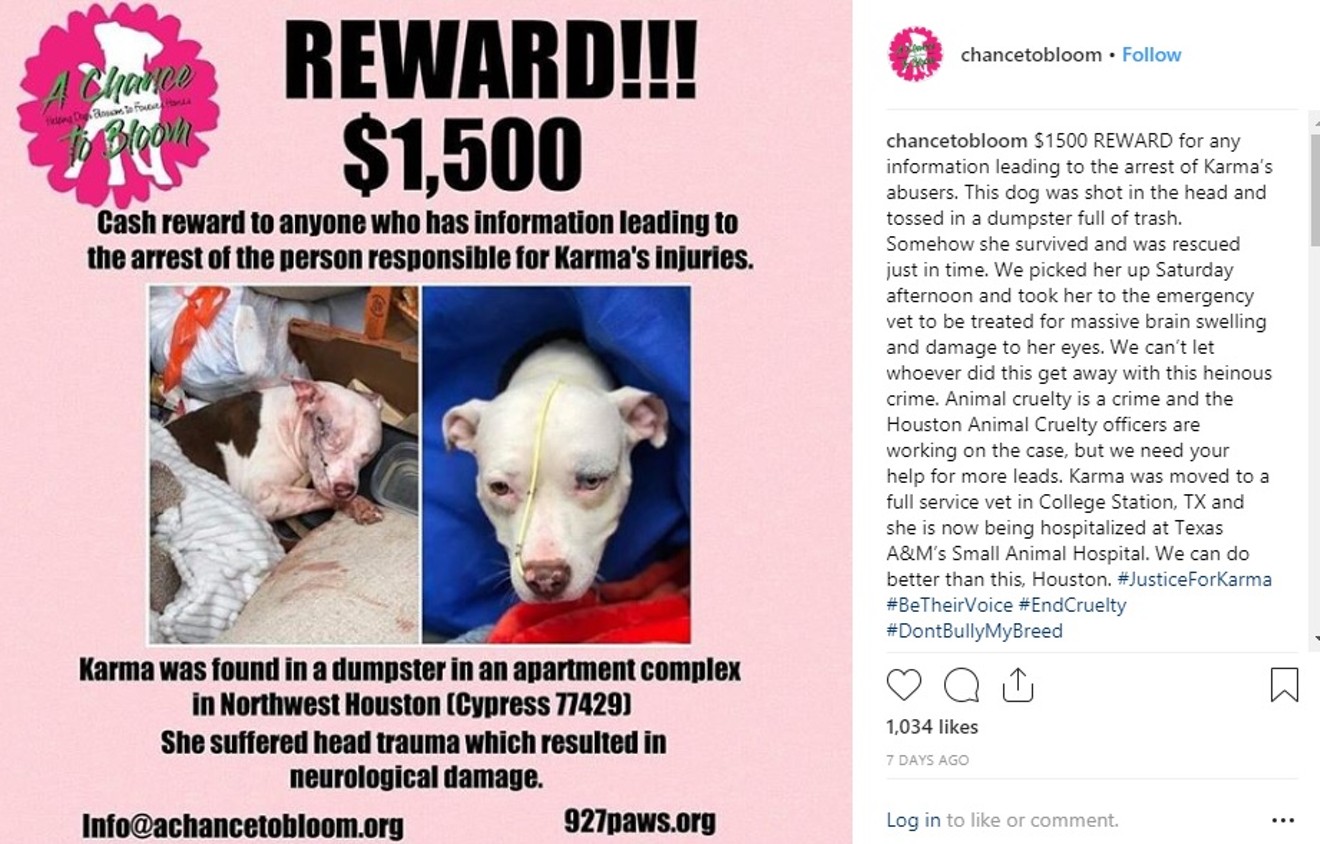 
A two-year-old pitbull named Karma who was found in a dumpster somehow miraculously alive after having been shot in the head is recuperating while local authorities — aided by now a $2,500 reward for information leading to an arrest  — are looking for who did this to her.

Karma was found in the early morning hours of February 9 inside the dumpster of a gated apartment complex in the Cypress area. Police have withheld the exact location for the time being, but said that it was in the 77429 zip code. The person who found her notified the Harris County Animal Cruelty Taskforce (HCACTF), who in turn contacted the rescue organization A Chance to Bloom. Board member Barbara Zuluaga arrived on scene to take Karma to the emergency room.

“They didn’t even bother to hide her body,” says Zuluaga. “They just tossed her on top of the trash thinking they were going to get away with it. In Texas they often do. Legislation here is weak and there’s this idea that animals aren’t important”

Despite blood leaking from two holes in her head, an MRI revealed no bone damage to Karma and she went home with Zuluaga. However, she did not improve and grew worse.

“She was wailing in pain and not doing well,” says Zuluaga.

Karma was eventually transferred to Texas A&M where a CT scan showed the full nature of her injuries. Incredibly, the bullet passed through her maxillary sinus and did not hit her brain. The pressure of the injury did blind her in one eye, but otherwise Karma escaped with only some swelling in her brain. According to Zuluaga, her prognosis of survival is good though she might display some continued mental impairment.

“This was a one in a million chance that you’re going to shoot a dog in the head and not hit her brain,” says Zuluaga. “All you can do with dogs who have suffered brain damage is give them time.”

As Karma recuperates, A Chance to Bloom and the HCACTF have been trying to find information on her assailant through flyers and a social media campaign. Zuluaga reports that hundreds of people have come forward. Donations to the group raised the reward from $500 to its current level, and they hope to double the amount soon.

Since it was founded in 2018, the HCACTF has seen a steep rise in the number of animal cruelty cases reported, around 200 percent. Rescue liaison Robert Acuna chalks that up to having a central agency to coordinate animal rescue and cruelty investigation that Houstonians can contact for cases. The HCACTF is a non-profit group that partners with rescuers like BARC and A Chance to Bloom as well as Crime Stoppers. They’ve helped get hundreds of animals out of dire situations and brought over 170 criminal charges to the people who put them there. Cases like Karma’s are part of their fight against animal abuse in the city.

“We’re pushing for information,” says Acuna. “I’m sure someone somewhere heard something. We’re trying to prevent this from happening in the future. Now people have a place they can turn to. Everything is funneled through the taskforce. We’ll send information to whoever can help.”

Karma remains in the care of A Chance to Bloom. The rescue organization made national news in 2018 when actor Justin Theroux adopted a pitbull named Kuma from them after a social media campaign. Kuma had been gravely ill with a skin condition and her body had begun to shut down before the organization stepped in. Theroux chronicles Kuma’s continued recovery on his Instagram page.

If you have any information regarding the attack on Karma, please contact A Chance to Bloom at [email protected] or the HCACTF at 832-927-7297.
KEEP THE HOUSTON PRESS FREE... Since we started the Houston Press, it has been defined as the free, independent voice of Houston, and we'd like to keep it that way. With local media under siege, it's more important than ever for us to rally support behind funding our local journalism. You can help by participating in our "I Support" program, allowing us to keep offering readers access to our incisive coverage of local news, food and culture with no paywalls.
Make a one-time donation today for as little as $1.