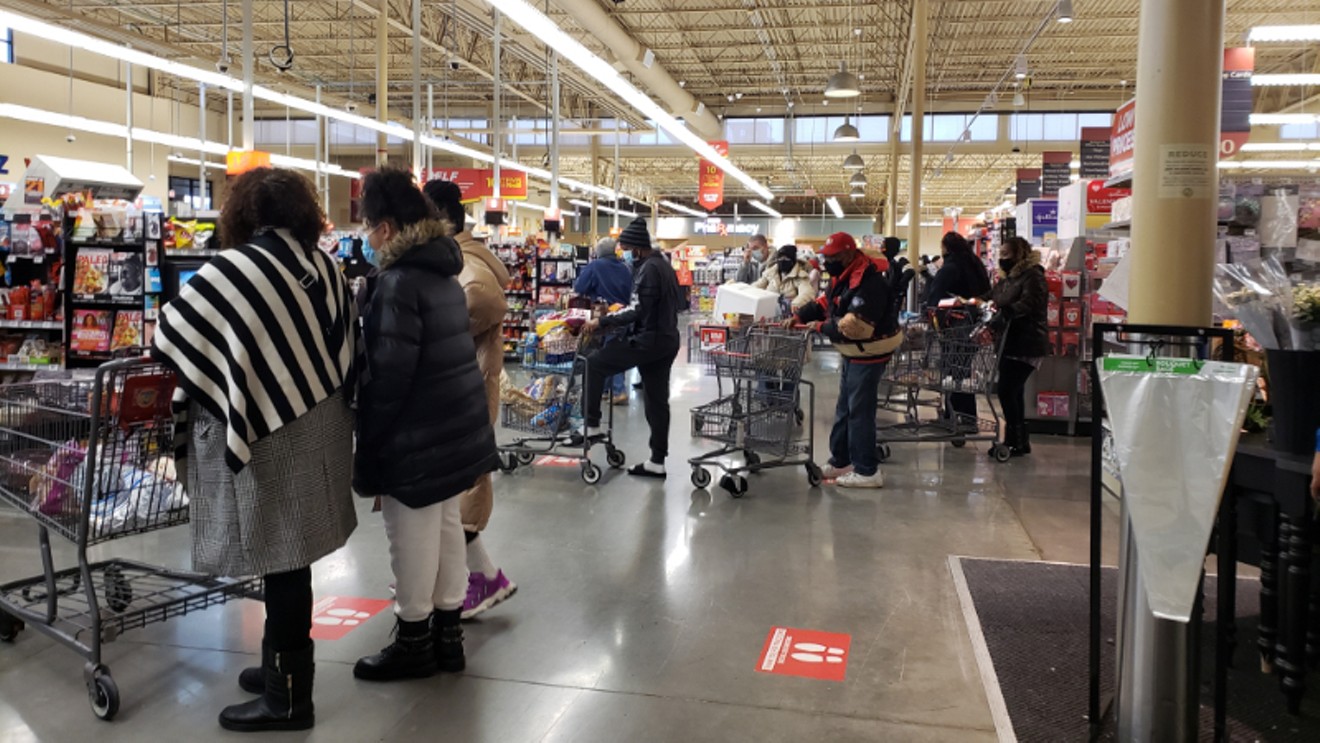 An H-E-B in Missouri City had long checkout lines as residents flocked to stock-up for the next few days. Photo by Abby Downing-Beaver
Despite some modest gains in the state’s electricity output as generators come back online, elected officials warned Wednesday that both the disastrous power outages and the lack of safe (or any) water many Houston residents are still facing could easily last until this weekend.

“Residents still need to be prepared to go a couple more days without power,” said Harris County Judge Lina Hidalgo in a Wednesday update on the still unfolding disaster. That’s because even though ERCOT (the Electric Reliability Council of Texas) has been able to get enough power generation back up and running to get around 200,000 CenterPoint Energy customers back online, there’s still a chance those new generators might later fall victim to weather-related issues that could bring them offline all over again.

Harris County Judge Lina Hidalgo said there's hope on the horizon even though outages could last through the weekend for some.
Screenshot
“We don’t know when they’re going to certify that the new generation is stable enough to where they can distribute it to residents without it taxing and being a problem for the grid to possibly collapse,” Hidalgo explained. CenterPoint VP Jason Ryan agreed with Hidalgo’s assessment of the situation.

Three days into a winter storm that’s brought the Lone Star State to its frostbitten knees, over a million folks in greater Houston still don’t have electricity. The Texas Commission on Environmental Quality said Wednesday that 7 million Texans — including virtually all Houston residents — are currently under boil water notices due to water pressure issues caused by the frigid weather and burst pipes across the state that have left providers unable to guarantee proper purification. That’s a number TCEQ director Toby Baker said he expects to grow in the days ahead.

Those same water pressure issues have caused many Houston area homes to lose running water entirely, as well as many of the region’s hospitals. Hidalgo addressed the dire water issues for our major healthcare facilities as a two-fold problem. “They can’t have the water that they need to conduct important processes, and additionally, even if the water pressure is down and they receive stored water from somewhere else… it creates problems for just the general operation of the hospital… think cleaning toilets, that kind of thing,” Hidalgo said.

Houston Mayor Sylvester Turner said earlier Wednesday he’s hoping the city’s water pressure issues might be resolved as soon as sometime Wednesday night, but cautioned that even under that rosy scenario it’d still be at least 24 more hours after hitting ideal pressure that boil notices could be lifted due to TCEQ water testing rules. He also said — unsurprisingly — that the city’s COVID-19 testing and vaccination efforts will still be paused through at least Thursday, and that any scheduled appointments would be rescheduled.

Cold and miserable Texans across Houston and surrounding areas flocked to local grocery stores during the day Wednesday to stock-up on food and water, clearing out plenty of shelves and causing massive lines at several H-E-B locations. Many of those shoppers were probably parents with kids at home on a storm-induced vacation, as the Houston Independent School District announced Wednesday that all classes — in-person and virtual — have been cancelled through Friday.

Plenty of Houstonians sought out food and water Wednesday and were met by long lines.
Photo by Doogie Roux

Gov. Greg Abbott attempted to share some details about the state’s disaster response in an afternoon press conference, but seemed more caught up with technocratic tweaks around the edges and minor policy moves than sharing any significant news on what got us in this crappy position in the first place.

In fact, he seemed less frustrated about the plight of millions of suffering Texans than he did about getting multiple questions from reporters calling him out about a Tuesday night appearance on Fox News with Sean Hannity.

On Hannity’s program, Abbott blamed renewable energy sources touted by Democrats for the power outage crisis. “Our wind and our solar power got shut down, and they were collectively more than 10 percent of our power grid,” Abbott said Tuesday, “and that thrust Texas into a situation where it was lacking power on a statewide basis.”

If that sounds to you like partisan pandering during a once in a century crisis, then you definitely don’t need a hearing aid.

Even though Texan wind and solar power have been hit hard by the Arctic weather, the state’s coal, nuclear and natural gas power generators have all been significantly sidelined by this hellacious storm. Abbott admitted as much on Wednesday.

“Over the last 24 to 48 hours I have conducted about two dozen or more interviews,” Abbott said in an attempted walk-back, “and I have repeatedly talked about how every source of power that the state of Texas has has been compromised, whether it be renewable power such as wind or solar, but also as I mentioned today, access to coal generated power, access to gas generated power also has been compromised… as well as our nuclear power facility.”

Gov. Greg Abbott rattled off around-the-edges policy shifts, but lacked vim and vigor in defending the state's failed storm prep.
Screenshot
Abbott said he’s ordered state natural gas providers who had still been selling the fuel out-of-state to cut that out pronto and focus exclusively on Texan customers at least through next week, a welcome shift that will hopefully get heat into more homes soon. He also listed off policy tweaks like making it easier for out of state plumbers and insurance adjusters to get temporary Texas licenses, and making it easier for plumbers with lapsed certifications to get back into the field to address burst pipes across the state.

Head-honcho of the Texas Democrats Gilberto Hinojosa blasted Abbott for the way his administration has handled this latest crisis. “Texas is in dire straits. Texans are dying. Homes are being destroyed, people are cold and hungry, and we have no idea when things will begin to return to normal because our state government continues to fail,” Hinojosa said.

He then called Abbott out for the Hannity appearance in particular: “This is the classic Abbott playbook: lie and do whatever it takes to not take responsibility for your actions.” Hinojosa said. “Abbott is too busy already running for president to help Texans who are trapped in the cold and on the verge of hypothermia and death.”

Newly-minted Harris County Attorney Christian Menefee said Wednesday that his office is working to help Texans in Harris County who’ve suffered from price-gouging during the winter storm after hearing reports of massively overpriced water and rental homes that still have power charging upwards of $1,000 a night for shelter during these miserable times.

“Let me be clear: If my office finds your business price-gouging, selling or leasing fuel, food, water or other necessities at an excessive price, we will call you out. We will stop you. And when appropriate, we will go to court,” Menefee warned. He said county residents who spot price gouging can report it by texting 346-354-7459 or by heading to the county attorney’s website.

County meteorologist Jeff Lindner also explained during the county press event that Thursday should bring slightly warmer temperatures in the 40s to the Houston area, but warned Wednesday night could deliver more treacherous black ice as roads freeze over once again, which is more likely in the northern parts of the area above I-10 and slightly less likely further down south. He also said a hard freeze is still possible Thursday night or Friday morning.

“And then we warm up and we get back to our normal Texas weather,” Lindnder said. “But just to be clear,” he continued, “we’re still going to have challenges and hardships that go beyond the end of the weather part.”

Beef: it's what's for dinner (even if it's grilled on a barbecue outside your powerless house).
Photo by Abby Downing-Beaver
click to enlarge

Hope the folks who cleared out these fridge sections don't lose power soon.
Photo by Doogie Roux
KEEP THE HOUSTON PRESS FREE... Since we started the Houston Press, it has been defined as the free, independent voice of Houston, and we'd like to keep it that way. With local media under siege, it's more important than ever for us to rally support behind funding our local journalism. You can help by participating in our "I Support" program, allowing us to keep offering readers access to our incisive coverage of local news, food and culture with no paywalls.
Make a one-time donation today for as little as $1.