A downed stop sign on Washington Ave. showed how strong last night's winds were gusting.
Photo by Schaefer Edwards
In brief remarks updating the public on Harris County’s response to Tropical Storm Nicholas, Harris County Judge Lina Hidalgo on Tuesday warned residents without power that they may not have their electricity restored any time soon, as CenterPoint crews will not be sent out into the field until the strong winds brought by the storm subside. She reiterated her request that residents stay home today to keep roads clear as possible.

"If you can avoid being out on the road, stay at home," Hidalgo said, citing debris and fallen branches on several local roadways. In response to a question, she said the county hadn't received any reports of anyone being injured or killed as a result of the storm.

Houston Mayor Sylvester Turner said CenterPoint has already requested additional lineman to head in as soon as it is safe to do so to get power restored as quickly as possible, but admitted that prolonged outages were expected across the city of Houston. Lots of falling tree branches across greater Houston have been part of the cause of widespread outages.
Photo by Schaefer Edwards
click to enlarge

Hundreds of thousands of folks were without power Tuesday morning.
Screenshot


In an update posted Tuesday morning, CenterPoint blamed the widespread outages on the storm’s intensification overnight “with strong sustained winds that exceeded more than 75 miles per hour and gusts over 90 miles per hour” across the electricity provider’s service area. The highest number of wind-induced outages have been reported in the southern, central and eastern parts of the greater Houston area.

Lots of downed fences from Nicholas' winds laid crumpled outside local construction sites.
Photo by Schaefer Edwards
“We are committed to restoring service to our customers as safely and quickly as possible. However, patience will be important as some areas of our system and equipment may be difficult to reach for our crews due to safety-related issues, such as downed trees,” said Kenny Mercado, CenterPoint’s Executive Vice President of Electric Utility in a statement Tuesday morning. “Customers do not need to call us to report outages, our smart meters tell us which customers are out. We ask that everyone please keep phone lines open for electric or natural gas emergency calls only.”

CenterPoint confirmed reports that its crews who had been servicing power outages in Louisiana caused by Hurricane Ida had returned to Texas to lend a hand. “Our Electric Operations mutual assistance crews that were helping in Louisiana have all returned to Houston to assist with the company’s response,” Mercado wrote. 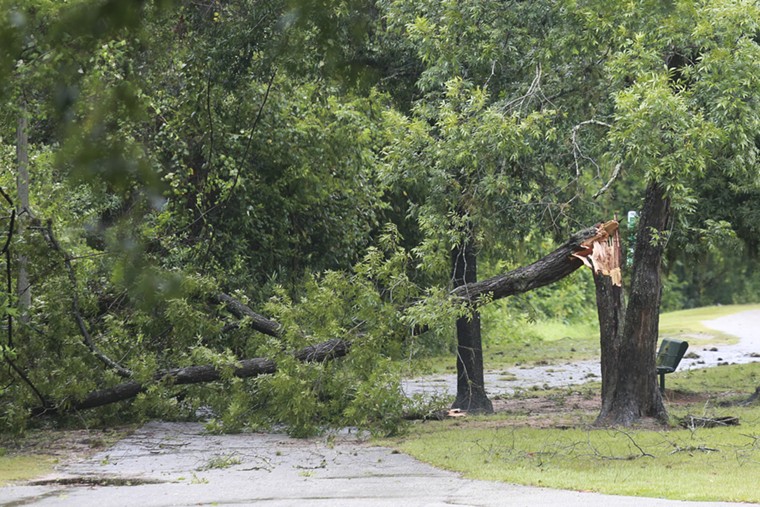 Trees sustained some serious damage in Terry Hershey Park off of Eldridge.
Photo by Reggie Mathalone
Turner said that CenterPoint officials have told him the power provider has requested an additional 2,000 lineman to come to Houston to assist in power restoration; Those lineman should arrive at some point Wednesday, Turner said.

Lots of downed fences from Nicholas' winds laid crumpled outside local construction sites.
Photo by Schaefer Edwards
Citing widespread power outages in the Houston area, Rice University shifted course early Tuesday morning and announced through its Rice Alert system that all Tuesday classes were cancelled. Rice originally planned to offer classes remotely on Tuesday, which some students still thought was the plan Tuesday morning due to the fact that they did not receive the alert that classes had been cancelled before their morning classes were scheduled to begin. 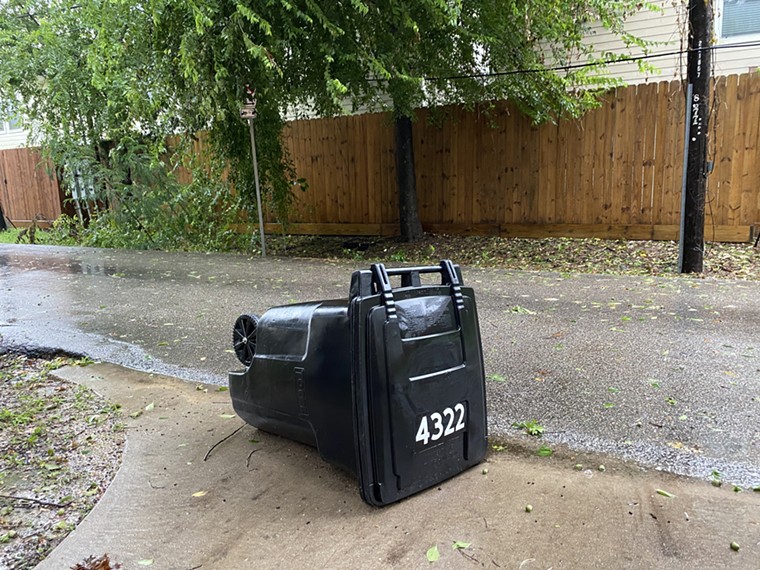 Toppled trash cans proved not everyone heeded the city's advice to bring their bins in early.
Photo by Schaefer Edwards
Turner announced that METRO public transportation service — except for park-and-ride bus service — was scheduled to resume at some point later this afternoon. He said that while around 152 flights were cancelled Monday and 242 flights cancelled Tuesday, city officials expect all local airports to be fully operational later today.

“People should check their flights, but we expect airports to be fully operational by 2 or 3 [p.m.],” Turner said.

Overall, local officials seemed relieved to primarily be dealing with restoring downed power lines as opposed to the potential widespread flooding across the greater Houston area that some forecasts predicted.

“We were prepared, and we stayed lucky. The Lord smiled on the city of Houston,” Turner said.

A broken house gate was found in Camp Logan. A lot of residents woke up to downed fences Tuesday morning.
Photo by Reggie Mathalone
KEEP THE HOUSTON PRESS FREE... Since we started the Houston Press, it has been defined as the free, independent voice of Houston, and we'd like to keep it that way. With local media under siege, it's more important than ever for us to rally support behind funding our local journalism. You can help by participating in our "I Support" program, allowing us to keep offering readers access to our incisive coverage of local news, food and culture with no paywalls.
Make a one-time donation today for as little as $1.