Restored Power Across Houston Area Brings Hope To Many, But Water Issues Linger 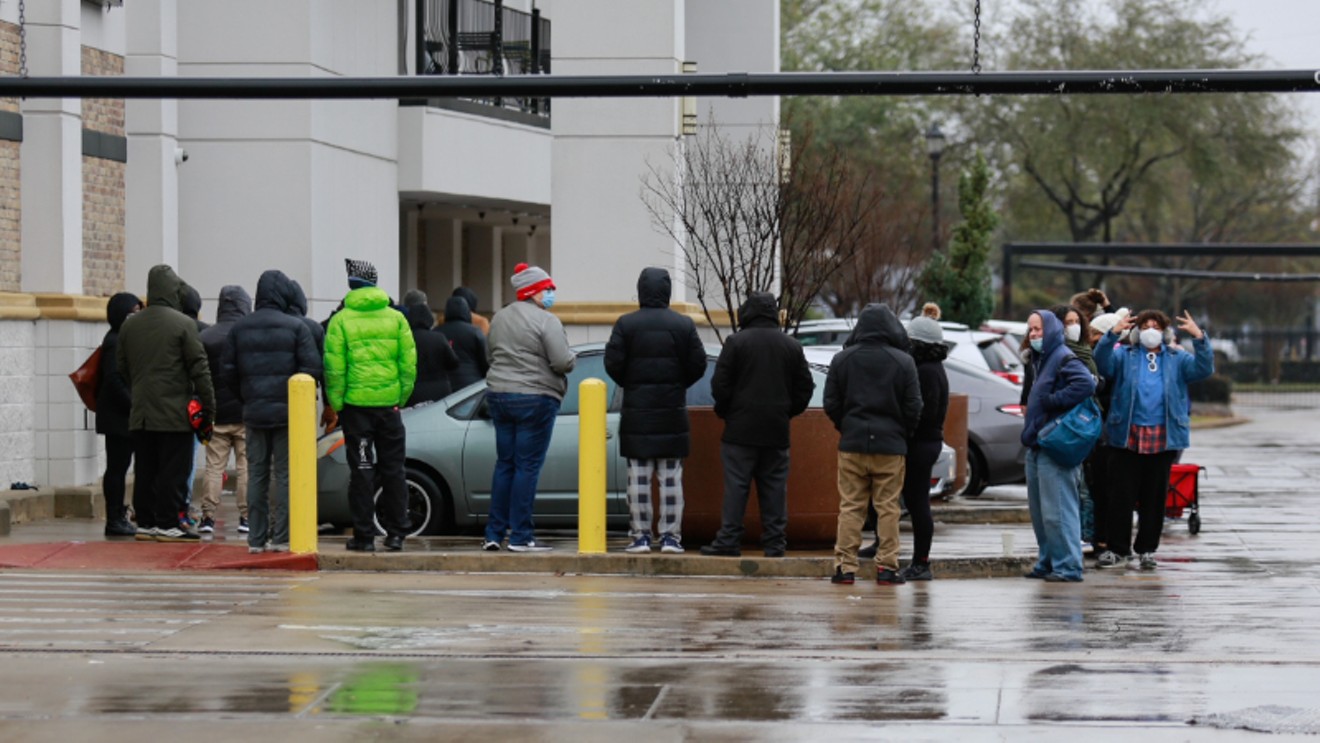 Houstonians took advantage of the Wednesday thaw to line up for supplies at the Midtown Randall's. Photo by Reggie Mathalone
For the first time since this nightmarish winter weather punched Texas square in the jaw three days ago, there’s finally a bit of light peeking out of the end of the tunnel as most of the Houston region saw a reprieve from icy precipitation and electricity began flowing again for many residents overnight.

Around 9:30 p.m. Wednesday, CenterPoint Energy had restored power to 75 percent of its customers in Houston and surrounding areas. By Thursday morning, that number had climbed to 98 percent. By 9:16 a.m. fewer than 40,000 CenterPoint customers were powerless. ERCOT (the Electric Reliability Council of Texas) reported that the majority of Texans had power buzzing through their homes Wednesday morning.

“We will keep working around the clock until every single customer has their power on,” promised the grid operator’s senior director of operations Dan Woodfin.

GREAT NEWS: Most Harris County homes have power right now. 46k in our region are still down.
There's still a possibility of power losses, but that has been reduced. Centerpoint tells me that everyone cut because of #ERCOT orders is back on. Crews are working on remaining homes.


CenterPoint has been quick to caution that even though power was coming back online, Texas still isn’t close to 100 percent power generation, so there’s still the chance of shorter rolling blackouts from 15 minutes to an hour across the Houston area for the next several days. But luckily, it appears that most local residents won’t have to deal with several days straight without power anymore (knock on wood).

The good news on the power front isn’t just limited to our neck of the woods — PowerOutage.us reported Thursday that 485,865 Texans were without power as of 9:09 a.m. That’s still far too many people without power and likely heatless during these still chilly conditions, but it represents a huge improvement from the approximately 3.3 million state residents without power on Wednesday.

Despite the warming weather and the promising progress on the electricity front, water remains a serious issue locally and across Texas. Most of the city of Houston is still under a boil water notice, but Mayor Sylvester Turner said that the city has been able to bring on extra power generators to pump-up the local water pressure since Wednesday night. Even if local water pressure gets high enough to get H20 flowing to city residents by end of day Thursday as Turner predicted Wednesday, it’d still take an extra 24 hours after that to meet state requirements for water purity, the final hurdle to lifting the boil order.

Harris County’s weather wizard Jeff Lindner highlighted some of the damage sustained by local water supply systems due to the ulta-cold weather that’ve cause the region-wide pressure issues:

Some images showing the damage from the extreme cold to our water supply systems. Damage is extensive #houwx #txwx #hounews pic.twitter.com/9MhoUCFpv1


Turner wrote Thursday that the city plans to distribute safe drinking water to residents later that day, with additional details forthcoming. He also once again asked folks lucky enough to have power and water to conserve both resources as much as possible to help keep local hospitals up and running and to make sure city fire hydrants have enough pressure for firefighters to rely on them.

City and other partners will start distributing water at a number of locations today especially for people who cannot afford to purchase. Locations will be announced. Would encourage others who can to do the same. st


And in case anyone has been tossing and turning worried about how Houston’s proudest son Ted Cruz is faring during these trying times, you can rest easy knowing that the junior senator from Texas made it safe and sound to Cancun Thursday night:


Just confirmed @SenTedCruz and his family flew to Cancun tonight for a few days at a resort they've visited before. Cruz seems to believe there isn't much for him to do in Texas for the millions of fellow Texans who remain without electricity/water and are literally freezing. pic.twitter.com/6nPiVWtdxe


After getting a fair bit of backlash from the Twitterverse for jet-setting down to Mexico during the worst weather crisis his state has faced in years, it appears Ted is heading back to Houston later this afternoon:


Here’s the upgrade list for this afternoon’s flight from Cancun to Houston.

That’s assuming that “cru, r” is him. And I do. pic.twitter.com/CqfKa5rJfG


Guess paradise isn’t all it’s cracked up to be.

Stay safe and do your best to keep your critters warm, Houston.
Photo by Reggie Mathalone
KEEP THE HOUSTON PRESS FREE... Since we started the Houston Press, it has been defined as the free, independent voice of Houston, and we'd like to keep it that way. With local media under siege, it's more important than ever for us to rally support behind funding our local journalism. You can help by participating in our "I Support" program, allowing us to keep offering readers access to our incisive coverage of local news, food and culture with no paywalls.
Make a one-time donation today for as little as $1.